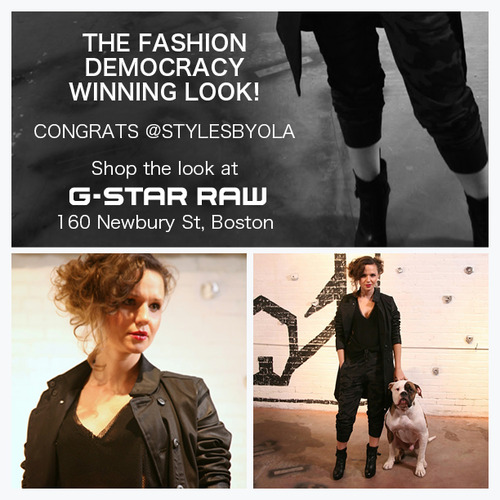 A packed house at G-Star RAW Boston on Newbury Street to vote on Instagram for their favorite FW14 styles in an interactive fashion event produced by DressCode Boston.

[huge_it_slider id=”10″] Two days before the event, the models gathered at PhillipoStyle in Boston South for an epic photo shoot, which wouldn’t be revealed until the show. The images were uploaded to @gstarboston Instagram, simultaneously, as each model revealed their Fall and Winter styles to the in-store crowd. The attendees and online followers cast their votes with each “Like” of the image of their favorite looks. Congratulations to Ola Munia for winning the competition.

After the final walk, the party continued and so did the Instagramming. Event guests browsed through the store racks, enjoying cocktails by Deep Eddy Vodka, and the music of DJ Alexander Padei. Meanwhile, the models gathered on the back stairway and roof of the building for another live photo shoot.

The event showcased G-Star RAW through a range of styles to which all Bostonians can relate. From preppy, military-inspired, biker looks to bohemian styles, DressCode Boston wanted to articulate the brand’s lifestyle and inspiration of “core denim range with a sophisticated tailored line that emphasizes proportion, craftsmanship and detailing.” Mission accomplished. [Not a valid template]