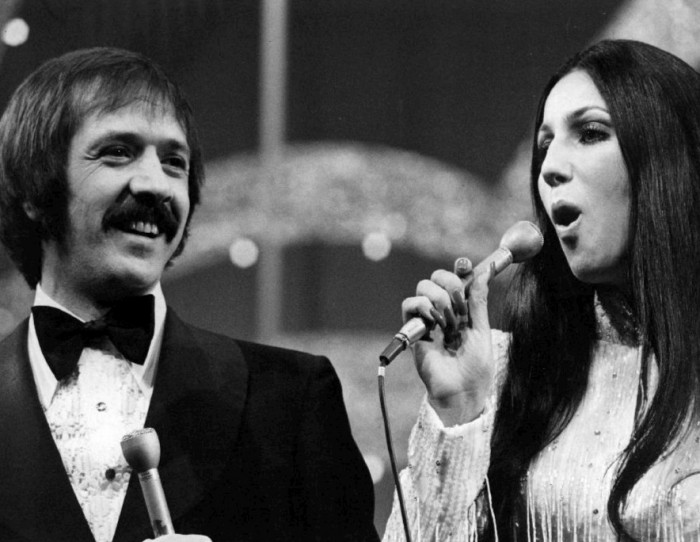 Sonny and Cher broke up.  Then Donnie and Marie went off the air. That’s when I knew the world wasn’t all sunshine and roses. I was alone. I was adrift among boring people who were not a little bit country, nor were they a little bit rock ‘n’ roll. They didn’t have long, black, sleek hair and narrow waists and tiny slits for belly buttons. It was a sad world. I wasn’t with raconteurs who could playfully banter back and forth. The world I was in moved slowly and lacked rhythm and sludged along like a broken worm.

I was eight. I knew I needed excitement. I knew that there was more out there than puffy cheese bake and my sister’s hand-me-downs. It was right there on the part TV/ part table: sitting right under Grandma Barbara’s ceramic Christmas tree was a cathode ray window to a life bursting with possibility and sequins and feathered hair.

I lay my head back on my Wonder Woman pillowcase and pulled my blue and white striped blanket that my great-grandma Ellen had knitted for me up to my chin. She was 95. The oldest person I ever knew. She said that if she ever went blind and couldn’t knit, she’d rather die. I thought that was a fair thing to say because it was clear that she loved to knit. She had knitted blankets for all of my nine brothers and sisters.  Eventually, she did go blind and she did die. 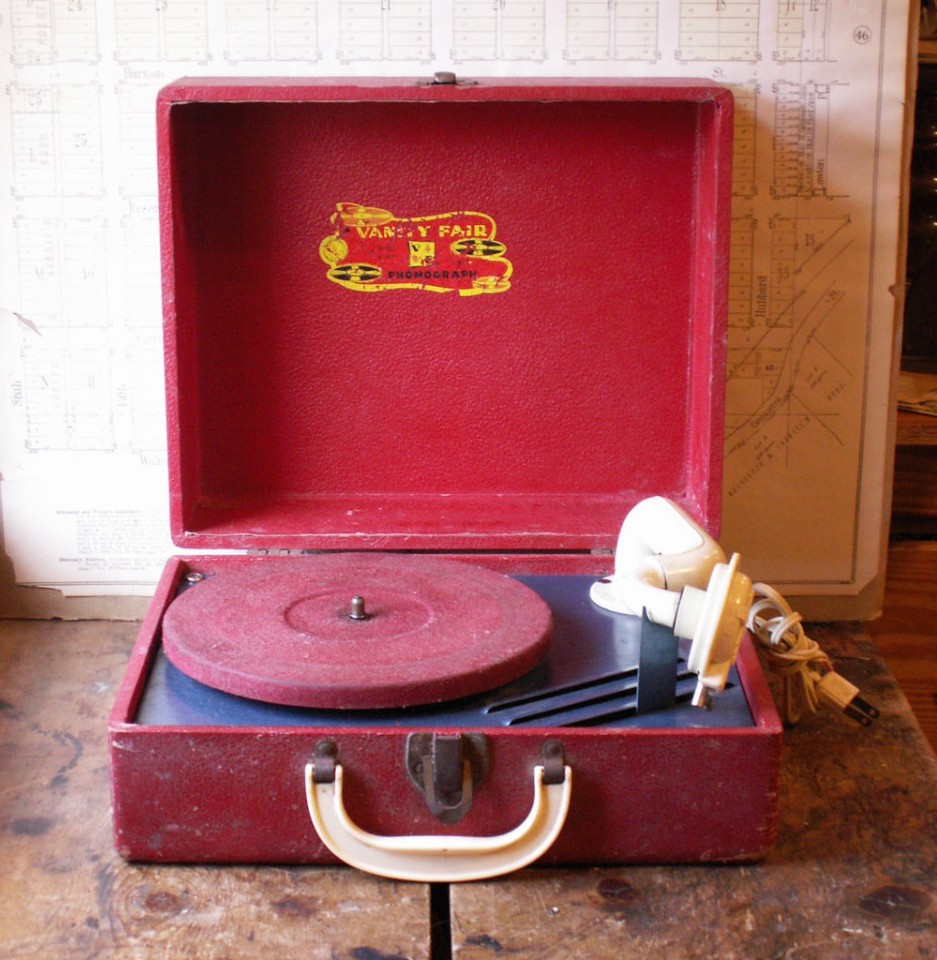 I stared up to the plaster ceiling – the one with the swirls and points that looks like frosting.  I thought, “How do I get out of here?” I looked at my pink record player spinning unevenly and the needle doing its best on a warped surface as it played the soundtrack from “Bambi.” It was about the twelfth time I’d played it. I didn’t particularly like it, but it was the only record I had. It was the day after Christmas. I had opened the “Bambi” record just as my older sister, Sue, was opening her “Grease” album. I thought that was a really stupid thing for my Mom to do. I liked “Grease,” too. I just wasn’t allowed to see the movie because it was too racy. “Bambi” was for babies.  Sue told me all about the movie anyway and the pictures on the album told the story. There was this proper looking pretty girl in bobby socks and saddle shoes who transformed into a sexy, leather-wearing, wild-haired bombshell. I didn’t get it. Killing Bambi’s mother was ok? The mere thought of it put a giant lump in my throat that I couldn’t swallow past.

So, after Sonny and Cher and Donny and Marie, I guess the record was just the straw that broke the camel’s back. I knew I had to run away. But how? Even though Br’er Bear told Br’er Rabbit, “You can’t run away from trouble.” I knew I needed to get the hell out of dodge.

This place, where I had to pick up after myself, where my sister got better presents under the tree, where my brothers were getting too strong to wrestle and where life was drab and dull and you could get in trouble for just sticking your finger in the peanut butter jar, was clearly not for me. Everyone else was downstairs playing with their new toys. 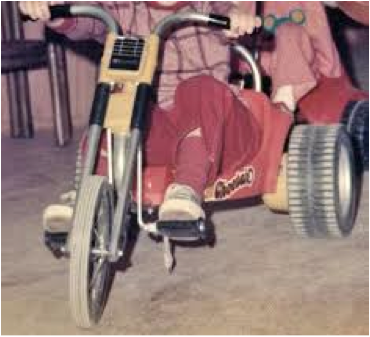 I could hear my brother riding his Big Wheel down the hall and “Bambi” was not doing a good job drowning out “Grease.”  My sister had it blaring on the stereo in the living room and she was practicing her ballet recital to “Summer Nights.”  The smell of the pot roast wafted up the stairs and into my room.

I thought about things that would be practical to take. A couple of bathing suits, my favorite Barbie, my piggy bank. I had been saving up for this day. The piggy bank was going to be a problem because it was really heavy and about the size of a football. My brothers had claimed I stole a lot of the coins from their room but I didn’t consider it stealing when my life was at stake and my future hung on a teetering see saw in the balance. 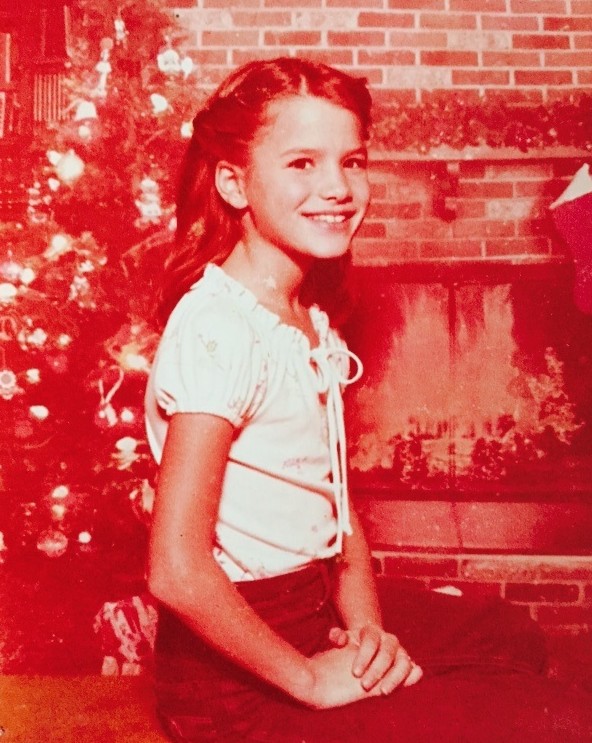 No one even noticed when I tip-toed down the stairs, carefully skipping the step that made a loud creak. I hated hats and mittens. They just made me itch. I did have my sister’s hand-me-down plaid coat with a hood and her hand-me-down Barbie rubber boots. I closed the door quietly just as my brother, wearing a Daniel Boone hat with the raccoon tail came roaring down the hall on his Big Wheel.

“Why do you want to run away?” My mom had spotted me out the kitchen window. I hadn’t planned my exit strategy that well. I should have used the back door. She approached me in the yard just at the edge of the woods; because I wasn’t “running away”, I was just walking away. Her moo moo was see-through and her arms had goose bumps since she had only draped one of the many afghan blankets across her shoulders. Her rabbit slippers barely covered her feet.

She eased herself down on the bench to the picnic table. She moved like she was pregnant even though she wasn’t. My younger brother was five.

Words couldn’t form so I just shrugged my shoulders to my ears. “Are you upset?” I could see she was mocking me.  “Are you not happy here?” I stared at her but there were so many problems I didn’t know where to start. “Well,” she said, “What did you pack? Can I see?” I handed over my fairy princess suitcase. She unclicked the latches and the hinges splayed open on the frozen front lawn revealing the satin pink fabric inside and my important belongings. She started to smile but caught herself because she knew she was this close to losing her ninth child to the unknown. “There’s not much in here to stay warm at night.” She was right. I had actually meant to grab my Black Beauty sleeping bag but forgot. “And, what about food?” I glanced at my piggy bank. “Oh, that was smart.” I nodded.  “But maybe you should get some food from the pantry in case you’re walking a long time before you get to a store.” She rose from the bench and I got a faint hint of her sweet mom smell as she moved.  I followed her into the house. “Maybe we should make those Christmas cookies we never got around to making.” She held the door for me.  “You could take them with you.” My Mom’s tone was fun. Even excited. I knew that cookies weren’t practical for running away and a box of cereal would be better but I was actually hungry. I could almost taste the cookie dough. “I will run away another time,” I thought. 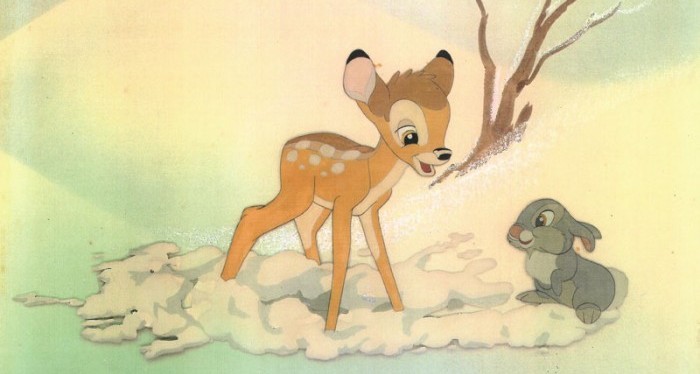