You really can live like royalty in a castle in Spain…at least for a night or two.  Since the 1920s, the Spanish government has run a for-profit chain of luxury hotels which is officially called Los Paradores de Turismo de España.  While the word parador literally means a “place to stop,” you will find that this hardly describes the overnight experience in many of these 94 historic convents, castles, monasteries, stately homes and other monumental buildings that spread across the Spanish countryside from Galicia to Andalucia, and beyond, to the Balearic islands.

Here are a few of my family’s favorites:

In Cardona, you can visit not only a splendid castle but also the nearby salt mines whose productivity financed it.  The “Muntanya de Sal” (Salt Mountain Cultural Park) is a great family excursion underground, where you can visit the source of the all-important ingredient of seasoning and preserving foods that was once worth its weight in gold. The parador itself, which was the fortress home of the Lords of Cardona, who were wealthy salt barons since the Middle Ages, overlooks the plain of the Cardener river valleys in northern Catalunya, near the Pyrenees.

The town of Cuenca, about 140 kilometers east of Madrid in Castilla-La Mancha, boasts an elegant parador in the former convent of San Pablo.  Perhaps as impressive as its rich interior is the view that greets you when you emerge from the front door: across the sixteenth-century Puente de San Pablo (Bridge of Saint Paul) is the 15th-century neighborhood known as the “hanging houses” of Cuenca.  One of these gravity-defying structures houses a first rate collection of mid-century modern art in the Museum of Spanish Abstract Art (Museo de Arte Abstracto Español), part of the Juan March Foundation.

[ezcol_1half]For visitors to Andalucia who choose to stay outside urban centers like Seville or Córdoba, the enchanting parador in Carmona, which lies between the two cities, offers a delightful option.  Housed in a stunning 14th-century Arab fortress, the parador boasts of one of the best restaurants in the region, housed in the former refectory of the castle.  (We recall it fondly as the first place we tasted the local specialty, ajo blanco, which is a refreshing white variation on its cold-soup cousin, gazpacho.)  When you get tired of the pool with its view of the castle hovering overhead, check out the nearby ruins of the Roman necropolis in Carmona.[/ezcol_1half] [ezcol_1half_end] 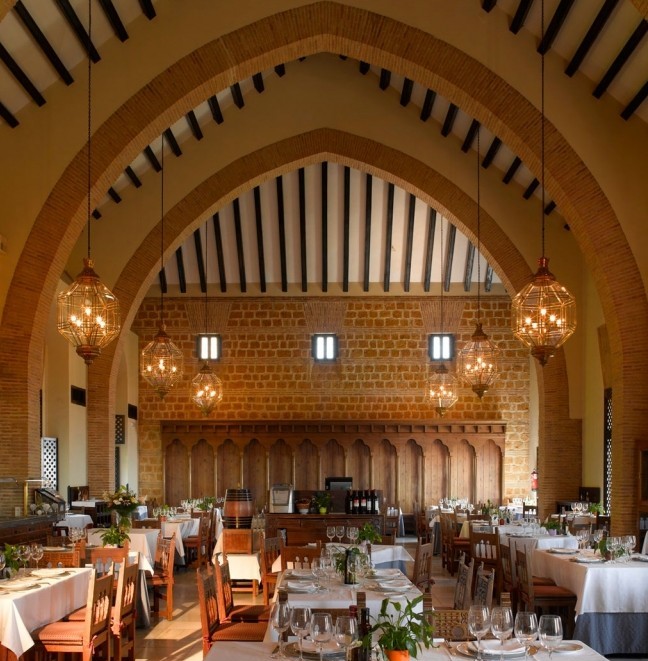 [ezcol_1half]If money is not a concern in your travel budget, you might consider spending a night in one of the two most luxurious paradores: those in Santiago de Compostela in the north and Granada in the south of Spain.  The former, officially called the Hostal de los Reyes Católicos, occupies pride of place on the main square of the historic city in Galicia and is considered to be the longest-running hotel establishment in the world.  Built by Ferdinand and Isabella (hence the name) next to the cathedral in Santiago as a royal hospital in the 1490s, it sits at the end of the pilgrimage route across northern Spain.  Its fine restaurants occupy spaces that were once the stables and the morgue.[/ezcol_1half] [ezcol_1half_end] 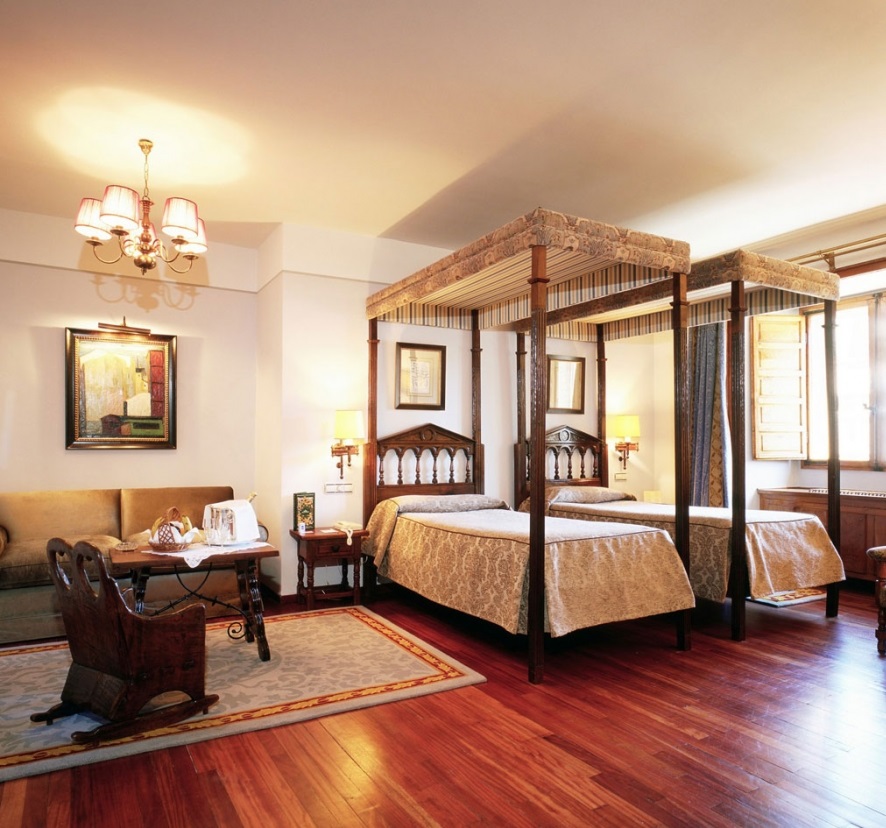 In the heart of Andalucia, the Parador de Granada, besides being a honeymoon destination for Princess Grace and Prince Ranier in 1956, sits smack in the middle of the grounds of the enchanted Alhambra.  It started life as a 14th-century Moorish palace, and was a Franciscan convent before becoming a parador.  Like the rest of the Alhambra (one of my favorite destinations in all of Spain), the hotel grounds are filled with trickling fountains and sweetly scented gardens of jasmine and flowers.

Not all of the renovated buildings in the system can boast of equal charms, however.  While the Parador of Ronda in Andalucia sits atop a spectacular piece of real estate, hanging over the edge of the town’s famous gorge, the hotel itself is the former city hall, a building of no great distinction, save its enviable location.  We also once found ourselves booked into one seaside parador near Valencia which did not have beach access and whose architecture was more like a Holiday Inn than a castle.  So do your homework before making your reservation, and check with those advisor sites.

Portugal, by the way, has s similar system called the POUSADAS modeled on the Spanish example.

Okay, you can also find a swell place to stay through home rental sites, but, come on…a castle in Spain!