All eyes are on the energetic – and telegenic  — Andris Nelsons when he bounds across the stage of Boston Symphony Hall to take his place at the conductor’s podium, his sheer physicality a performance unto itself. At 35 years old, Nelsons is one of the youngest and most electrifying conductors on the international scene today and the youngest music director to lead the BSO in more than 100 years. He might also be the only one to have ever been a student of martial arts. Prior to his arrival in Boston, the Latvia native was music director of the City of Birmingham Symphony Orchestra (CBSO), where he earned critical acclaim. Born in Riga to a family of musicians, Nelsons began his career as a trumpeter in the Latvian National Opera Orchestra before studying to be conductor. He is married to the internationally renowned soprano Kristine Opolais, who joined him on stage for his first opening night leading the storied Boston Symphony Orchestra.

AS A YOUNG CONDUCTOR, WHAT DID THE BOSTON SYMPHONY ORCHESTRA MEAN TO YOU? WHAT WERE YOUR FIRST IMPRESSIONS?

As a music student growing up in Latvia, I was aware of the leading position of the Boston Symphony Orchestra (BSO), one of the world’s greatest orchestras. I followed the careers of several BSO‘s legendary music directors, especially Serge Koussevitzky, Charles Munch, Erich Leinsdorf, and Seiji Ozawa, and more recently, James Levine. I remember listening to many BSO recordings and feeling overwhelmed by the extraordinary performances.  I never imagined that I would become this orchestra’s music director!

WHAT’S BEEN THE BIGGEST SURPRISE ABOUT BOSTON AUDIENCES FOR YOU SO FAR?

The enthusiasm that the Boston audiences has shown to me, has touched me deeply. I have always heard that the Boston audiences were passionate music lovers—and it is very true!  They also are generous in expressing pride and love for the orchestra. The BSO has been a great inspiration and joy for many of our patrons. My hope is to do all I can to continue to inspire them to ever greater levels of satisfaction and reward. 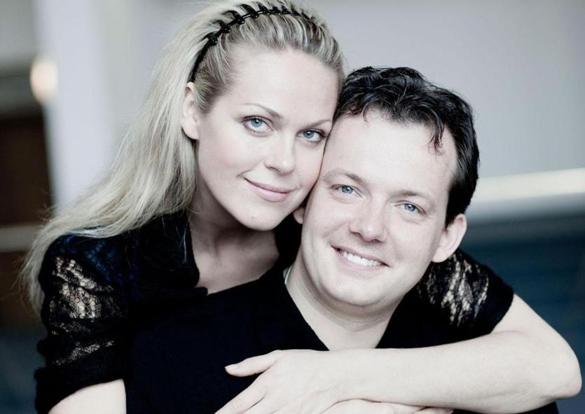 IS THE ORCHESTRA DIFFERENT TODAY THAN WHEN YOU FIRST GUEST-CONDUCTED IN 2011?

I don’t know that I can speak to how different the orchestra is today than it was in 2011.  When I conducted the orchestra for the first time in March 2011, I was overwhelmed by the beauty and power the orchestra displayed in Mahler’s Ninth Symphony.  It is a very difficult piece of music, but we developed quickly a good connection and were able to make incredible music together. My joy nearly four years later comes from getting to know the orchestra better. I enjoy meeting and getting to know each individual musician, knowing them by name. This helps us work better together and make some great music.

WE’RE IN THE AGE OF “NEW” MEDIA. DID YOUR TRAINING AS A MUSICIAN AND A CONDUCTOR PREPARE YOU FOR YOUR NEW ROLE AS HOLOGRAM AT SYMPHONY HALL?

I have never participated in the creation of a hologram before, so it was fun to see how they created the 3D image. It’s both strange and exciting to stand next to your own talking and moving hologram – and I was happy to see that I have lost some weight since recording the image last July! I hope our wonderful patrons enjoyed this technology, and that the hologram and overall exhibit communicated some interesting and new information, especially to newcomers to the BSO.

IS THE ROLE OF CONDUCTOR OF A WORLD-CLASS ORCHESTRA OF THE 21’ST CENTURY DIFFERENT THAN IT WAS FOR YOUR HISTORIC COUNTERPARTS?

I would say that it is a faster moving world today, of course it is, and this pace applies to all aspects of modern life! However, in contrast, the fundamental role of the conductor has not changed so much at all on the podium. This profession is still based on personal communication and it rather stands the test of time in this sense. It’s such a magical and of historic profession.

BOSTON HAS A REPUTATION FOR BEING A FAIRLY TRADITIONAL CITY. CAN YOU GIVE US A PREVIEW OF ANY EXCITING, NEW WORK YOU’LL BE INTRODUCING?

The Boston Symphony Orchestra has always presented many new interesting compositions with major composers as Bartok, Hindemith, Stravinsky, Babbitt, Birtwistle, Carter, and Saariaho, and many others, and also significant premieres.  So there is no doubt that with the great repertoire that we all love so deeply—music of Brahms, Beethoven, Tchaikovsky, etc.—we will also explore works by new composers and go back to some of the works of the 20th and 21st centuries that have made the recent history of classical music.  Sophia Gubaidulina’s Offertorium is a great example of bringing back a late 20th century work that is now considered a masterpiece of our field—and Baiba Skride’s recent performances captured the extraordinary sound of Ms. Gubaidulina’s composition. This season we’ve also programmed works by Boston composers Gunther Schuller, John Harbison, and Michael Gandolfi, as well as works by Australian composer Brett Dean and my Latvian compatriot Eriks Esenvalds. Our audiences have responded very enthusiastically to what we have performed so far. We will continue to explore new works and bring the very best of music to our wonderful patrons.