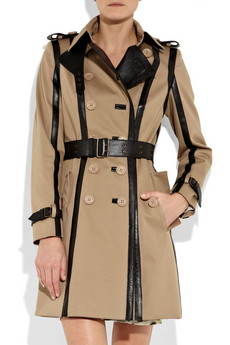 Here, in his thousandth iteration of a trench, Bailey would have us believe that, to think!, little of what we own can stand up next to the cool of this: the newest, the freshest, the yes-it-is-actually-cooler-than-what-I-own-damn-it-damn-it-damn-it.

But to me, a double-breasted, belted trench presents conflicting statements: the polished lady-who-lunches and, at the same time, a mysterious femme fatale. Each has its own sex appeal. (Who doesn’t wonder what’s under that jacket, if anything?)

This time, it’s the leather trim that adds a greater depth to my already complex consideration. Is she the tough, chic modern girl, stomping about the city, taking down anything, or anyone, who gets in her way? Or a classic, calculated, lest-you-forget-my-zipcode, conservative but chic “lady”? Or maybe both?

Wish I’d thought of that sooner.