It’s not always easy being a vegetarian in Spain. Because I also eat fish and seafood–and I live in Barcelona, which is smack on the sea–it’s a challenge, but it’s not impossible. In Madrid, I would call it impossible. There is a big deli there, for instance, called El Museo del Jamón.  Generally, all over Spain there is a general suspicion of those who do not follow the cult of the slaughtered cow and pig. That small club would include both my husband U.B. and me.

So, we greet with joy the discovery of an extraordinary Spanish dish that is not based on meat. And there is a family of soups whose ingredients have never been near a pig.  The chilled soups are a refreshing thirst-quencher in the parched southern reaches of Spain’s Andalucia, where summer days can be broiling. 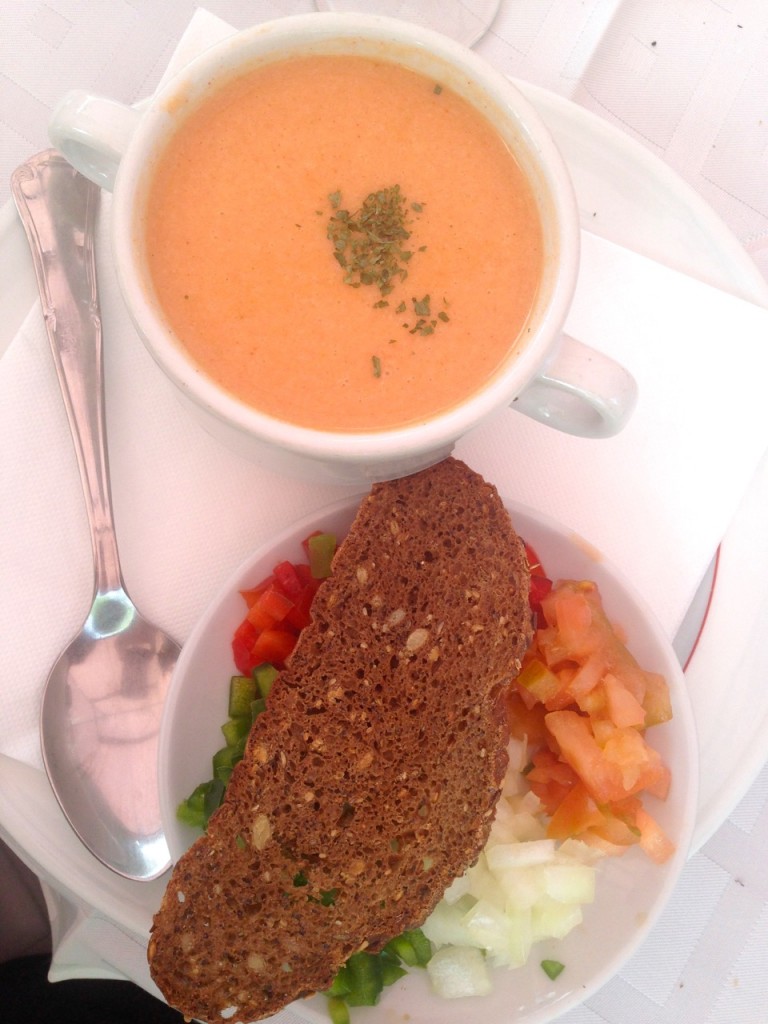 Everybody knows about gazpacho, the perfect chilled tomato-garlic-and-vegetable first course on a hot day, and in Spain it is as readily available in the local grocery store as orange juice.  My family slugs it down right from the carton if we’re on the road, and it’s one of our daughter Stassa’s favorite after-school snacks.  Still, nothing beats the homemade version, which is not difficult to make in either a blender or a food processor; recipes abound on the Internet.  Crucial to its success is the crunch factor of the accouterments that you add when serving gazpacho at your table:  diced green (or red) pepper and cucumber, little cubes of fresh tomato, and crispy croutons of bread that have been toasted with olive oil.  I like a sprig of rosemary or basil in mine.

The other tomato-based soup that has not found the international fame of its cousin gazpacho is called salmorejo.  A search for the etymology of the word led me nowhere, but it almost certainly has something to do with salt (“sal”) in spite of its being not exceedingly salty.  When I plug the word salmorejo into Google translate, the English translation is…(fanfare): “Gazpacho!”

As far as I can tell (after hundreds of tastings), salmorejo, whose origins are in the Andalucian city of Córdoba, varies from its more famous cousin mostly in the inclusion of a higher proportion of bread amongst its ingredients, which renders the soup a slightly lighter shade of red, and considerably thicker, than your average bowl (or glass) of gazpacho.  The ingredients list is also shorter, focusing on vine-ripened tomatoes, green olive oil, garlic and bread.  It is often garnished with cubes of ham and hard boiled egg.

An unsung cousin to the red chilled soups is little known outside of Andalusia, and almost completely unheard of outside of Spain.  The secret of the creamy white, refreshingly chilled ajo blanco or “white gazpacho” summer soup seems to be well guarded.

U.B. and I first discovered ajo blanco in the swank restaurant of one of Spain’s most charming paradores, a converted fourteenth-century Moorish castle in Carmona, outside of Seville. Since my lactose-tolerance is not high, I at first shied away from the white soup in spite of U.B.’s swooning response to it. Only after asking the waiter, “Que es esto?” and hearing the list of ingredients, did I dive in and become a life-long fan.

Ajo blanco is more than the sum of its parts. In fact, the ingredients at first seem to be seriously at odds with each other: Bread. Almonds. Olive oil. Grapes. Vinegar. And of course garlic (ajo).

Here is a recipe, freely adapted from a version that I found at EPICURIOUS.COM:

Toast several slices of country bread without its crusts and soak in a cup of ice water.

Toast about a dozen sliced almonds in a skillet until golden, then grind them in a processor with one clove of garlic.

Squeeze the bread dry and add it to the almond/garlic mixture, along with half a pound of seedless green grapes.

Process until smooth then put it into a bowl and mix it together with 3 Tbsp. of wine vinegar, a half cup of extra virgin olive oil and two cups of ice water.

Strain it through a sieve, forcing as much bread through as possible. Add salt and cayenne pepper, and chill well, at least one hour.

Serve the soup with freshly toasted croutons and more green seedless grapes, cut in half.  I know it sounds weird, but trust me.

Once while traveling around the south of Spain, we came across a thicker, dip-like version of ajo blanco, which is usually a rather thin soup. Quite a surprise and just as yummy.

1 thought on “GAZPACHO AND ITS RELATIVES”