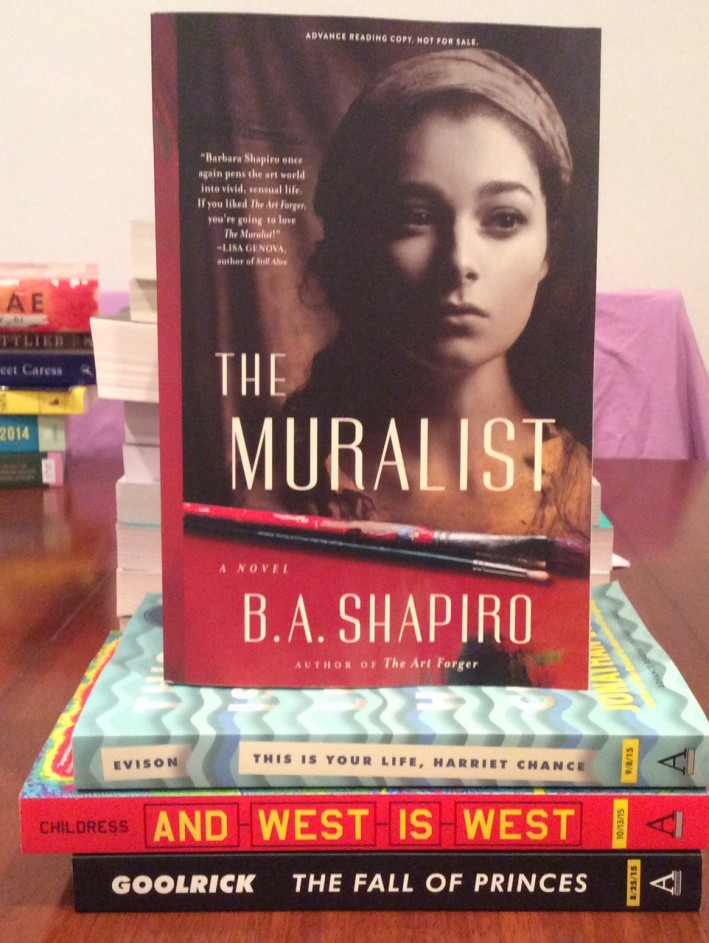 Boston was represented at BookExpo America—right from the start. The line to have B.A. Shapiro sign advanced copies of “The Muralist” snaked around the corner of the Algonquin Books booth on the first day of BookExpo America but the novelist still took the time to chat with her fans. As those with Massachusetts’ ties reached the Boston-based novelist’s signing area, the topic quickly changed to the 1990 heist of the 13 precious works of art, including an important Rembrandt seascape. “I hope that they are found one day. I hope they aren’t lost,” she told one fan from Western Massachusetts. It’s not just a passing interest for Shapiro, who has also taught creative writing at Northeastern and sociology at Tufts. Shapiro’s bestselling novel of a couple of years ago, “The Art Forger,” explored the underworld of art theft and forgery. “The Muralist” is set in 1940 and centers on an American painter who disappears and neither her family living in German-occupied France nor her patron, Eleanor Roosevelt, knows what happened to her. The 352-page book is scheduled to be released on Nov. 3.

Other novels from Algonquin that are already getting notice—and it’s only Day 1 of BEA, the country’s largest book industry convention—are Jonathan Evison’s “This is Your Life, Harriet Chance!” due out on Sept. 8; Ron Childess’ “And West is West,” due out Nov. 13; and “The Fall of Princes” by Robert Goolrick due out Aug. 25.

HarperCollins offered a tease (just a booklet sample) of T.J. English’s “Where the Bodies Were Buried: Whitey Bulger and the World That Made Him,” about the trial of James “Whitey” Bulger, which will be released on Sept. 15. The booklet, copies of which English signed, is the book’s introduction and promises to be a review of Bulger’s “reign of terror.” 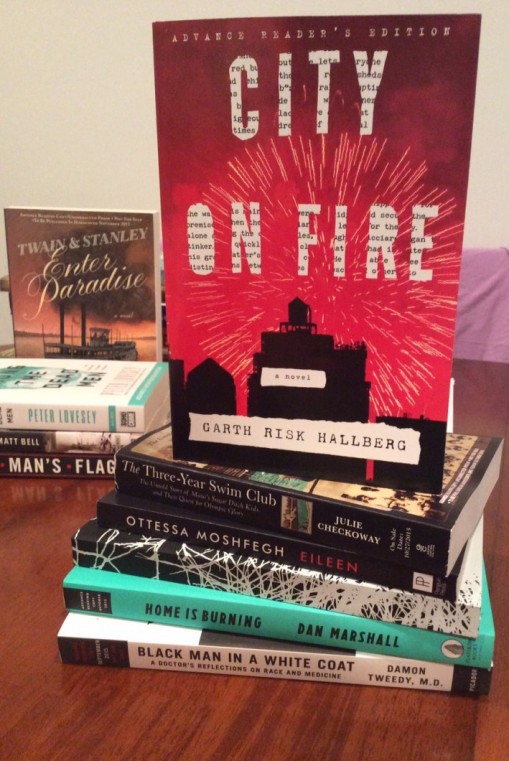 From the BEA Editors’ Buzz Panel: Grand Central Publishing’s release of Julie Checkoway’s non-fiction tale “The Three-Year Swim Club,” due out on Oct. 27, 2015; Dr. Damon Tweedy’s highly anticipated “Black Man in a White Coat,” from Picador, which will be released on Sept. 8; Dan Marshall’s memoir “Home is Burning” will be released by Flatiron Books on Oct. 20; Simon & Schuster’s imprint Scout Press makes its debut with Ruth Ware’s haunting novel, “In a Dark, Dark Wood,” which is due out this summer; “City on Fire,” is Garth Risk Hallberg’s sweeping debut novel set against the backdrop of the 1977 blackout that nearly crippled New York City, which Knopf will release on Oct. 13; and, finally, Boston-based fiction writer Ottesa Moshfegh’s “Eileen,” which Penguin Press will release on Aug. 18. 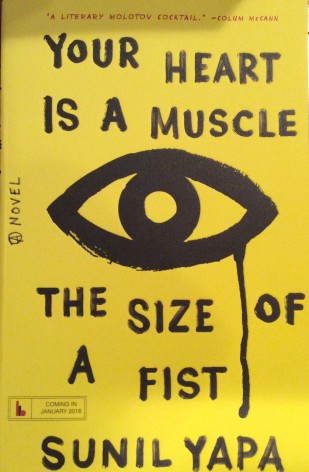 When the convention floor opens on the first day there is a rush—not a run, but at a clip that could quickly turn to a stampede—by attendees to grab the copies of the advanced reader copies (ARCs) of the hottest titles. We didn’t want to miss out so we risked our safety and road the wave of librarians heading toward the Hachette area. For those of you who aren’t “label queens” when it comes to your reading, Hachette is the parent company of Little, Brown and Company, which will publish Sunil Yapa’s anticipated novel “The Heart is a Muscle the Size of Your Fist” on Jan. 12, 2016. The bright yellow cover of this debut novel set against the conflict of Seattle’s 1999 WTO protests was an easy way to spot the literary trophy hunters. And Hachette’s Grand Central Publishing has Pulitzer Prize winner Oscar Hijuelos’ “Twain & Stanley Enter Paradise,” slated to be released on Nov. 3, 2015. In this novel, Hijuelos looks at the real-life relationship of Mark Twain and Sir Henry Morton Stanley. For those who love historical fiction, this will be on their “wish lists.” 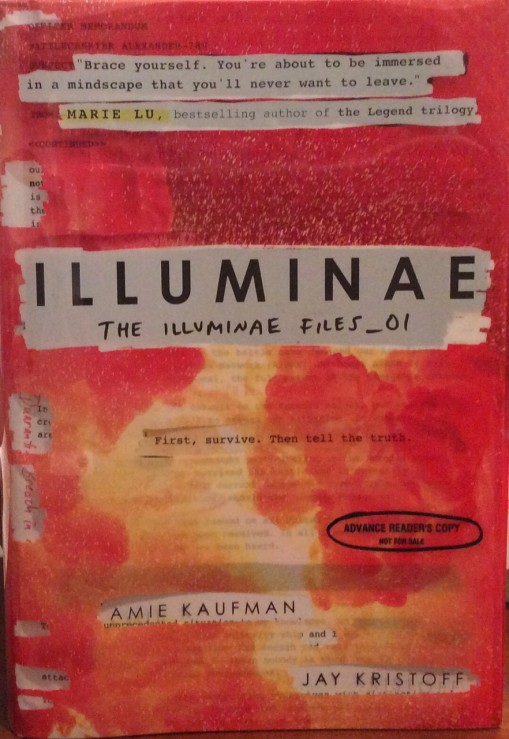 One of the fastest growing segment’s of the publishing industry is the young adult category (called “YA” in the biz) and while it would be impossible to say which title was the hottest, it can be said without fear of argument that Amie Kaufman and Jay Kristoff’s “Illuminae: The Illuminae Files­__01” is a book, from Alfred A. Knopf for Young Readers that will make some waves when it is released on Oct. 20. With an elaborate layout and design, the book is that rare find: it offers enough to get both male and female younger readers to pick up a nearly 600-page book.

Another first day stop is the booth for Soho Press, which is known for finding the brightest new voices in crime fiction, where they were promoting Matt Bell’s “Scrapper,” a novel about a Detroit that never rebounds from its economic depths. Think that might not be enough to base your fall reading list on? How’s this for an opening sentence: “See the body of the plant, one hundred years of patriots’ history, fifty years an American wreck.” Soho also has Peter Lovesey’s “Down Among the Dead Men,” a Chief Superintendent Peter Diamond investigation story, out this July and “One Man’s Flag,” by David Downing, which is a follow-up to his “Jack of Spies.” Set in 1914, “One Man’s Flag” covers a lot of history and territory and works, we were told, without having read the first installment. The book is due out in November. 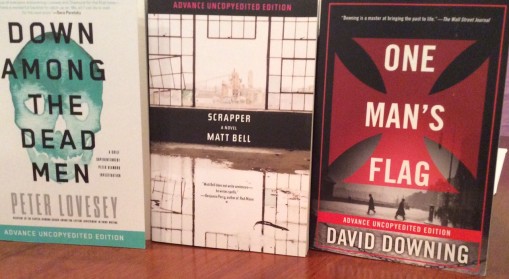 We’ll be back with Day 2’s roundup.