Artist Sara Zielinski uses a variety of media, including painting, printmaking, drawing, collage, and assemblage, to explore both the universality and the complexity of human relationships. Her suggestive combinations of figures and text probe the motives and feelings behind relationships, whether romantic, platonic, sexual, or somewhere in between. At the same time, Zielinski is deeply interested in process. In a world which is increasingly dependent on technology, she deliberately focuses on the tactility and imperfections of the handmade.

Sara Zielinski lives and works in New York City. She has shown at Find & Form, Childs Gallery, and Samsøn Projects in Boston, Mobius and Gallery 263 in Cambridge, and the A.I.R. Gallery in Brooklyn. Zielinski recently transformed her own apartment into an immersive printed environment, covering every available surface with her work. This solo apartment show, ONLY IN HEAVEN, was recently featured in the Huffington Post.

WHO INFLUENCES YOU AS AN ARTIST AND A PRINTMAKER?

Who knows? I regularly revisit works by Frida Kahlo, Henry Darger, Ana Mendieta, and David Hockney. There are a few artists whose attitudes and writings I find myself thinking about almost daily: Tracey Emin, Ray Johnson, and Lee Lozano. With printmaking, I’m inspired by Louise Bourgeois, Tracey Emin, Kiki Smith, and Pablo Picasso. I find their lines to be very expressive. 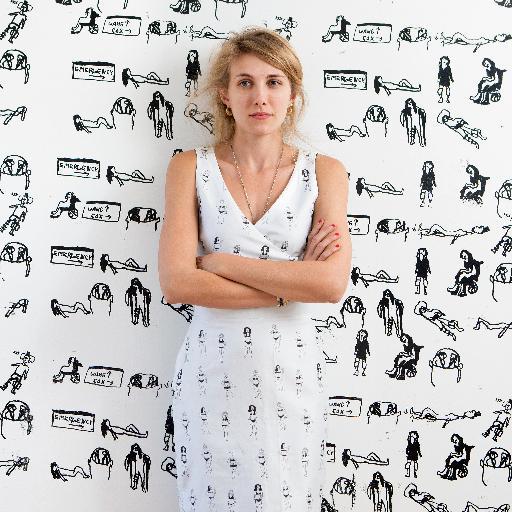 HOW WOULD YOU DESCRIBE YOUR SUBJECT MATTER, AND WHAT IS IT ABOUT RELATIONSHIPS THAT INTERESTS YOU AS AN ARTIST?

My work is about human relationships and things we say and things we don’t say. Relationships, or relating with other people, is one of the most universal experiences. And yet it’s so complicated! We each enter every interaction with our own set of associations and moods and anxieties, leading to any number of outcomes and interpretations. I imagine and express some of the motives and feelings that are often unsaid but can weigh heavily on friendships, romantic relationships, and encounters with strangers. I like to play with the play between relatability and individuality.

HOW DO YOU FEEL ABOUT OTHER PEOPLE’S REACTIONS TO IT?

For the most part, I really enjoy people’s reactions to my work. I learn a lot from what people say in response to it. It’s interesting to hear, say, six people tell you they relate to a text piece and then hear six different reasons for how it speaks directly to them. 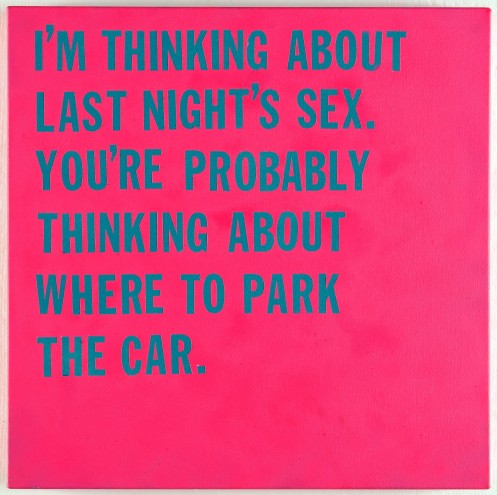 HOW DO YOU INCORPORATE TEXT INTO YOUR WORK? HOW DOES THIS ADD TO OR COMPLEMENT YOUR IMAGES?

Text enters my work naturally, often coming to mind simultaneously with images. Other times, I’ve held on to a phrase for weeks, trying to think of the appropriate image to accompany it. Some of the text I use comes from notes I wrote years ago, originally notes for poems. I studied poetry writing in college so I have a lot of notes to pull from.

Text operates in conjunction with my images in many ways – sometimes it may add ambiguity to a scene, sometimes it provides clarity, sometimes it brings humor. Depending on the image and what I want to say, I might use Spanish or Chinese. Many of the artists I admire use text in their work, particularly Kara Walker, Tracey Emin, Frida Kahlo, and Lee Lozano.

YOU HAVE SAID PREVIOUSLY THAT YOU ARE OBSESSED WITH PROCESS. WHAT FASCINATES YOU ABOUT THE CRAFT OF PRINTMAKING?

I love creating and working with multiples. For an etching, you draw an image, maybe draw many studies, then etch the image onto a plate, then print and print and print the same image – you see a lot of it. The repetition involved, both of the actions and of the image, appeals to me. Even though there is a lot of labor involved in creating each print, knowing that there are many makes each one feel less precious and more approachable. Each print is slightly unique and then, once you have many of the same image, if you choose, you can alter each one using other media. 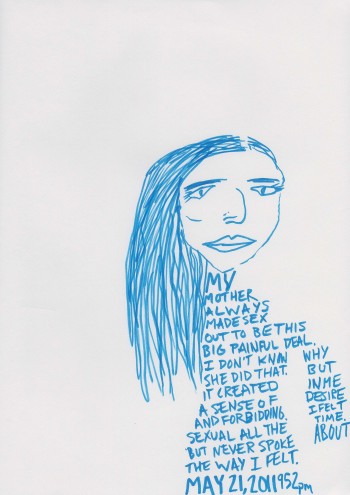 YOU WORK IN MANY DIFFERENT MEDIUMS. IS THERE ONE THAT YOU PREFER MORE THAN THE OTHERS, OR ONE IN PARTICULAR YOU ARE INTERESTED IN AT THE MOMENT?

I always love drawing. That’s not to say I prefer it over any others, but that’s usually where everything else starts. At the moment, I’m really interested in combining many media in a single project.

WHAT ARE YOU WORKING ON NOW?

Right now I’m working on a few new paintings and etchings and starting to work on building an oversized dollhouse. I’m excited about the dollhouse. I first started making a dollhouse almost fifteen years ago, so it’s overdue. It will be fully decorated, furnished, and populated.

I think a lot about Internet technology and what it’s doing to our society, and those topics are becoming increasingly present and dominant in my work. I’m reaching back towards an earlier time, trying to get to something more analog. The dollhouse is part of this theme. For me, in addition to being a lot of fun, it’s about tactility and childhood fantasy and “old fashioned” ways of kids entertaining themselves, and it’s about imagination.

At first it was nerve-wracking, but then I realized I had complete control – that was more fun than I’d expected!