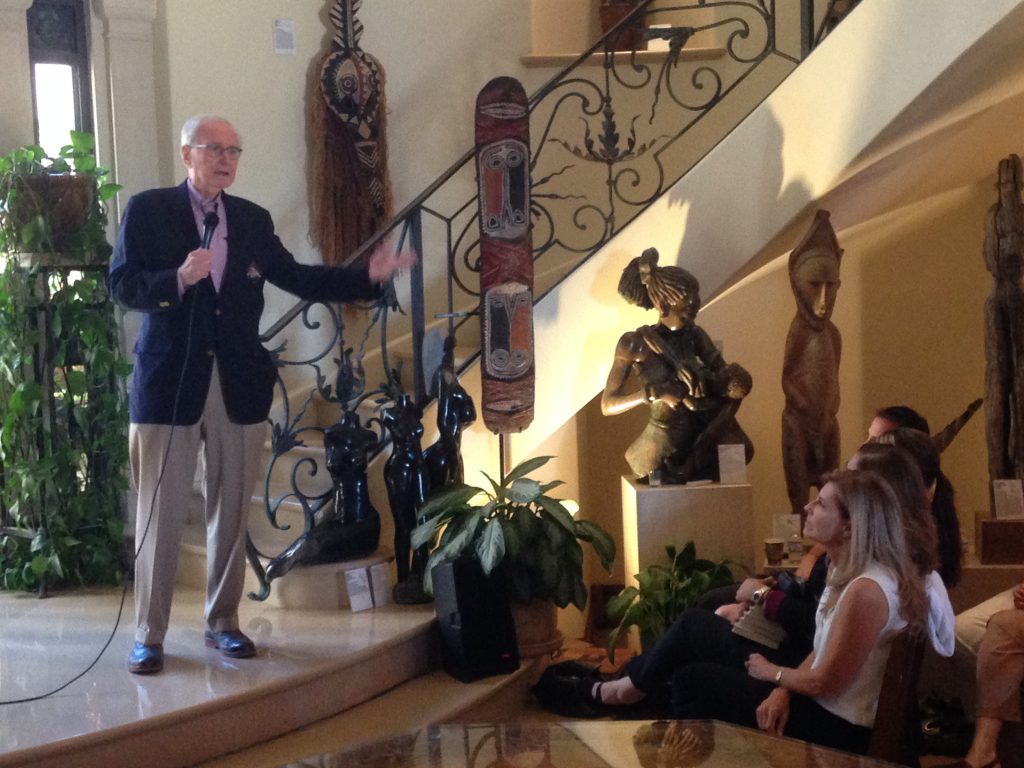 Dick Flavin regales the Red Sox faithful on the game he loves at a recent La Jolla Farms get-together. PHOTO BY CHRIS SHAFFER
It’s always baseball season for Dick Flavin, the poet laureate of the Boston Red Sox, who was in La Jolla Oct. 24 in support of his New York Times bestseller, “Red Sox Rhymes: Verses and Curses,” a collection of baseball-themed poems he has written over of the years.

“When I finally did this thing,” Flavin said, “it was a wake up call to me. I had loved these poems and the lyrical connection. I started writing them, and I loved doing them. I loved the Red Sox all my life. I tell people I was born a Red Sox fan and baptized a Catholic.”

Flavin, a 22-year veteran of Boston television, recited some poems and told more than a few stories about the Red Sox and the game he loves as part of a City Club of San Diego event at Michelle and Bill Lerach’s beautiful La Jolla Farms estate.

The well-attended event was organized by San Diego native George Mitrovich, president of the City Club and the Denver Forum and chair of the Red Sox & Great Fenway Park Writers Series. Mitrovitch invited Red Sox fans young and old to hear Flavin do what he does best — humorously recite his favorite poems as he weaves the history and emotion of the game throughout the words.

The 224-page book is published by HarperCollins.

“When I was in the third grade,” Flavin said at an interview at the La Valencia Hotel before his appearance, “I made a discovery. It was a poem by Ernest Lawrence Thayer called ‘Casey at the Bat.’ I loved the story of it, and it was about baseball. I loved the music of it as the words took you inexorably to the conclusion. I loved hearing and saying it more than reading it. I learned the poem on my own. It became part of my act, and I would recite it for anyone who would listen.”

That iconic poem was the inspiration for the poetry Flavin would write about the Red Sox and baseball for the next 15 years.

Ted Williams, a native of San Diego and in Flavin’s opinion the greatest hitter in the history of baseball, had an important influence on Flavin, as is evident by the number of poems and stories around him. Flavin got to know Williams through his pals on the team – centerfielder Dom DiMaggio, a hero of Flavin’s and to whom the book is dedicated, and player-manager Johnny Pesky.

“I’m taking the road trip of a lifetime,” Flavin begins, “and I’m with Dom DiMaggio and Johnny Pesky. We all drove down to Florida to visit with Ted, who was gravely ill. I had to do something to justify my presence among these mythic heroes of my boyhood. So we’re in Ted’s living room, and I do a rewrite in my head of ‘Casey at the Bat.’ I made it about Ted, and the Red Sox and recited it for the three of them. I knew ‘Casey at the Bat’ cold, so it was easy to do. Ted loved it, and every time he saw me, he asked me to do ‘Teddy at the Bat.’”

Flavin also has a deep admiration for “the man with the vision,” as he refers to Larry Lucchino, former Red Sox CEO and a longtime La Jolla resident. Lucchino, who is mentioned often in the book, led the efforts to restore Fenway Park to more than its original grandeur, modernized it and brought it back to life, giving a great gift to the community of Boston. But Flavin considers Lucchino’s impact on baseball to be far greater than just one park.

“Larry’s great legacy to the game,” he explained, “is what he’s done for ballparks. Baltimore is a perfect example of that. He studied what it was about the older parks that people loved and folded that into Camden Yards. He built a retro modern park that has all the bells and whistles but also the traditional aspect to it as well.

“Larry came to San Diego and built Petco Park, a beautiful facility that would not have been built without Larry. They were all Larry Lucchino’s doing. Those three ballparks and what he has done for the community in those three places, Baltimore, San Diego and Boston, should put him in the Hall of Fame as an executive.”

It was Lucchino who asked Flavin to be the poet laureate of the Red Sox, the only team to have one. Even with the season completed — and long after the Sox were in contention — Flavin is still high on the game he loves and preparing for next season.

“When you love something the way fans love baseball,” he said, “you don’t stop just when your team isn’t winning. Baseball is still being played, and I’m still watching. I’ll be ready for spring training, like all baseball fans. We can’t help ourselves.”