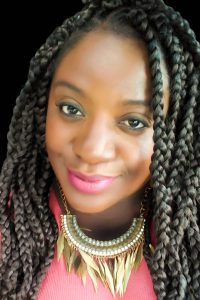 “LIFE IS NOT ABOUT GETTING OUT OF THE RAIN IT’S ABOUT LEARNING HOW TO DANCE IN IT.”

Joane Nelson is an enthusiastic media artist who holds extensive experience of working in the entertainment industry. Born in Haiti and raised in Boston, Ma, Joane always had a strong connection with the entertainment world and the art of music. Motivated and inspired by the drive to rise above struggles and achieve greatness in life, she began her journey as a musical artist. Through the aid of her love and admiration for the art of music, she was able to transition her passion into a profession. She learned the traits of life and attributes of self-respect from her parents whose words of wisdom helped her sail through the troubled times of life.

Joane began her professional career as a media artist from a highly esteemed media team called V-neck Media, an experience which further enhanced her love for media and the art of music. In her tenure with V-neck Media, she worked on projects for several different companies such as Izotope, Wework, and Altaeros energy. Following this, Joane began working with JMagas Productions and served as a creative consultant for the music brand and worked on songwriting, licensing, and music placement. Joane acquired the credential experience of working as a songwriter & composer and co-produced several music videos from the creative concept. In the meanwhile, Joane also worked as a freelance producer and had the pleasure of working along with several organizations and companies in order to assist them in pursuit of achieving a creative and logical standpoint. In the year 2014, Joane began working as a freelance event planner and provide event promotion services for wide range of events from fashion events, club events, music events, etc.

In August 2017, Joane married the love of her life Sebastien Nelson with whom she embarked on a newer musical journey. Joane and Sebastien moved to California in quest of pursuing a career as a media artist on the west coast. Through the aid of her extensive knowledge and understanding of music, she quickly began influencing renowned names of the media industry. Joane connected with Terri Stanley – The President, Executive Ambassador Board of the San Diego International Film Festival, and the Executive Producer of the Emmy Award Winning show Style Boston. She is currently working alongside Terri Stanley on her new venture called “LeftCoast.LA”.

Joane had risen above doubts & fears to accomplish success & greatness in her career as an artist. She is always on the lookout for an opportunity to explore her musical talents and believe that real success is the one acquired through hard work. As a media artist, Joane’s aim is to use her experience and skills to assist production houses to acquire greater exposure and succeed in their pursuit of professional career success