Good old holiday joy is once again back in Boston. Setting off the merriest of seasons is Macy’s with their annual lighting of their Christmas tree, with a small ceremony to celebrate their iconic tree above Washington Street in Downtown Crossing.

Traditionally, the lighting of the tree would happen on ground level and the lighting would be a more publicized event. But Covid-19 and social distancing, the event was a deliberately low-key event. There were a few “civilian” onlookers and a fenced off area mid-street for the gathered members of the press to have ideal space to record and take photographs.

From the balcony overhead, store manager Jennifer Dietzway, stood beside Boston’s Mayor Marty Walsh, the young siblings Aiesha and Richardson from the Make-A-Wish Foundation, and a staff member holding a stack of Golden wrapped presents.

The store manager gave an impassioned and heartfelt speech to the dispersed viewers and media coverage on the ground, thanking those attending and supporting Macy’s and other Boston businesses. Mayor Walsh gave a brief statement of gratitude and encouragement to Boston citizens and workers for their continued fortitude in this unconventional year.

Dietzway continued on, speaking on the details of Macy’s Believe program, a charitable effort and collaboration with the Make-A-Wish Foundation to help those in need. For every letter sent digitally or dropped in the red letterbox within the store, Macy’s will donate a dollar to Make-A-Wish. The Believe project has been in place since 2008, bringing much needed aid and care to those who need it most.

Aiesha and Richardon both dropped their letters to Santa Claus inside the red mailbox, eliciting applause from those below. There was an air of hope and solemn nostalgia in the chilled autumn air at seeing two young children place their envelopes into the slot. A moment for everyone watching to reminisce on times they were in these children’s shoes, when we all carried such innocence and earnest belief in an endearing and beloved folktale.

Dietzway continued on as they prepared for the countdown to light the tree, “We’re going to ask that everyone yell the word ‘believe’ because we need that word more than ever this year.” The countdown was swift, but the city street energized, then burst with energy as people shouted “believe!” in unison as the tree ignited with yellow-cranberry light. Onlookers cheered as the staff member gave the presents to the young children. Everyone’s smiles may have stayed hidden beneath the masks, but the happiness was palpable to and real as any other year. 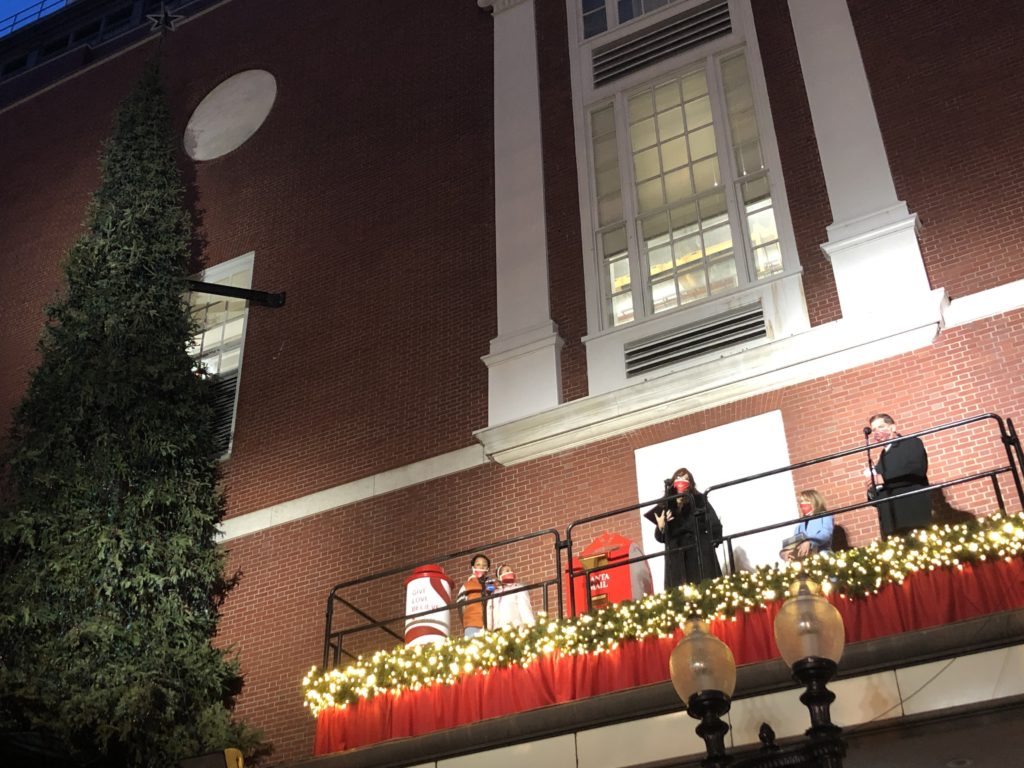 Macy’s annual tree lighting in Downtown Crossing made a few modifications to allow the celebration to go on during Covid-19. So that’s Mayor Walsh up there on the balcony with a small group from Macy’s and the community. Photos by Thomas Brennan 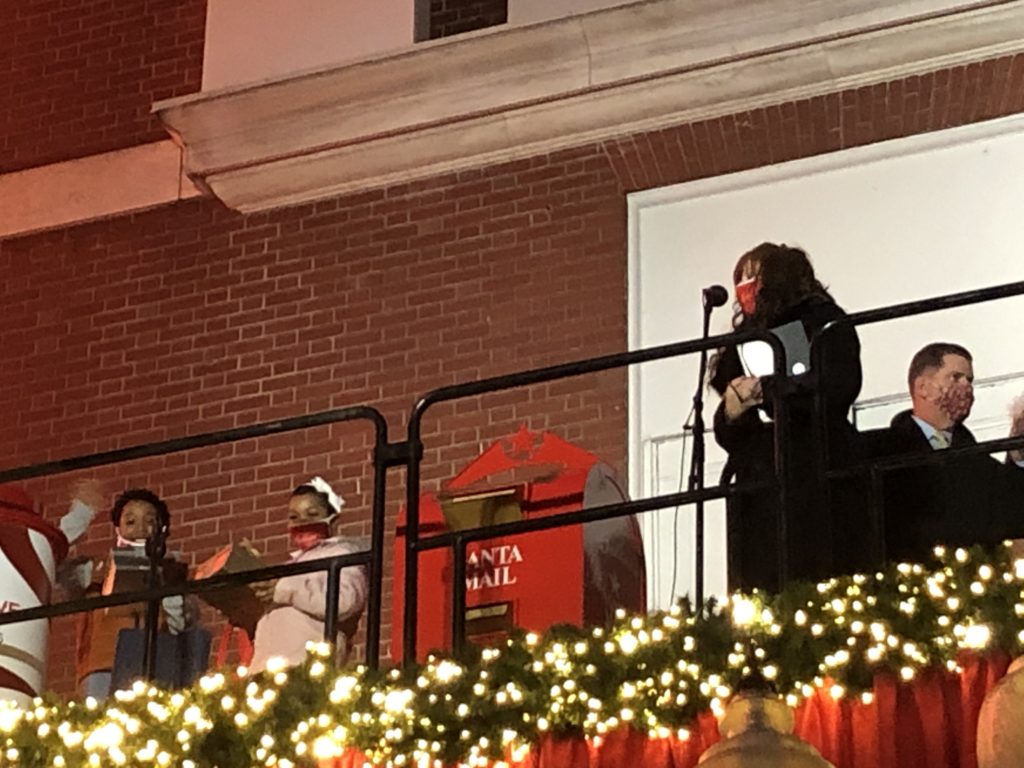 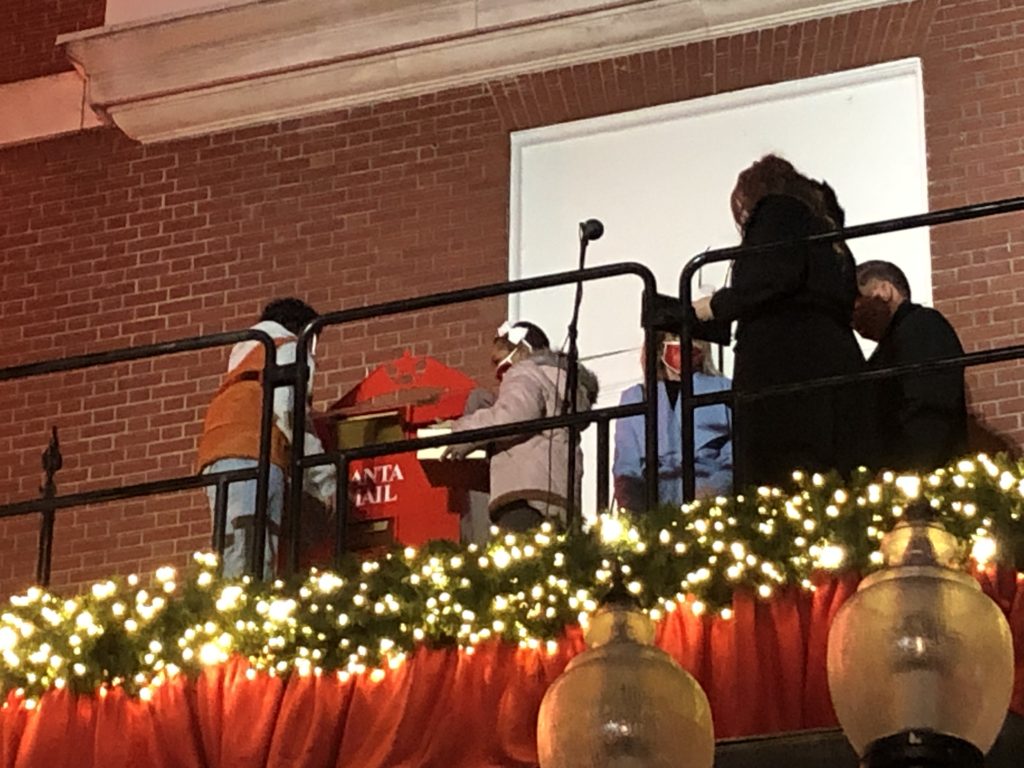 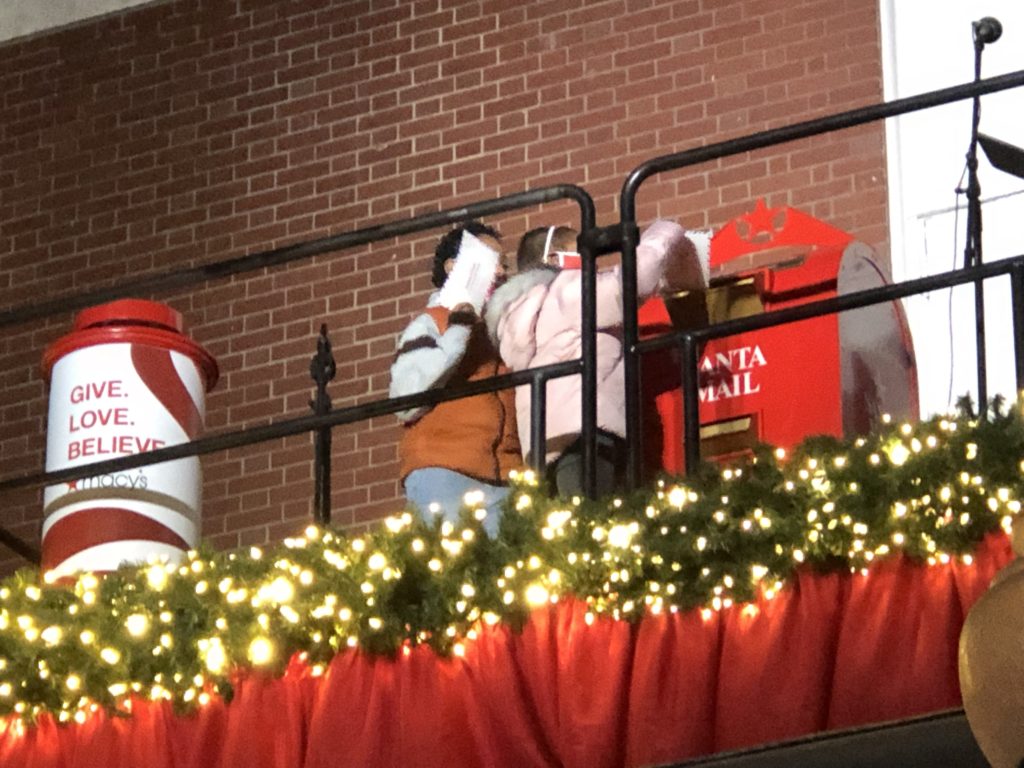