I’d tell them it was actually my first job having graduated from college. 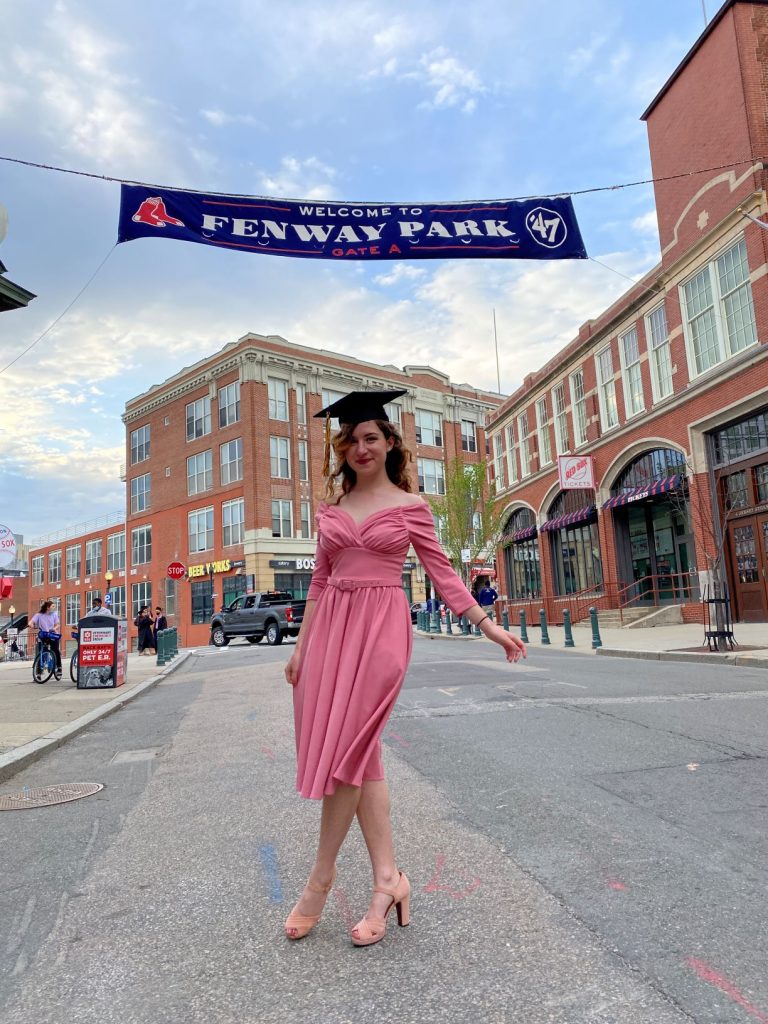 Let’s be totally honest, all acting students train to work their craft and expect to toil for a long time waiting for that big break. For recent Emerson College graduate, Emma McGill, things happened pretty quickly as the acting student landed a role in the inaugural season of CBS’s “The Equalizer,” her third appearance in a network TV show. Her first was working with multihyphenate performer, Queen Latifah, the show’s star.

McGill is still putting in that hard work, however, as the Brooklyn native has returned to Boston to work in a touring theatrical production this Summer, while juggling work to pay her rent. In other words, a typical actor’s life is emerging for this aspiring actor.

McGill is a member of Emerson’s Class of 2020, which had to wait until early May 2021 to actually receive their diplomas and participate in a graduation ceremony. (Emerson hosted the 140th and the 141st commencement ceremonies at Fenway Park to accommodate some supporters for each graduate.)

Like so many others, McGill had to adjust from in-person classes and training, something many performers took for granted, to remote learning as the state of Massachusetts shuttered colleges and universities in the Spring of 2020. And, like so many professional actors, McGill had to adjust to auditioning for jobs remotely as well, losing the feedback and sense of community that many people just starting out find so helpful – albeit nerve-wracking.

McGill talked about some of the impediments to the auditioning and casting process because of pandemic precautions that she faced before she got her role. “There’s not a lot of in-person auditions taking place right now,” McGill said, which is still true even as the Summer means more things are opening up. 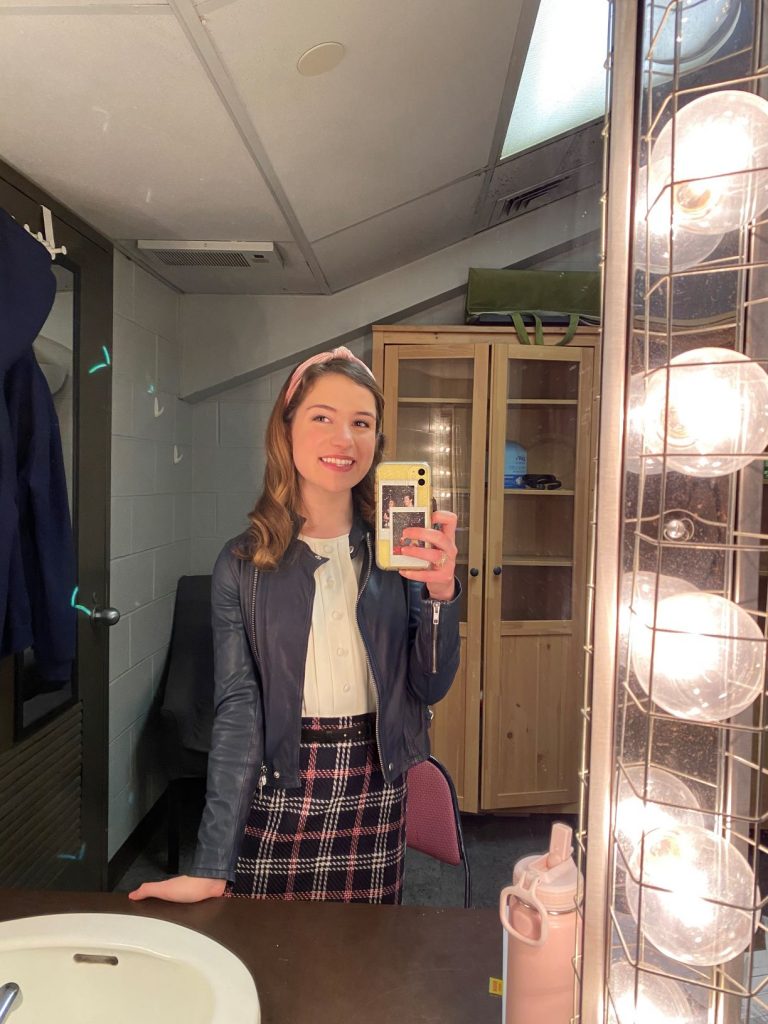 “Everything [in casting] has been moved to self-tape. I had my initial audition, then I got some notes back through my agent. I did the self-tape again, then got an email from my agent to wait on hold for a couple of days for the studio to approve me for the part,” she said.

The drawn-out process wasn’t the heaviest thing that weighed on McGill’s mind through the whole endeavor. “It was definitely difficult not being able to audition in the room. Sometimes you’ll go in for an audition and say ‘That was great, go again but do this.’ It makes this whole process a lot longer as there’s no immediate feedback. It’s a little bit isolating, not being in the same room with people you’re auditioning with and not knowing how you’re being perceived feels like you’re in this void.”

McGill said that she still found an upside in this modified auditioning process. “It’s a little bit of a blessing and a curse you can take as much time and as many takes as you want that you wouldn’t get in the room. I’d much rather be in the room, but I learned a whole lot about myself as an actor from having to watch myself audition and act during this time.”

After the successful audition McGill was set to arrive on the studio lot for The Equalizer set. “There’s always a sense of urgency to stay on schedule, to get the work done,” she said. “And then there was an added layer on that to try to keep everyone healthy.”

Those health and safety concerns were front of mind for all cast and crew, McGill said. “It added a little bit of pressure, but at the same time there was a feeling of trying to keep everything as upbeat and normal as possible.”

The specifics of pandemic precautions being taken on the studio set were particularly intriguing beyond normal gossipy behind-the-scenes secrets of television. “I had to get tested…prior to filming. Monday for testing then Wednesday for a fitting, then I got a rapid test the day I showed up on set.” 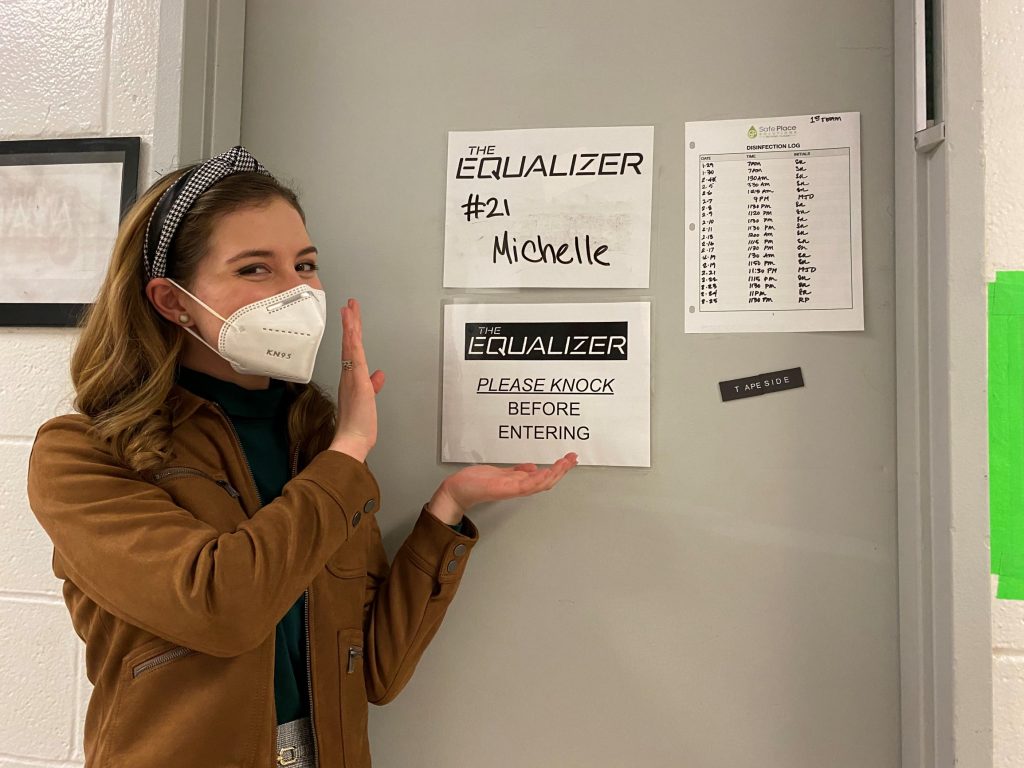 Even once she was there, McGill had to follow a rigid schedule. “On set, it’s a little wild. I had my own dressing room, when I needed to be in hair and makeup or anything like that I’d put on a mask, go wherever it needed to be done, then go straight back to my dressing room,” McGill said. “If I needed food or coffee a [Production Assistant] would have to go get that for me.”

McGill’s said that despite the concerns, everyone pulled together and worked to keep the production rolling and everyone healthy. “Everyone [wore] a mask. Then they say ‘rolling’ and everyone will take their marks off and hide it in a pocket or a covid safety PA would come over, put it in a plastic bag and store it offset. We’d shoot the scene, then they’d say:

“Cut! Masks on.’ And everyone would rush to put their masks back on.”

Despite the pandemic changes, it was still very much a TV production, complete with rehearsal and script changes on the fly. “I did notice between the table read and the production that there were scenes that were supposed to take place at a crowded campaign rally that got moved into a campaign office because it’s harder to film a crowd scene [then].”

When asked about her first scene in which she acts as a worker at a campaign office in orbit of Liza Lapira’s character, Melody, McGill said: “There was supposed to be a scene of [Lapira] and me, but it just got cut for completely normal, non-Covid, film production related reasons.”

We at styleboston would be remiss to not have asked McGill if she had time to meet the “Equalizer” herself, Queen Latifah. “That was so exciting. She was lovely and super fun. She comes onto set and her presence is just incredibly commanding. Everyone on set calls her ‘The Queen’.”

Apparently, the Oscar-nominated star is not all business on set, still finding time to have some fun while filming, “In the scene where the guy pulls out the gun they did a closeup of the hand and the gun, being all dramatic and serious. She’s just standing to the side, watching them film and she says under her breath ‘You have a lot to equalize’.”

While the scene McGill describes is one of the most tense of the episode, it’s rather intriguing to know the production vibe at that time was in stark contrast to what aired, with hearty laughs from those hearing the star’s joke.

In the end, filming for The Equalizer was an incredible positive experience for McGill. “People were very nice, making small talk between takes, asking if this was my first job, and I’d tell them it was actually my first job having graduated from college. Everyone was very happy for me.”