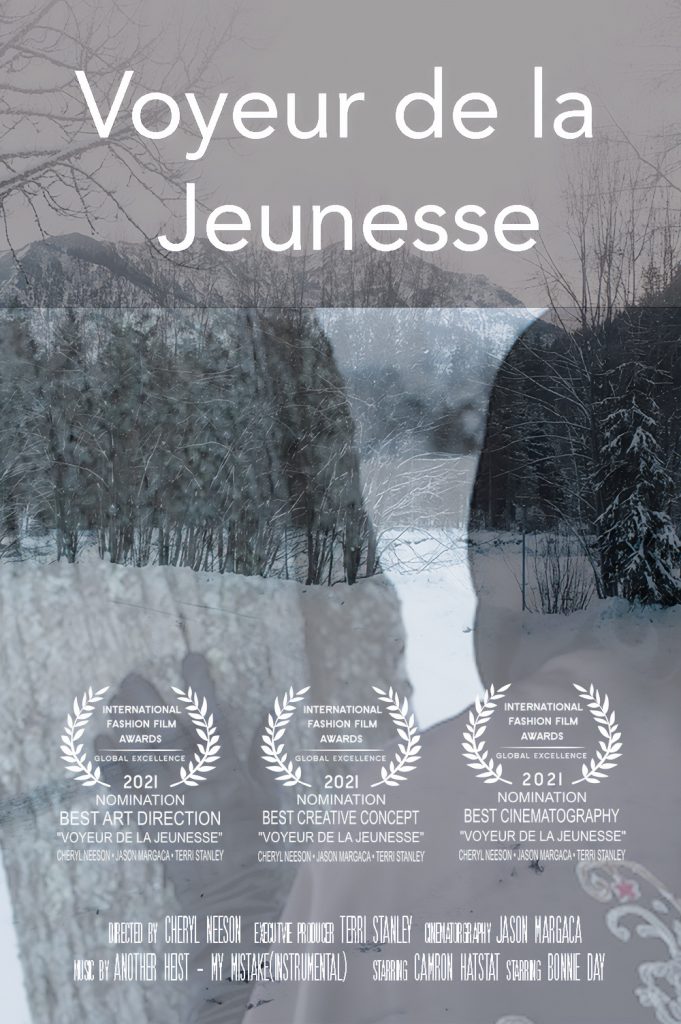 (Editor’s Note: styleboston creator Terri Stanley is the executive producer of a short film Voyeur de la Jeunesse, which was directed by creative director Cheryl Neeson. The film, which is just over four minutes long tells the story of “an older woman, who feels invisible,  longs for her youth only to realize it will always be part of who she is now. She’s never lost it.” Filmed entirely on location in the Boston area by V-Neck Media, which also produced the film’s original score. The film will premiere at the 12th annual La Jolla International Fashion Film Festival. What follows is one of the film’s featured performers, Camryn Hatstat’s first-person view of making the film.)

I was months away from graduating college and figuring out what I wanted to do with my life when I was asked to work on a short fashion film alongside the publisher and creator of the styleboston website, executive producer Terri Stanley. What an astonishing question! I was thrilled to be wanted for such an intriguing project. Being one of the leads in a film was something that I had never experienced

After working on styleboston for Terri, I was excited to jump at this new adventure. She had emailed me and asked for headshots, which I had because I had been in the modeling industry for quite some time prior to starting my internship at sb. S0, I sent her over some of my previous works from a photographer that I had been working with for years.

I had no idea what to expect. All I knew was that I would be working alongside two of the most talented and innovative women in the media industry. I sat in on a conference call with Terri and the creative director, Cheryl Neeson, as well as the cinematographer Jason Margaca of V-Neck Media. Cheryl was responsible for the conceptual approach to the film and explained the film’s  story line to me. Cheryl talked about how the wardrobe was an important part of the concept, integral to it, a main character in the film. I remember my jaw dropped throughout the call because I was truly astonished at just how smart and driven these people were, and that they had chosen me to be one of the main characters in their film. We set up the date and location of where we’d be meeting to start filming after they had given me all of the proper direction to be prepared

Trying on the beautiful kimono, along with the lavish jewelry, and other accessories that
complemented the two leads (Bonnie Day & me, Camryn Hatstat!) in the film, I felt as though I
was turning into the true character. I was no longer Camryn Hatstat, I was now a girl enjoying
and cherishing my youth, seeing the world in black and white, with little to no clue what the rest
of my life would bring to me. Then Bonnie as the older woman, who gracefully remembers her
youth and wishes to go back and relive it.

Practicing walking through the snow was fun and rather interesting. Walking in such a way that
represented both beauty and youth in knee deep snow was challenging. Using the set, as well
as having both the producer (Terri Stanley) and creative director (Cheryl Neeson) by my side
throughout the entirety of filming, was magical and enchanting.
They were extremely helpful when it came to visualizing the film, and truly getting
into the main character

Our first shoot was at one of the oldest, private golf clubs in New England, Plymouth Country Club, where there had been a snowstorm the day prior to meeting. This was perfect for shooting. The field in which we were filming on clearly hadn’t been touched, virgin snow (!) that was also ideal. Everything about the set up was perfect, and everyone was extremely motivated to make this a quick but beneficial filming day, considering how cold and snowy it was outside.

I was then introduced to the beautiful clothing I would be wearing-as Cheryl had explained the wardrobe was very much part of the concept. The clothing represented both beauty and youth and shedding the clothing as I walked through the snow was symbolic of reversing the stigma of age. The actress Bonnie Day, who plays the the older version of me, was amazing to work with and she and I were going to be wearing the same clothing, which made the entire storyline truly come to life. They explained that this film is about empowering women of a certain age, that they are not invisible and irrelevant. 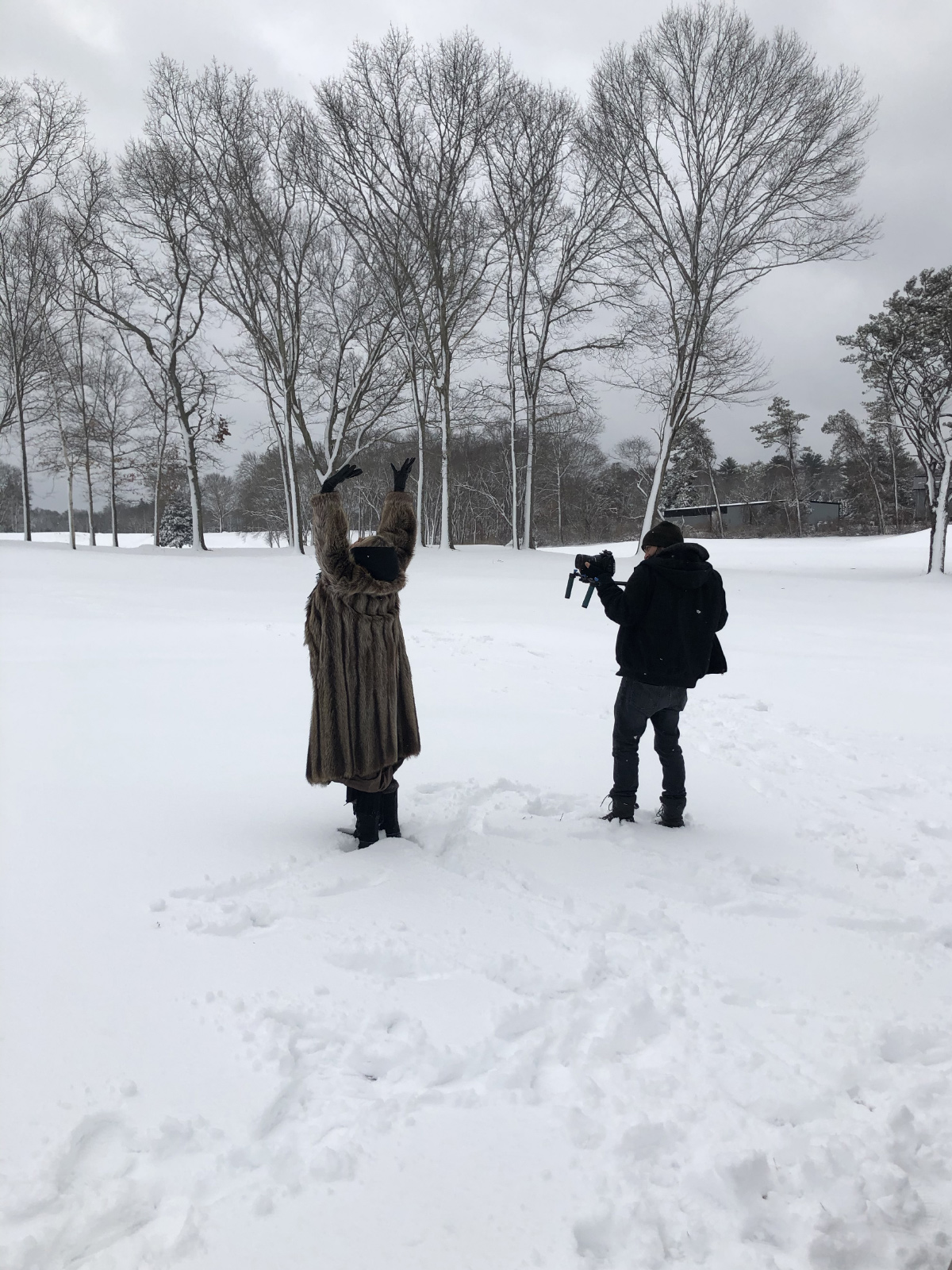 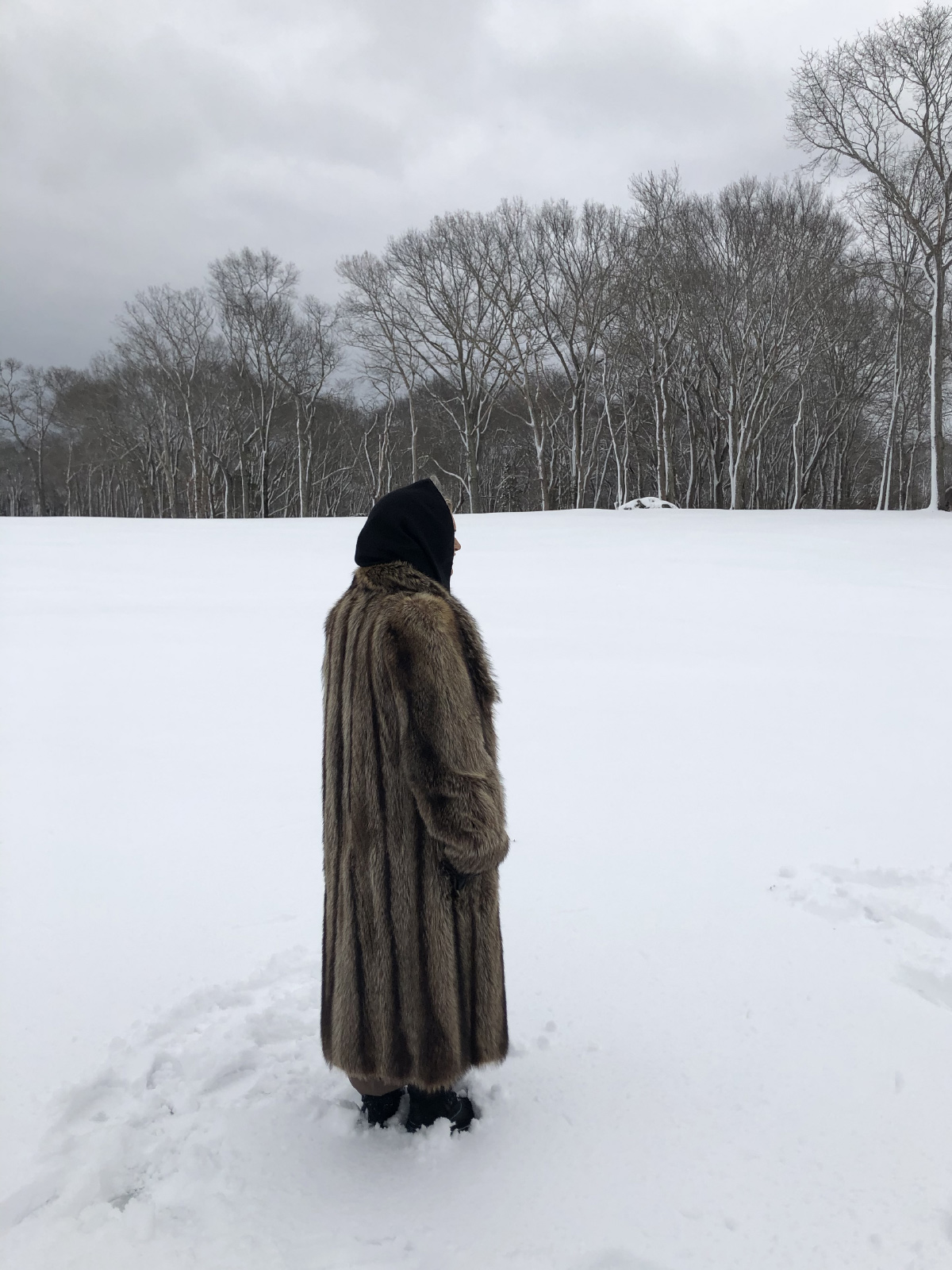 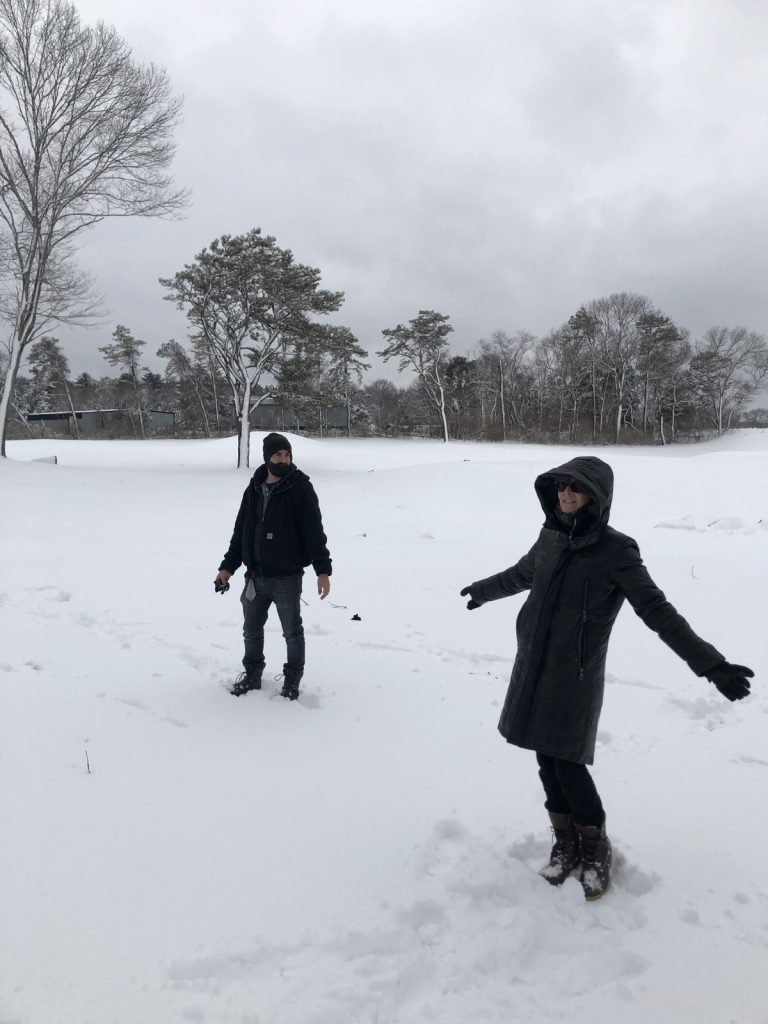 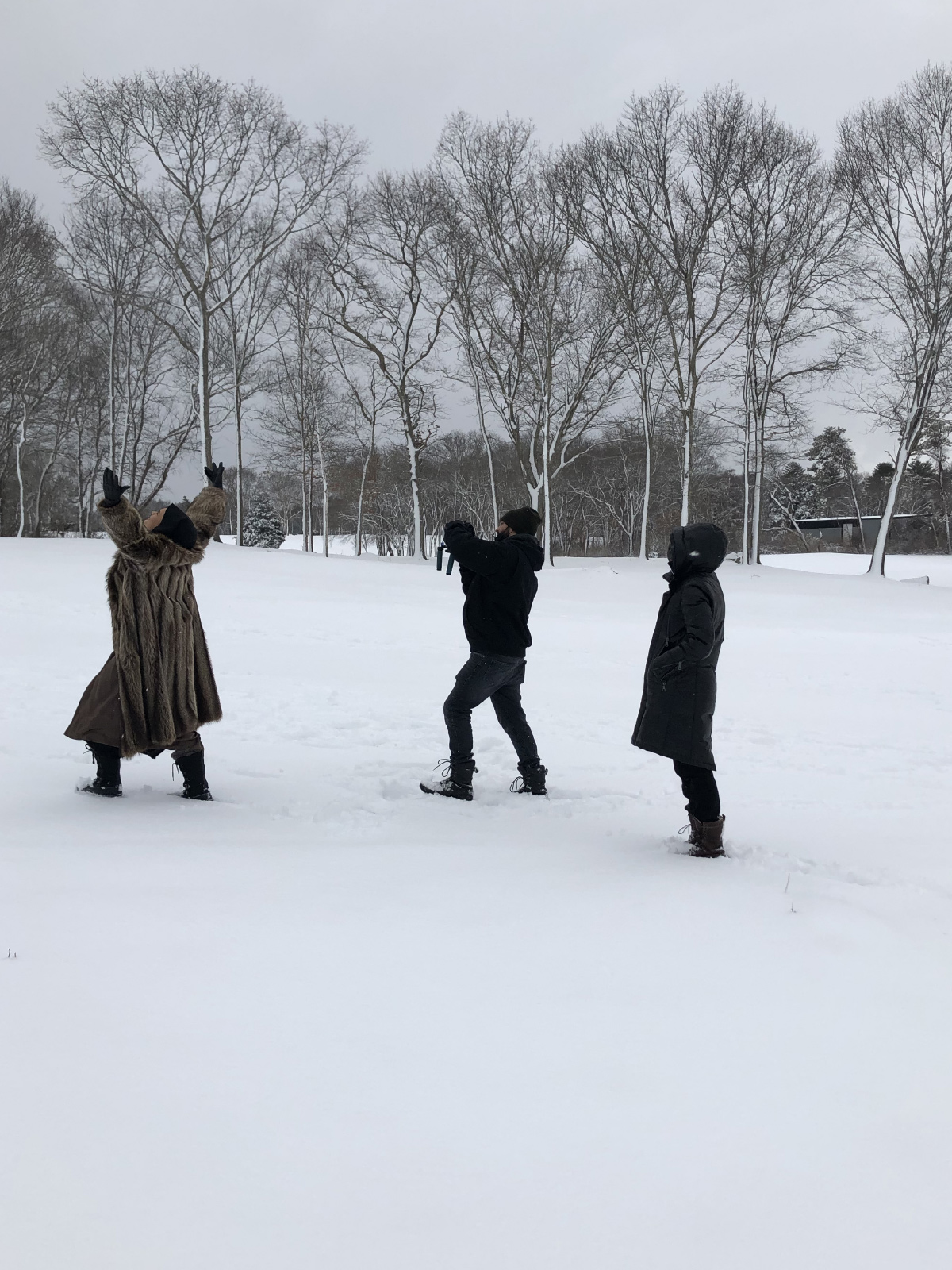 Rehearsing the snow walk with Jason and Cheryl

Never in a million years did I think I was ever going to be featured in a film that takes place in
the snow. Never in a million years did I think I’d be lying in the snow with a bare back. It was an
experience I will never forget. Walking through the snow and shedding layers of clothing
that represented getting old and being youthful was enchanting and giddy. I felt as though I was
expressing feelings that both the older woman and the younger woman felt. Feelings that I am
still unable to put into words a few months later. Working with Terri, Cheryl, and the
cinematographer/editor Jason Magarca, was a once in a lifetime opportunity, and I very much
hope to work with them again.

The most magical feeling was gliding through the snow and falling back on to it, making a snow angel. I truly felt most connected with the character in this very moment.

Working at the second and final destination in April on historic Newbury Street in Boston, was yet another once in a lifetime experience. The set was at the Childs Gallery, located at 168 Newbury, where beautiful pieces of art are sold for thousands of dollars. Filming at such a cool place along iconic Newbury Street in this beautiful city was once again an enchanting and professional experience.

I would like to thank Terri and Cheryl for allowing me to learn and work with them, as well as Jason. The set crew was like family to me, which says a lot considering we only filmed for two days and two months apart.

This is a short film that no one wants to miss. Please tune into the La Jolla International Fashion Film Festival on July 24. Just download the SimulTV app from Play Store or Apple Store to watch and see if we win! For more information on the fashion film festival, click here.