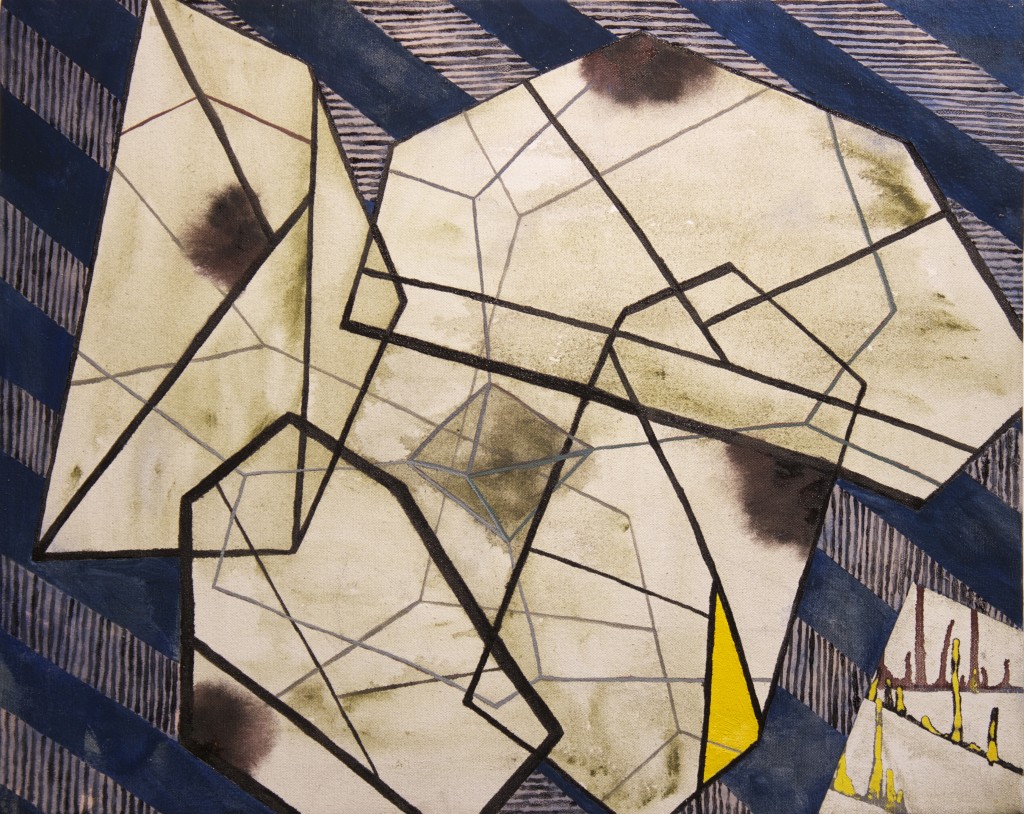 At 23, Phaedra Brucato is one precocious artist-in-training.  She’s made a home, if a temporary one, at the School of Museum of Fine Arts, and in the Q&A that follows Brucato not only elucidates her love of abstractionism, but also opens up about being a West Coast transplant, her Catholic school upbringing, the myriad stresses of finishing her graduate exhibition (currently showing at the SMFA), and her post-graduation plans to get the hell out of dodge. Or, in this case, Boston…

CHRISTINA KIM: It’s an insipid, but necessary, question: what inspired your senior collection?
PHAEDRA BRUCATO: I am fascinated by [Yale Professor] David Joselit’s idea of ‘transitive painting’, which can be defined as ‘an action being expressed by being passed over to an object’.  I prefer to understand my paintings as a form of thinking in material, which holds similarities to the work of many fashion designers, interestingly enough!  Inspirations for me are vast and varied, ranging from black metal, experimental, to noise music. I love more avante-garde fashion designers, such as: Proenza Schouler, Gareth Pugh, Rick Owens, Ann Demeulemeester, and Jil Sander. Really, anyone who expresses ideas of abstract painting in a daring, yet more tangible way. I am also inspired by many contemporary painters, especially Charline Von Heyl, Jacqueline Humphries, Cheryl Donegan, Katherina Grosse…The list goes on.  Last but not least, I am interested in the vast and very abstract world of the internet, and the incomprehensibility of this space.

KIM: How did you get a start in art, and in painting? What was the evolutionary process like?
BRUCATO: (laughs) Well, one thing for sure, I could get really holed up in my own world and space, and be so fully immersed in all kinds of abstract and illusionistic concepts.  Growing up though, I had gone off to a very small, college-prep, Catholic high school, where the overall environment was much more narrow and specific in their focus and push towards the academia.  I started off my studies at Tufts University.  Lucky for me, came across the SMFA program through the two schools’ joint degree consortium.  Initially coming from such a strictly academic setting, I didn’t have the opportunity to pursue my interest in the arts, including painting.  Then I got a chance to take a class called ‘Abstraction Configuration Criticality’, which opened up a whole new world for me.

KIM: That must have been such liberating time for you to have had that “ah-ha!” moment!
BRUCATO: It was! It was definitely a pivotal opportunity in my being able to breaking out of the shell, and testing out the waters.

KIM: Your work consists of very strong, impactful pieces that have an almost stark delineation of colors and overlapping brushstrokes.  The work feels abrasive, almost aggressive, really, but upon closer inspection, reveals subtle, more organic relationships between the forms you create. At the risk of sounding a rube, I won’t admit how much time I lingered over them…
BRUCATO: That was certainly the intent!  What’s most intriguing though, is that once these pieces sink in, you notice that there is just as much blurriness and not-so-clearly-square-cut space within the paintings.

KIM: Why abstract?
BRUCATO: This was a way for me to make sense of the world [around me].  For example, the works included as part of this exhibition is an illustration of my processing all the information I am receiving, reciprocating, and commuicating with my surroundings.

KIM: Your way of processing, as in, regurgitating then spitting out the more understandable, edited, tangible version of how you see the world in times of total, utter information overload in the Internet Age and the irreversible phenomenon of social media?
BRUCATO: Exactly!  And in that frame of mindset, you also come to see all the ‘interconnectedness’. Even within the most immediate and provincial context of my own experience as an artist, many people tend to easily assume and write off the arts versus and the academia as being at two opposite ends of the spectrum. Oftentimes, they are pereived as two dichotomies that don’t often collide.  But I think I operate in very methodical manner in the creative and the production processes I go through as a painter, as much as I would have, in solving complicated, challenging mathematical equations.

KIM: Speaking of dichotomies, I understand that you are fluent in Chinese and have had an amazing chance to live abroad for four months! Did that experience – of venturing out to the unfamiliar cultural setting – affect the style and philosophies that come out in your painting?
BRUCATO: I loved living in China!  As much as I have such deep appreciation and respect of the depth, richness and the history of the Chinese arts, culture and influences, it still remains to be an ongoing process for me, where I feel that the core aesthetics and styles of my work are quite different, and is still in the growing, transformative stage.  I would love to work as a liason between cosmopolitan cities, like New York City, and Shanghai to bridge and expose various facets of the very different art worlds to peoples.

KIM: Which leads me to ask you, what’s in store for you in the near future?
BRUCATO: Painting, making music and movies, making m-o-n-e-y! (laughs). A girl’s got to pay her rent!  First and foremost, I am planning on moving to NYC, hopefully gain a level of legitimacy in my name, and establish my career as a serious artist. NYC is a brutally competitive place to be at, though there is no place like it in being such inspiring and supportive incubator with incredibly rich mesh of culture and resources to draw from.  Hopefully, there are some fun and off-the-hook collaborative projects with fellow artists in store!  A lot of successful and brilliant collaborations come from serendipitous moments, which is always an exciting thing to look forward to! The way I see it, it’s much more about catering towards the collaborative works, where, through its collective nature, especially in light of the massive influence, impact, and power social media has on many of us, we, as artists can create much bigger ripple effect and have a bigger voice in the world.