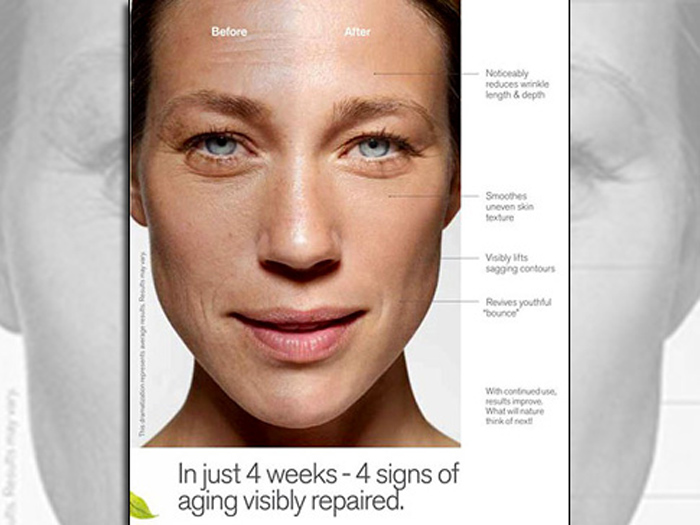 The left side of this composite image was used, in plain terms, illegally. Little surprise then that she is suing the beauty behemoth for its advertising campaign which a) incorporates an image from a test shoot, b) claims the model used a product and achieved the results (where it should have stated that the model never used the product but Estée Lauder has a healthy budget for photo retouching…), and c) states that the demographic of this supposed study was actually much older than the model herself.

Were my looks my income-earning asset (thank God this isn’t the case or a pauper I’d be, indeed) I would undoubtedly sue as well, if only to expose the ridiculousness of the campaign itself (oh, and to save face… literally).

But the question remains: though advertising is widely recognized as a machine of deftly-maneuvered euphemisms and platitudes, shouldn’t some form of fundamental oversight exist for products of this nature?

Dear advertisers: by all means, sell the fantasy. After all, it’s your bread, your butter, the butter dish, hell, it’s the damn dinner plate for you guys. Just understand that in the internet age, we consumers recognize the subtle difference between fantasy and forgery.