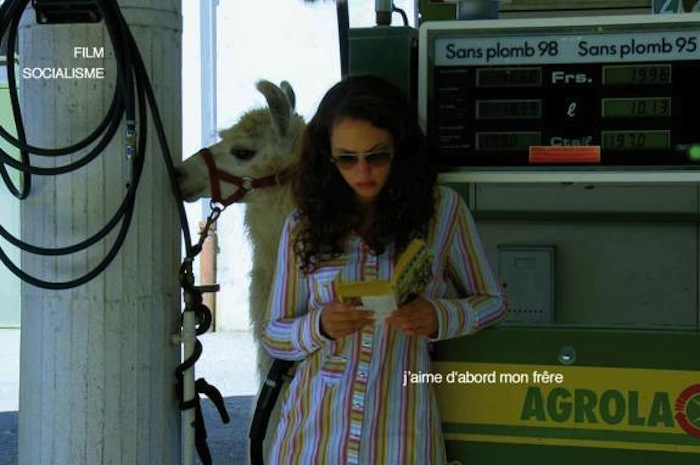 Jean-Luc Godard is known as one of the greatest filmmakers of the 20th century.  And while everyone seems to know his name, no one has actually seen his movies.

Perhaps this is just a profoundly subjective understanding of the situation, since until this past Friday I belonged to that base caste of un-Godard-acquainted untouchables.  Not that my experience watching his latest film – Socialism (en français: Film Socialisme) – revealed much beyond how little I understood of  Godard’s lifelong intellectual operation to critique cinema and expose its artifice.

Where the film did succeed was in creating an phenomenological masterpiece that rejects any attachment to linear narrative or clear language; instead subsuming ideas and aesthetics in a gorgeous and challenging layer-cake that my brain struggled furtively to consume.

Visually and sonically, Socialism catapults us into a dream, and Godard’s use of jump cuts and frenetic editing rendered a dislocated and splintered experience that evoked a sublime feeling of deja vu. By subtitling the film in “Navajo English,” (a cryptic selection of nouns and a few verbs from the primarily French and German dialogue) Godard gave an opaque glimpse into what was actually said.  Yet a breakdown of understanding is what drives this movie, and it wouldn’t have resonated the same for me in the absence of that mental struggle.

The film moves loosely through three parts, featuring a gaudy and iniquitous cruise through the Mediterranean Sea, a Llama tethered to the fuel pumps at a gas station, breathtaking shots of the sea, a 20 year old who voraciously reads Balzac and her pre-adolescent socialist brother, Alain Badiou lecturing to an empty auditorium, even Godard’s own witty tribute to memes, a laptop screen with two very animated and vocal cats playing on repeat.  In watching Socialism, one is accosted by images and questions, the prevailing feelings evoked being destruction, erasure, and transgression.

As my friend said leaving the theater, “How could something that makes so little sense be so profoundly sad?” To the movie critic who decided this piece was an injustice to the Nouvelle Vague movement; that JLG had gone off the deep end, I beg you to reconsider.  The plangent tone of the film resonated with potency, and as the gunshots and blown out sounds left our senses with Godard’s final statement: NO COMMENT, we felt the empty nature of the blank screen and wished it enviously away.

Do not bother to contact me this coming week. I’ll be busy streaming his oeuvre via Netflix.