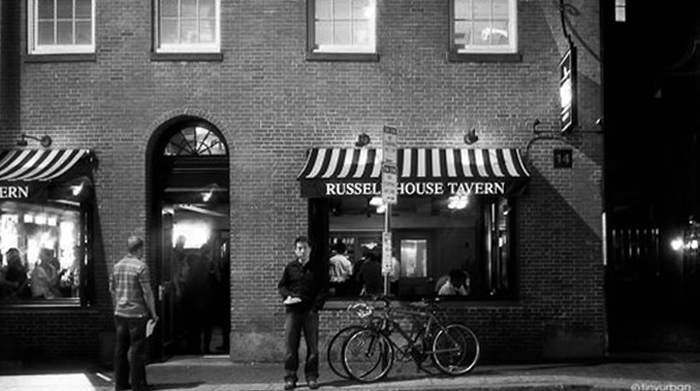 We aren’t halfway through our (spectacular) lobster-brioche sliders at Russell House Tavern when we realize we’ve been lied to. As G.M. Ian Grossman sets down a slab of wood set with morsels beautiful enough to warrant of a national food rag cover, we dive immediately in, and it’s achingly obvious: Russell House is no “Tavern.” Hell, with charcuterie this delicate and meticulous, it barely even qualifies as a gastropub–even the new brand of relatively elevated gastropub. No, there’s full-on, serious, take-no-prisoners kitchen wizardry afoot here: We’re talking smoked, diced lamb belly with velvety harissa and marcona almonds on garlicky grilled bread. Bluefish pate like I haven’t tasted since stepping off a schooner on Nantucket. And the kicker? A glistening terrine of foie gras zapped with Laphroig, then scattered with smoked almonds, black pepper syrup, and subtly tart cherry gelee. It’s got to be one of the most gorgeously balanced foie renditions I’ve wolfed downed in years.

I’m a little partial, of course, to that last dish. Anything that good, which also takes one of my favorite single malts as a key flavor note, only makes me shudder with pure jealousy.  The cookbook I’m currently writing, “The Drunkard’s Cookbook: Tasty Booze-based Recipes and Other Excuses to Drink in the Kitchen” could damn well use an entry that genius. And I just wish I’d come up with it. Never mind that exec chef Michael Scelfo’s skill wouldn’t be out of place at a fine dining spot; RHT’s ultra-chill atmosphere (especially this time of year, on the sun-speckled patio), its chatty and funny servers, and the dining crowd’s swirl of joviality–they all conspire to camouflage just how ambitious the food actually is.

That’s because, whether we’ve got the recession to primarily thank (probably), the public’s exhaustion with stiff, pretentious restaurants (just as probably), or the fresh-off-the-farm craze (definitely), RHT is the latest and most extreme example of nigh-fine dining recontextualized in order to put diners at ease enough (mentally and financially) to make regulars out of them. Ten years ago we were stacking imported status ingredients on a bone-china plate next to candlelight and damask-covered banquettes, and hoping diners didn’t mind overpaying for it on special occasions or date nights. Now we’re luring diners back once or twice a week with lower prices (which means they’re still spending about as much as they were before, ultimately) and easygoing atmospheres, and food that seems unfussy but has, in fact, a stupendous epicurean soul. Because no matter what else has changed in our collective unconscious, now that we’ve all had a taste of incredible food over the last decade, there ain’t no going back. No matter how it’s dressed up. Or in this case, down.

Speaking of which, I’m getting Scelfo’s foie recipe if it kills me. Just watch.