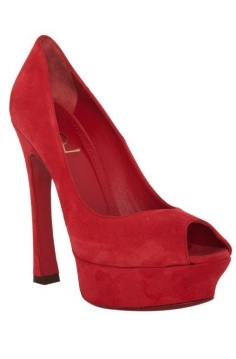 Like love at first sight, when you see it, you know it. Heck, even your unfashionable, khaki wearing, straight boyfriend who annoyingly wears athletic socks with loafers (God love him) knows it. They’re as identifiable as the crisscrossing double C’s of Chanel or the golden arches of McDonald’s. I’m talking about associating lacquered red high heel soles with French shoe guru Christian Louboutin. And I’m talking candy apple red. Not orange red or pink-red. Red-red.

It is as Christian Louboutin’s lawyer, Harvey Lewin, bluntly told WWD last week, “Unless you’ve been living in a cave,” you most definitely associate that red-red sole with Louboutin. It’s as iconic a brandmark as any logo could ever hope to be.

And that’s precisely the issue Monsieur Louboutin contends in his recent suit against another established French fashion house, Yves Saint Laurent. With specific respect to a pair of sky-high, candy-apple-red suede ‘Palais 105’ platform pumps with leather soles. The issue? The soles match the suede, my friends. Monsieur Louboutin wasn’t pleased about about YSL squatting on his corner of the color wheel.

YSL responded to the claim by stating it unfair for a brand, any brand, to monopolize a color.

Fair enough. But it seems beneath Yves Saint Laurent–the house of  Le Smoking legend, and the savoire faire to turn safari fatigue into safari-chic–to pull such a stunt. Surely, the designers knew such an accusation would ensue. More to the point: why would YSL send to market a design that essentially, if inadvertently, advertises a completely different brand, when it can simply develop it’s own new signature sole color?

I don’t know the answer, frankly, but I would like to officially stake my own monopoly on fuchsia. One, I look fantastic in this shade of pink, and two, 95-percent of my wardrobe is already this shade, for the aforementioned reason. This probably doesn’t work for all of you lovely readers. I’m sorry I’m not sorry about that.

A little advice to the lot of you, and, apparently to YSL: get your own signature color.

1 thought on “THE PRESS-ON NAILS COME OFF: LOUBOUTIN VERSUS YSL EDITION”