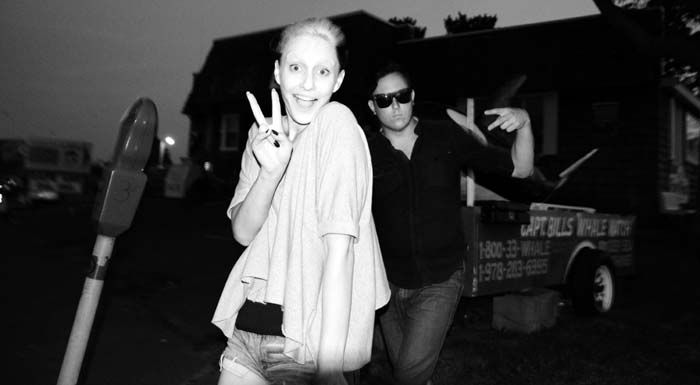 The inimitable Nastasia and her lackey of a partner, moi, leaving Gloucester late last night. We spent the day along the shoreline, snapping some rather iconic New England scenes with photographer Conor Doherty, suffering sunshine in the name of fashion. [Photograph courtesy of Conor Doherty.]

I’ll admit it: I’m starting to really like living in New England.

August 18th will mark the 3rd anniversary of my move to Massachusetts. But I’m not big on anniversaries. Hell, hardly any of my friends even know my birthday because I find such celebrations contrived. Why ‘celebrate me’ on the day I was born? I didn’t have much to do with that event, really, and all things considered, would probably have done it a bit differently. But that’s neither here nor there. Back to that anniversary…

When I first moved to Boston I was a foreigner. The city felt new, fresh, alive and utterly alien–a city to be explored and discovered, on my own terms. To say I was excited would be a gross understatement of the situation. I was ecstatic. Then came the inevitable realization that I had uprooted myself in almost every possible way, and, not long after, a near-violent loathing for Boston and for its people.  What seemed like the best capricious decision I had ever made took a rather nasty turn to the contrary. How I had not considered that what was attractive to me about Boston also meant I would have to start over completely?

My greatest hurdle was not professional, it was personal: I couldn’t make a friend to save my life. Experience has taught me that my personality is a polarizing one: you either love me or you hate me. But Bostonians didn’t react that way at all. Generally speaking, they were perfectly indifferent.  Cold, even. I spoke to nearly ever stranger on the street, complimented more women for their hair or their handbag than bears repeating (this works wonders in California, LET ME TELL YOU), and made more futile attempts at friendship than I can suffer to share.  A lot of side eye, a lot of  “I’m sorry, who are you and what is that you are wearing?” And goddamn was it discouraging.

But I’m one stubborn SOB. I wasn’t about to pack up and head back to sunny Santa Barbara, no matter how many people told me to do just that. One man’s narcissism being another man’s determination, I decided I was staying. Whether you (or I) liked it or not.

This isn’t a David v. Goliath story, and I certainly won’t go the way of Phineas or Gene, so I’ll just cut to a year later, when I began to find my rhythm here in Boston…

First, I met Katie Archambault and Rachel Moniz at the Liberty Hotel. I can only imagine how annoying I must have been: overeager, vaguely deferential, just plain schoolboy excited. But from that very first meeting, both were supportive of my ideas, my initiatives, even my many (many!) idiosyncrasies. Katie just smiled at me and said nonchalantly, “Yes, sure, let’s do a show.” Uh, wait, this is Boston. It can’t be that easy, right? But it was, and confused as I may have been I was delighted they seemed to be in my corner. These two were the first to let me do what I do, to trust me enough to really explore some creative territory, and I am forever grateful to them for that confidence, and that opportunity.

It was through my connection to the Liberty that I ultimately met Heather White, who was then the creator and editor of this very blog. It was an installation of Fashionably Late. She was hosting and I was styling the show. I stared at her across the room for who-knows-how-long before I finally mustered the courage to approach her and introduce myself. She was beautiful and passionate and sensitive and unabashedly kind and dressed to KILL.  We danced in the middle of the night to En Vogue in her bedroom, under a string of christmas lights which normally I would find insufferable. They could not have been more beautiful.

Come February, Heather decided to introduce me to Terri Stanley, the creator of StyleBoston. I was not yet halfway through shaking Terri’s hand when I blurted out that I was going to claw my way into her office. She suggested a meeting instead. We met, and at some point in my inexhaustible blathering she told me, yes, I could start working for the show as the wardrobe stylist, dressing each of the segment hosts. I became more, and more, and more involved in the project. About eight months later, I was officially named the Producer for Fashion Forward. Within a year I had received a regional Emmy nomination for the very first segment I produced.

Not long after I started at StyleBoston, I popped across the office hallway at Shag for a haircut. If you’ve been, you know the staff at Shag is anything but understated. One girl, however, struck me.  What is more: she looked awfully familiar.  To cut to the chase: that girl was Brigid Nastasia, with whom I would later cofound both the fashioncentric creative services firm CONTRA and the Emerging Designer Fund, a Boston-based program which provides money and mentorship to superlative local talent.

The irony here is that the first time I met Ms. Nastasia she out-and-out dismissed me. She does not deny this, as we both rather enjoy telling the story these days:

She was standing in line beside me at some seedy bar for some seedy show and I complimented her. She was and is stunning, and in a way that is so unconventional it forces you to reconsider your established definitions of beauty. Either way, my compliment wasn’t especially compelling, and she responded to my trite request to photograph her by saying, ‘If I had a dollar for every time someone said that to me…’ and walked away. I did not see her again until I realized that girl at Shag was the beautiful girl who had dismissed me so casually months before. She was too cool for me then; she was certainly too cool for me now. But being perfectly insane (and perfectly incapable of accepting rejection), I made it my mission to wear her down.

I still haven’t done that (and doubtfully ever will), but we do work together now and she has become one of my closest friends. We’re a bit yin/yang and we like it that way.

All this really demonstrates was my misguided approach to settling in to a new place, and the extent to which I had to disassemble my  own constructs of social behaviour in order to adapt to new surroundings. Oh, and that being a persistent prig generally pays off. I found my own way to do all of that, and damn has Boston been good to me since.

As I stood on the dock yesterday evening in Gloucester, the sun lazily hanging over the horizon, riding an incredible high from the shoot we had just wrapped, I thought about how much had changed in the short time I have been here and realized the simple truth: I had found a new team, a new crew. And Boston wasn’t and isn’t better or worse than where I’m from. It’s simply different. And wasn’t that what I wanted in the first place, anyway?

But no, for those who would inquire, I have not yet taken to Clam Chowder and I still couldn’t care less about the Red Sox.