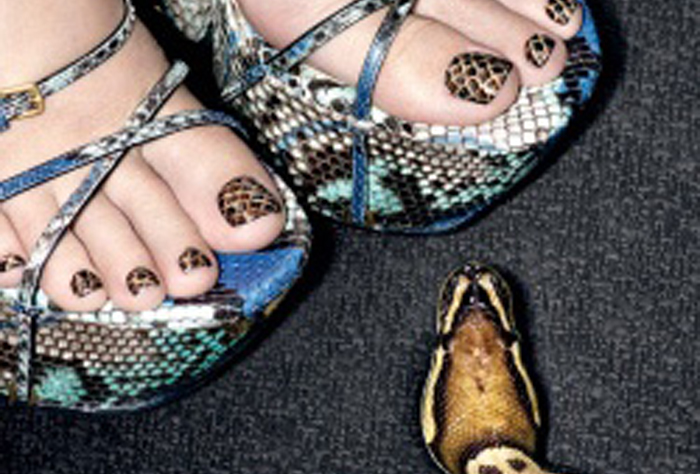 Unable to fall asleep in the sweltering heat (never mind my being a night owl), I distracted myself as best I know how: had my late-night TV on, channel dialed to E! for much-needed background noise as I typed away for some SB-lovin’-n-bloggin’.

Then it hit me: a mixture of awe and fascination at the new trend the all-tanned-and-dolled-up Giuliana Rancic was peddling. Genuine snakeskin manicures and pedicures. No, not a manicure to emulate this exotic skin. A manicure OF the exotic skin. According to the pointless pundit, they’re all the rage.

The ‘creator’ of this phenomenon, Terri Silacci, stressed that the skins are sourced ethically, all having been naturally shed. But frankly, that wasn’t the first question that came to mind, so much as: WHO THE HELL IS ACTUALLY DOING THIS?

For editorial (like the image above), it’s an incredible concept, bringing interest to one of the single-most neglected finishing touches. But what not-6’1″-and-five-lb-woman, here or anywhere, can you imagine strolling down the street with snakeskin on her nails?

Thanks, Giuliana, for another perfectly useless tip. Pun intended.