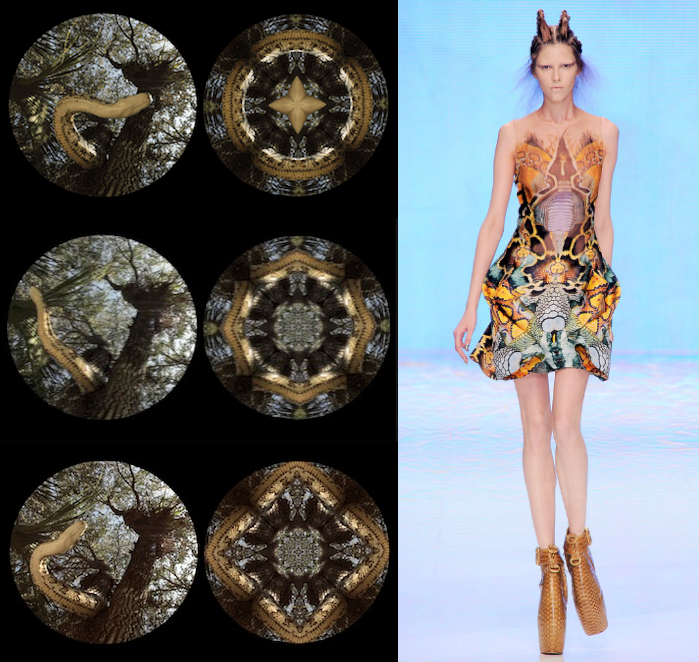 When I walked into Leslie Thornton’s solo show at Winkleman Gallery earlier this year, I could tell in the blink of an eye that this would be my favorite exhibition this trip through the Chelsea galleries.  Thorton’s exhibition, titled “Binocular”, showed a series of videos that had two circles within each frame.  The first circle played a real time video of an animal in the wild, the second, a kaleidoscope image of that video, where the frame was refracted and multiplied numerous times using a remapping algorithm.

These images immediately evoked the current trend in textile manufacturing, specifically, Alexander McQueen’s Spring 2010 RTW show.  The minute swishing back and forth of the fabric worked similar to Thornton’s video works, in that even the tiniest move of the animal caused the whole image to alter substantially.   McQueen’s extreme attention to detail ensured that his dresses would change dramatically with movement, and their cinematic and spectacle quality make it near impossible to wrench yours eyes away.

Both McQueen’s gorgeous dresses and the video work of Thornton show an interest in the natural and organic – an interest that is subsequently warped via technology.   That being said, Thornton’s show was over a year after McQueen’s, and was viewed through a completely distinct lens.  Where McQueen’s show instigated discussions surrounding horror and sci-fi films, global climate change and the impending end of the world, Thornton’s leaned more to the metaphysical side, provoking comparisons to Buddhist Mandalas, Rose windows, and other central core forms with spiritual associations.

My questions to consider are these: in a world where art is typically considered higher than fashion, what happens when it is clear that a trend in fashion has clearly inspired and stimulated the work of an artist?  The fracturing of an animal’s body in order to reinterpret the idea of an ‘animal print’ is one thing, but what can one say once this idea is put into an art historical context?  Is it imperative that these ideas are addressed in these two realms separately?

I feel that although these two forms of expression can clash on many levels, it is important that they exist in conversation with one another, for they frequently resonate and inform one another in intangible ways.  I appeal to you all to treat both with equal respect, for creativity’s outlets are numerous and should not be situated within any hierarchy.

1 thought on “WHEN FASHION PRECEDES ART”