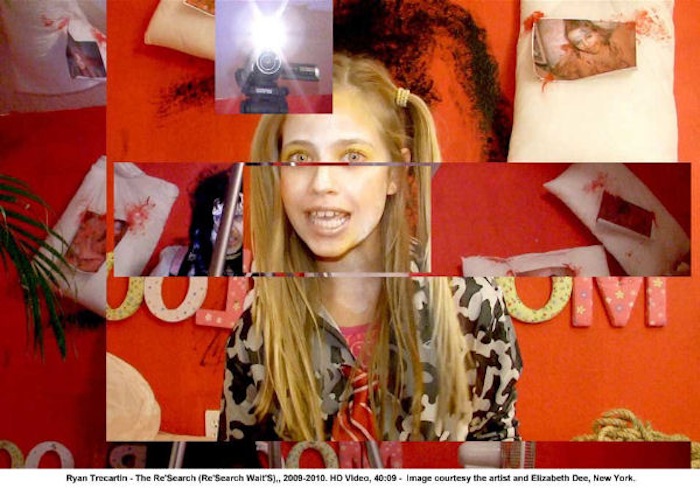 Recently opened at the PS1 division of MoMA is Ryan Trecartin’s new video installation: Any Ever.  The show consisted of the artist’s 2007 – 2010 body of work, produced in Miami with Lizzie Fitch, the artist’s longtime collaborator.  Trecartin is a Houston native who graduated from RISD in 2004, and has since gone on to receive multiple awards and has been in numerous shows, including the 2006 Whitney Biennial, the Younger Than Jesus show at the New Museum in New York, and solo exhibitions at the Power Plant in Toronto and MOCA in Los Angeles.

Trecartin is a visual mastermind when it comes to condensing and representing the influence of technology in the day to day lives of the majority of the first world.  His work creates an ADHD paradise where discursive thought processes become hyper shortened, reflecting how our phenomenological understanding has transmogrified since technology’s inception.

Images and text and sound and time: nothing isn’t disorienting in his work, and this hyper-culture that is created serves a double duty – it shows technology’s capabilities in video art and editing, it also makes me fear for my life.  Trecartin creates turbulent webs consisting of memes and pop culture references that are punctuated by larger questions of gender identity, cultural and racial stereotypes, and the problematic nature of the current job market.

Each cleverly layered frame (literally – he uses transparency and overlays in editing like his life depends on it) works to build a universe that is questioning what our values have become, what is worthwhile to us as a species, and how we externalize thoughts and feelings in a world where direct human contact is quickly losing importance.

Any Ever consists of 6 videos of varying lengths in 6 separate rooms, each decked out in strange and incongruous mixtures of commonplace household items and other rather odd groupings of items that we commonly associate with middle-to-upper class living.  Example:  a room of white leather Ikea chairs, 1 hammock, and a centrally located metal picnic bench, all surrounded by large zipped up luggage bags.  Each ‘seat’ has a pair of headphones attached, where the sound to the video plays at a volume level just a couple notches above comfortable.  The whole experience is beyond disorienting (I had to take a break in the middle and come back to finish the last three videos), and this is further substantiated by Trecartin’s extensive exploration of the fuzzy areas between gender, race, and ethnicity.

Despite the silliness and entertaining nature of many of these videos, each is so over the top it does not fail to question issues of a graver nature.  The artist does not shy from macabre and unflattering depictions of humanity, and his disjointed and frenetic chopped and screwed narratives hold your attention just long enough to make you fear for your future.

The show will be up at PS1 MoMA, located in Long Island City, until the 3rd of September.   Watch more clips on Trecartin’s Vimeo Channel.