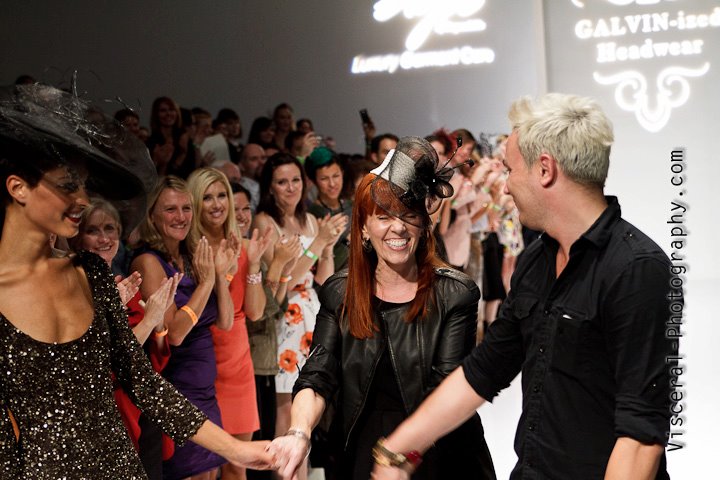 It takes a certain amount of chutzpah to pull off wearing a hat–an amount that typically hovers above the (mostly hatless) heads of most Bostonians. Hats say: Look at me, damn it. Now. And: That’s right, bitch. I’m someone to be reckoned with. If not even sometimes: You know you wish you had guts enough to wear this. None of which are sentiments most New Englanders are exactly comfy with. The ubiquitousRed Sox cap notwithstanding, hats just aren’t our thing.

I’d reckon that was all changed last Monday night. The Boston Fashion Week show of Marie Galvin, milliner and longtime Boston fixture who for years has struggled with a local aversion to flamboyance, had just that kind of impact.

That’s largely because Galvin made two very smart decisions for the show: First, she went for wearability. Gone were her outrageous sculptural creations that may look beautiful behind glass, but would all but eclipse their wearer. (And have, in the past, emitted squawks of, “Where on earth would I wear that?“) No, she kept things earthly, unpretentious, and simply pretty with intricate fascinators festooned with netting and feathers; pom-pom topped wool caps; ’20s, ’30s, and ’60s-inspired numbers topped with petite poofs of feathers. The only hints at architectural derring-do–a fascinator of silk multi-curls here, a gorgeous, asymmetrical black meringue for the finale–were still sized well enough that they stayed proportionate to the models’ heads. Meaning they came off as daring rather than overwhelming or silly.

Her second smart move was tapping CONTRA to style the show, all the clothing and accessories pulled from Neiman Marcus with an eye toward elegance and streamlined refinement that still nodded to the runway. Gauzy blouses, python-patterned pencil skirts, silk shift dresses, and fur-collared coats–all of it a mostly neutral palette, and all of it as ladylike as it was edgy. They were the perfect foil for the hats–and arguably the most convincing argument for the hats themselves.

Together, Galvin and Contra showed Bostonians that not only are hats wearable every day; they showed them how to wear them–as an improvement to an already spectacular outfit. That’s the kind of equation capable of proving to the hatless public that style statements are nothing to be afraid of. And that, even as vintage-inspired as many of Galvin’s creations may be, is an idea that’s time has finally come.