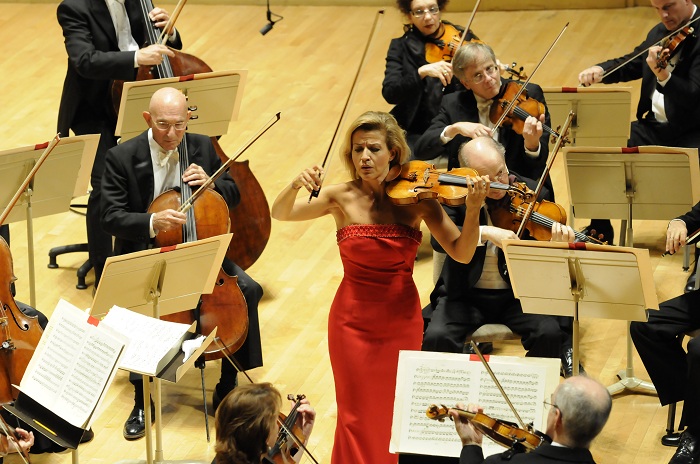 This weekend the Boston Symphony Orchestra opened its 2011/2012 season, the first sans longstanding conductor James Levine. On the program were Mozart’s five violin concertos, performed over two consecutive evenings. It was a bold choice for the BSO, as of those five concertos only two—the third in G Major and the fifth in A Major—enjoy any notable popularity. The first and second concertos, while clear examples of Mozart’s early musical genius, are hardly ever played. The fourth is played more frequently than the first two, but not by any great margin. Clearly, the BSO understood: the third and the fifth concertos were slated for Friday’s Opening Gala; the remaining first, second and fourth concertos, the night thereafter.

The reason the BSO could afford potentially putting off its patrons with the latter program of less-popular material was simple: Anne-Sophie Mutter, the acclaimed German virtuoso, was scheduled to lead the orchestra as both soloist and conductor. While Ms. Mutter possesses many of the ‘star soloist’ characteristics that sell tickets–an award-winning recording career, performances in every major city, with every major orchestra, a sterling educational pedigree, etc–what separates her from her contemporaries is not her glittering CV. It is, rather, the distinctive and arresting emotional language of her playing.

That said, in the spirit of putting my attention span to the test, I opted for the latter of the two programs. [Having played the third and the fifth concertos in my younger years, I had little interest in seeing them performed. Frankly, even the rich musicality I expect of Ms. Mutter could not have erased the memories of being forced to play those works. All that frothiness, the lightness of bow, the incessant trills and superfluous grace notes. Give me Dvořák’s Concerto in a minor or give me death, thank you very much.]

When I entered Symphony Hall just before 8PM on Saturday there wasn’t an empty seat in sight, save, thankfully, for mine. It is a testament to Ms. Mutter’s appeal that such a program appeared to be sold out, an otherwise unlikely scenario for a roster of concertos which most of the audience had doubtfully ever heard.

On the stage there was a significantly pared-down ensemble–one more in keeping with the chamber ensembles that would have performed these concertos during Mozart’s era. This more intimate arrangement, coupled with the lingering absence of Mr. Levine, seemed to suggest that the BSO would be doing things a bit differently this season. But the real focus was always Ms. Mutter, as the entire audience waited with bated breath for her to grace the stage.

Ms. Mutter did, in fact, grace the stage. First, with a black silk-satin and chiffon gown, and then, and much more notably, with her musicianship.

Throughout the program, she demonstrated an incredible range of voice in her approach, shifting effortlessly from fury to finesse, from defiant, heavy-fisted vigor to the most ephemeral effervescence.  In each of the three concertos, she transformed perfectly ordinary motifs into something divine: sustained single notes which hovered above the room for a time and then melted away into nothingness; passages rife with deceptively difficult technical feats, wherein Ms. Mutter would jump from the G string to the E string (that is, skipping the two middle strings altogether) with aplomb; and her handling of Mozart’s characteristic, and nearly constant, trills–the rapid fluctuation between two notes. Typically, trills are almost purely decorative, but in Ms. Mutter’s hands they were sublime phrases in their own right, evocative of mischievous songbirds.

And yes, her many cadenzas–those perfunctory exhibitions of sprawling technical virtuosity–were certainly impressive, but it was during the fleeting minor motifs that she most impressed herself upon the audience. In these passages her tone was at its richest, languid and robust, one supple sostenuto after another. She seemed to burrow into the somber phrases and then languorously emerge, as if with a prolonged sigh. In short, her command of her instrument was often eclipsed by the conviction with which she played, inviting the audience into a musical experience as rare as it was otherworldly.

It is true that her sometimes less-than-traditional approach has earned her a Purist critic here and there, and I will admit that Ms. Mutter did seem most at home in Mozart’s music when she was playing his lighthearted Classical-era motifs with her trademark Romantic-era pathos. Yes, she took certain liberties: a generous and wide Germanic vibrato (which is not wholly historically accurate), a reoccurring rubato (the lingering to elongate a phrase–again, not wholly historically accurate considering how often it was employed outside of the composer’s notations), and, perhaps most frequently, her playing many already-rather-fast passages so rapidly that they were nearly indistinguishable, save for the passing effect they created. But it was precisely because of these liberties that the concertos, which to me have always felt claustrophobic in their ebullient simplicity, were suddenly fresh and relevant, intensely expressive instead of merely elegant.

The BSO did a commendable job of complementing Ms. Mutter’s musicality, especially considering that concertos like Mozart’s have a way of relegating the ensemble to a strictly supporting role. This pared-down setting seemed instead to highlight the individual musicians, affording a level of nuance often lost to the grand swell of a full symphonic setting. Gone was the stiffness, the separation between ensemble and soloist, the rigid call-and-response. At times, the relationship between the BSO and Ms. Mutter was so intimate I felt as though I was watching a relaxed rehearsal among close friends.

For the Boston Symphony Orchestra, this opening night series could have served to underscore the absence of Mr. Levine. Instead, it was a resounding celebration of those present:  the dynamic virtuoso and the committed musicians of the BSO who, with or without their beloved conductor, are not only moving forward, but moving ahead.