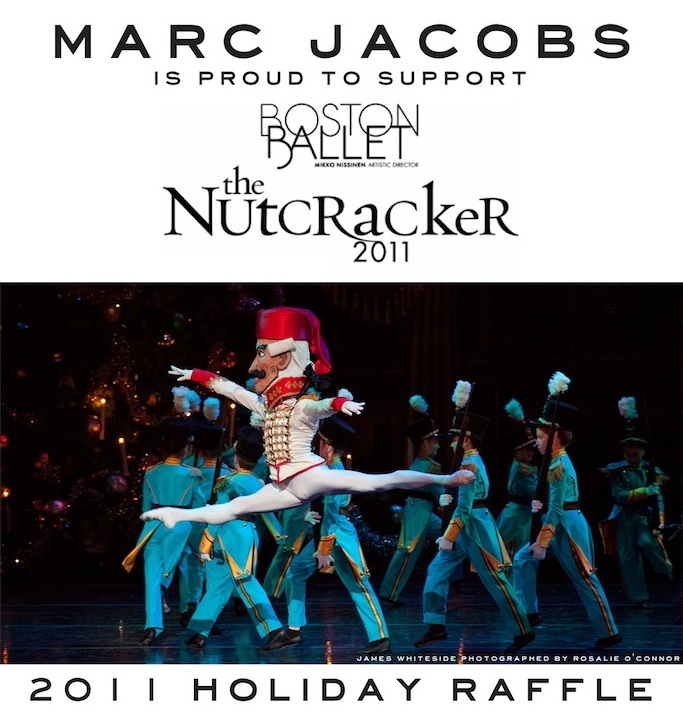 What is cool, however, is that Marc Jacobs has started a special promotion to support one of Boston’s greatest cultural institutions, the Boston Ballet. In all seriousness, two programs from last year’s season at the Boston Ballet had me in tears, and, as you’ve probably surmised from reading my misanthropic tomes, I don’t much fancy crying. The dancers and the repertoire are really just that good. James Whiteside + Lia Cirio = OTHERWORDLY AND BREATHTAKING AND OMGWHATAMIWATCHINGTHISCAN’TBEREAL AND WAAAATAMICRYINGDAMNYOUDAMNYOUDAMNYOU. And of course we all already know that Marc is dope.

Want to do your part? Marc Jacobs is making it easy-peasy for you. Through December 31st, all you have to do is:

1) Go see the Boston Ballet’s Nutcracker because a) it’s incredible and b) this is the last year the ballet will perform the now decade-running production. It will be revamped next year.
2) Keep your ticket stubs.
3) Take said ticket stubs to Marc Jacobs at 81 Newbury Street, Boston, MA.
4) Be super proud of yourself because…

Marc Jacobs is donating a crisp dollar bill to the Boston Ballet for every ticket stub submitted. Basically, you enrich yourself by seeing the Ballet (Hi, you’re a cultural noob, get on it) and then, without doing anything except exercising your way to MJ, you support the Ballet alongside, you know, Marc Jacobs and his crew of übercool, acid-washed-denim-wearing, tattoo-having, always-smiling-because-they’re-cooler-than-you-but-still-somehow-unnervingly-nice cats. (I realize saying übercool cats = me not being cool at all. TOTALLY AWARE KTHX.)