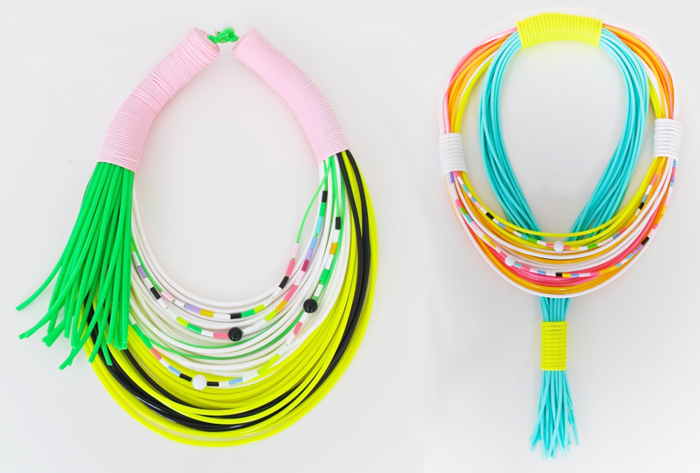 P.L.U.R. (peace love unity and respect) are the four pillars of raver culture.  This acronym is frequently featured on the brightly colored ‘Kandi’ jewelry that so often adorn the limbs of these ecstatic dancers.  Now, I’m not saying you should walk out of work right this second and buy super baggy neon pants and furry ears to wear around on the daily, but there is something magnetic about the colors featured in this culture, and Blandine Bardeau, the French jewelry designer has very succinctly captured this fluorescence in her pieces.  These are by no means understated, in fact, they are outright loud, yet they carry a beauty that evokes Zulu tribal jewelry, Native American beadwork, and most notably the aforementioned London rave scene.

Blandine Bardeau graduated from Central Saint Martins in 2009, and in addition to her jewelry she actively pursues illustration.  In both mediums she deals with the fantastic, allowing for a graceful touch of the absurd in all of her work.  Despite her newcomer status, she has already designed and put together jewelry for a Selfridges storefront, had her jewelry featured in many music videos, and has pieces that can be purchased in stores all over the world.