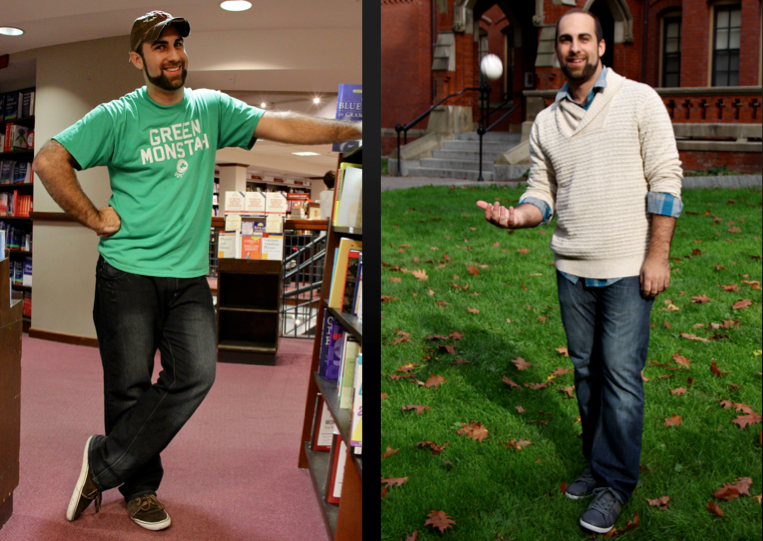 Last year, GQ magazine gave Boston the scarlet letter of Worst Dressed City in the U.S. Here at Styleboson, we were beyond moderately offended by being described as “undergraduate hoodie monsters” dressing like “proprietors of his or her very own meth lab” at “the biggest frat party on Lansdowne.” Ouch, that came out of left field. We are ok with the obnoxious sports fan label but frat bro? Oh no they didn’t.

Although it has been a year since the article, it has remained in our hearts like that comment THAT ex said to you in the middle of a break up fight that cut you real deep but it’s kind of true and two years later, you still cry about it. Yeah, we are still dwelling. So we hit the streets from Southie to Cambridge recently to prove them wrong. Unfortunately, what we saw under our style microscope was disheartening…Dirty Sox hats trudging down the sidewalks, holey Pats t’s sitting at the bars, Celtics jerseys on the beach all anchored with jeans that would fit a man twice their size and sneakers that were probably around when Britney Spears was still dressing like a Catholic school girl. Boston sports fans need a serious fashion intervention. 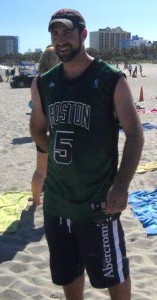 First up to the plate is Justin.
Stats: 24 year old writer/editor, grew up North of Boston, lives in Somerville, loves the Sox…He is your typical fun-loving, Bostonian guy.

Our goal… to show that any Sox Fan can be a Soxy Man.

Typically, when guys from Boston hear fashion and makeover in the same sentence they immediately tense up and think European discoteque or Cam from Modern Family. When Justin agreed to participate, his only concern was, “Please don’t make me wear pink.”

Justin met me at the Harvard Co-Op in Harvard Square wearing a $10 “Green Monstah” t-shirt, baggy jeans, brown sneakers almost worn through the soles and a brown, tattered Red Sox hat from 7th grade. I was later informed that the hat was blue when he bought it. Time for an upgrade? I think so.

The outfits we selected for Justin needed to be sleek and well-fitted in addition to being comfortable and realistic for the active, young professional. We took pieces that men love to live in (jeans, t-shirts, sneakers) to show that they can look fresh, sophisticated and fashionable while still having that sports fan at the bar with his buddies look. To do that for the first outfit, we chose a button up shirt with a unique but manly blue and gray color palette and paired it with an off-white cowl neck sweater that most guys would scoff at in a store. Once we got it on him, he seemed to approve, “When my mom sees these pictures, she will be amazed that someone actually got me in a sweater. Not bad.” 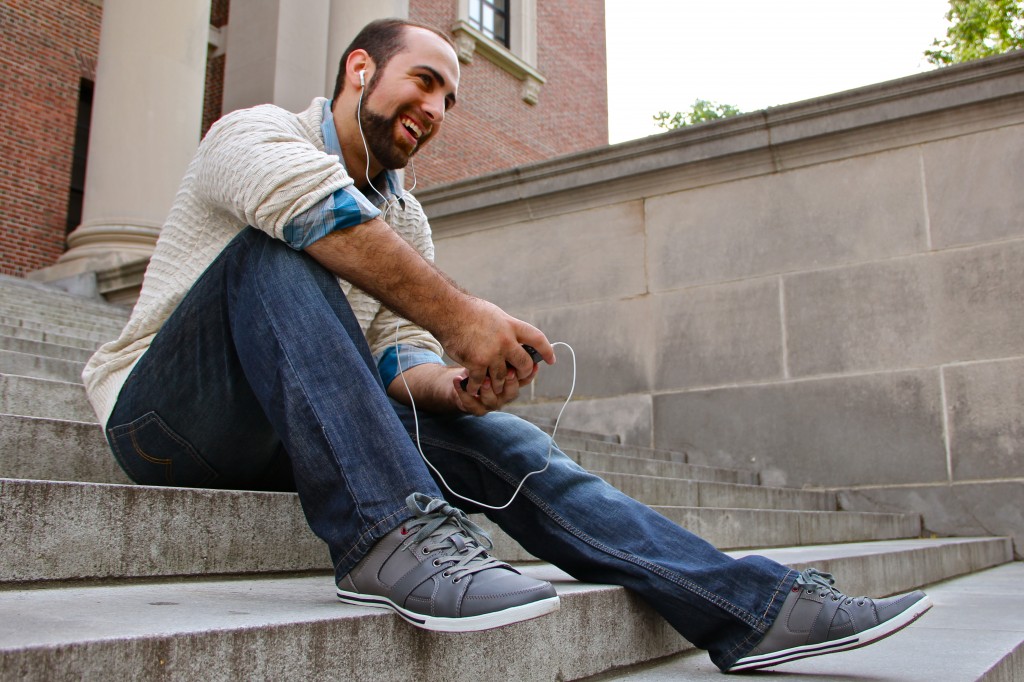 Although he pledges his allegiance to the Red Sox and all things baseball, he allowed us try out a football ensemble for the second look. For this, we wanted to show that sport team t-shirts can work as a fashion statement if worked the right way. The most effortless way to accomplish this is to take a vintage-inspired shirt and pair it with a solid color hoodie or, as we did, with a dark gray cardigan. If we thought the off-white sweater from the first outfit was a hard sell to most men, a cardigan is even worse. But when it was all put together, Justin had not problem tossing the football around Cambridge in public. 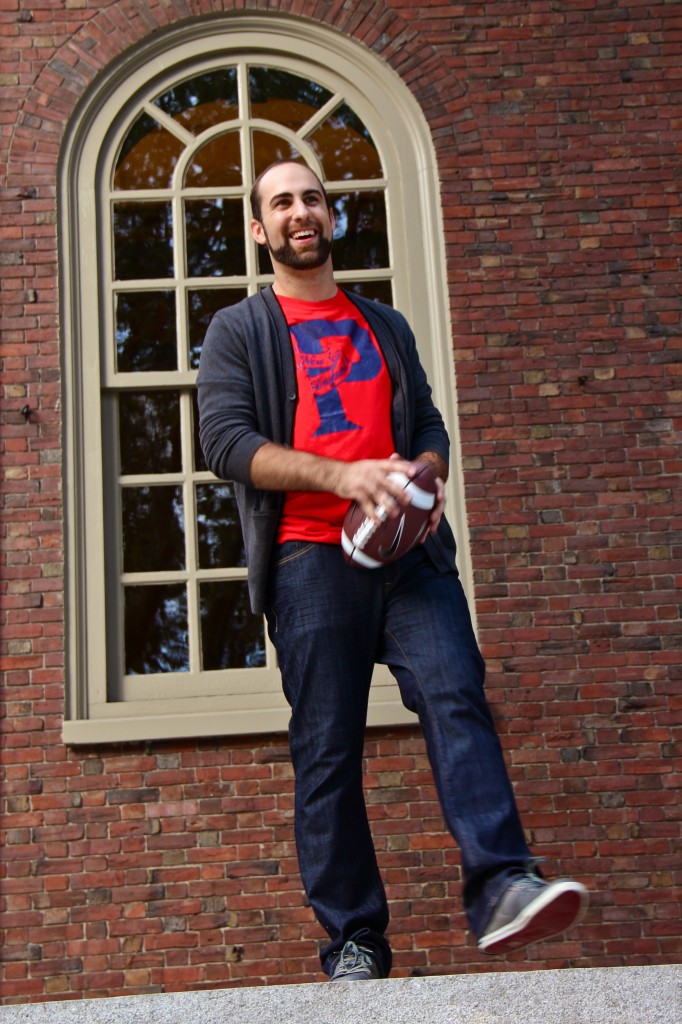 This makeover stuff might sound a bit scary to Boston guys. Justin was little skeptical too. But when he bought the blue and gray button up, the dirt-wash jeans and the shoes used in the photoshoot for a second date he was going on later that night, I think it is safe to say we hit it out of the park. From what I heard, his date was pleased as well. 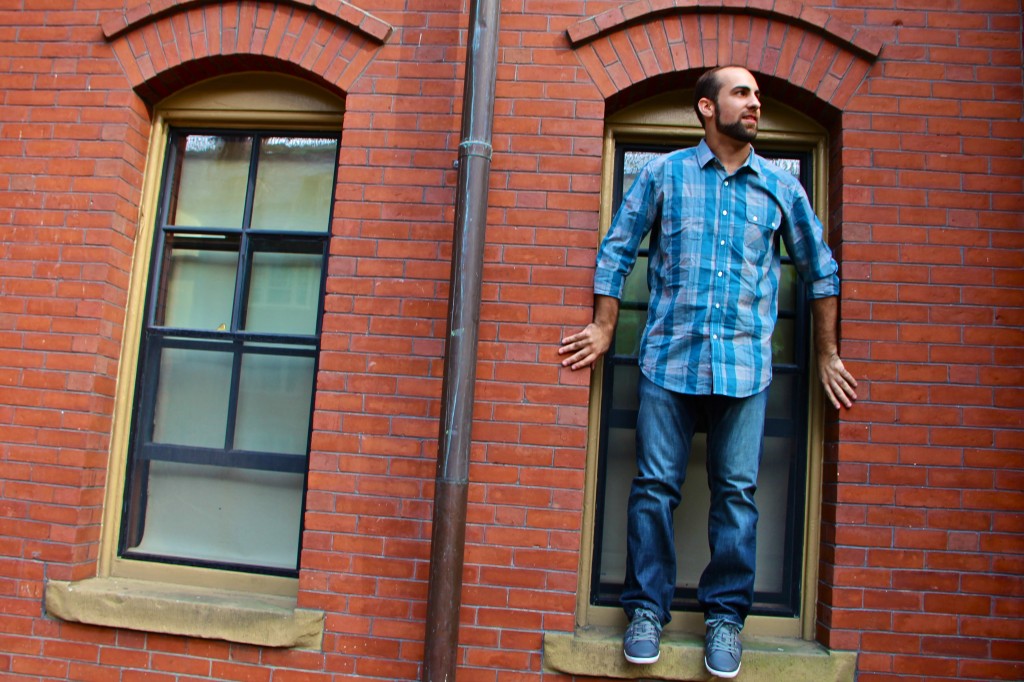 So lesson for men, be adventurous with clothes. You don’t have to be European or from New York to look good. And please throw away your Red Sox clothes from middle school.

Like the clothes from the makeover? Get them here.

See more from our photoshoot with Justin at With An E Photography.