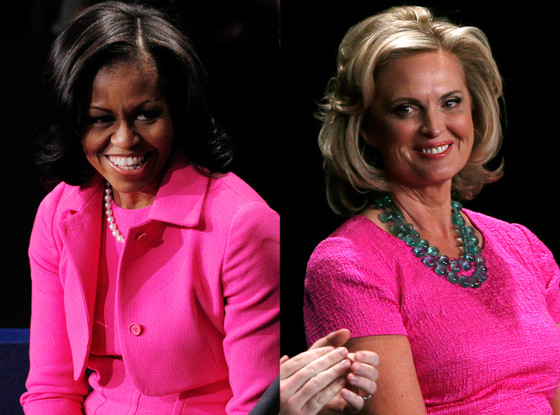 In a stagnant pool of navy and black suits in the political arena, current First Lady Michelle Obama and First Lady hopeful Ann Romney painted the town pink at the second presidential debate in Hempstead, New York last night. The reason as to how they managed to wear the same exact vibrant color is yet to be determined. Some have speculated they were showing their support of Breast Cancer Awareness Month.  But as their husbands duked it out at the podiums, the women were developing their own nationwide debate… Who wore it better?

With nearly identical hues of Schiaparelli pink, it was the shapes, accessories and overall rocking-of-the-look attitude that will determine the winner.

Even though Mrs. Romney has often been criticized for her lack of pizazz in the fashion department, she is making attempts at gaining wardrobe recognition before the big election day in November. Like her husband’s politics, Ann’s clothing choices are sophisticated but conservative. She usually appears put together but never show-stopping stunning. Last night’s choice was part of a strand of fashion risks she has been taking in the last few months. The former Governor’s wife looked lovely in the short sleeve, textured dress accented by a sea foam green beaded necklace. Unfortunately, her blonde hair created a Barbie-affect that, when compared to the edgy Democratic fashionista, is hard to compete with. 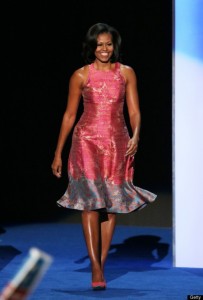 It has been clear since inauguration in 2008 that First Lady Michelle O. is this fashion generation’s Jackie O. Similar to Kate Middleton, one night she wears a dress and by the next afternoon, there are none left on the racks. When Michelle arrives, it’s not even a question that everyone will probably want to be her. But, the matching cropped blazer-dress combination topped with a pearl necklace was not the most exciting piece she has worn recently, especially after the fabulous Tracy Reese dress she dazzled in at the Democratic National Convention last month. Last night’s silhouette hugged her curves beautifully but was the dress too safe for the otherwise adventurous dresser?

What do you think? Should we dub Michelle or Ann as Presidential Fashion Debate winner?