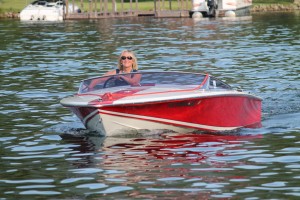 Emily Rooney is an enthusiastic lover of vintage cars and boats – particularly the ones that go fast. It’s an area her nightly television program, “Greater Boston” on WGBH, doesn’t cover too often, so weekends you might find her at Larz Anderson Park’s “Cars and Coffee” or up at the family lake home in the Adirondacks. She also describes herself as a “shopper” – one who’s aware of what’s kinky, kooky, or just plain cool. She’s also current on the restaurant scene and makes the rounds on the charity circuit. You can catch Emily Rooney Monday-Friday at 7pm on Channel 2 or tune in for her infamous “Emily’s List” Fridays at 1:00 on 89.7 WGBH-FM.