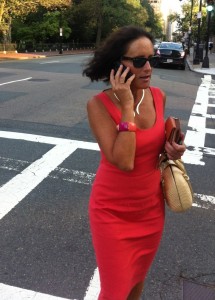 Jan Saragoni is usually so busy running her eponymous public relations and communications firm that trying to schedule a photo shoot proved impossible. That’s why we had to snap this shot of her in her “casual Mondays” garb shortly after she left her firm’s headquarters, which also double as the second floor of her Cambridge residence. A Boston native who initially trained as a reporter, Jan knows every short cut from here to there and can rattle off every hotspot, former hotspot and the site of every great news story or moment of history along the way. Unfortunately, she drives like she is from Boston and has yet to offer a reasonable explanation as to why her closest friends and family members refer to her as “Jane” or “Janie.”  She is fluent in Italian, and holds an Italian passport, which makes it all the more confusing why she owns a home on the Greek island of Hydra. The styleboston.tv staff has learned that she has been asked by friends in the publishing world — who should know better — to consider writing a book or travel piece about her Hellenic adventures.  Jan has suggested “Under the Trojan Sun” as a possible title and can’t understand why that might not be as clever an idea as she thinks it is.