Liam Kennedy, 39, a Babson College graduate and soccer player was living his dream six years ago. He had a great job at Bain Capital in Boston, a lovely wife-to-be, Jennifer, loyal family and friends. Then he found out he had multiple sclerosis.

“It wasn’t what I expected to hear as a relatively healthy 33 year old,” Kennedy said of his diagnosis. “I was pretty lost, I was confused, I was mad. I wasn’t at the greatest point of my life.”

According to the National MS Society website, multiple sclerosis is a disease of the central nervous system that disrupts the flow of information within the brain and from the brain to the body. It’s very unpredictable, and affects each person differently. Some people have what is called relapsing-remitting MS, where symptoms flare up temporarily, and the person recovers all or most of their mobility with time.

The other form is progressive MS, where there is a steady decline in neurologic function from the beginning.

Immediately after his diagnosis, Kennedy’s friends and family rallied around him. While searching for ways to help find a cure for MS, they came across a bike ride that raises money for the National MS Society called the Cape Cod Getaway. It’s a 2-day, 150-mile ride from Boston to Provincetown. Perfect, they said, and so the team “Liam’s Lucky Charms” was born.

“We were more like the ‘Bad News Bears’ of biking,” laughs Kennedy.

“Most of the people on the team hadn’t been on a bike in 15 years and back then, they were most likely riding around on a Huffy or BMX in their neighborhood or drive way,” he said.

Kennedy may have been amazed, but the people at the National MS Society were not.

“He’s like a magnet for people who want to be involved in something positive and life-changing,” said Lori Espino, Chapter President for the National MS Society.

“Liam is a natural leader. Not only are people drawn to his personal message about ending MS, he helps everyone on his team achieve and aspire to do more,” said Espino.

And more is exactly what they did.

The following year, Liam’s Lucky Charms had 24 members and raised $50,000. Kennedy’s company, Bain Capital was on board, as well as many of his co-workers. The team started doing other fundraisers benefitting the Society, including a stair climb at the John Hancock Tower in Boston and the MS Muckfest, a 5K race through a mud obstacle course.

Donations started pouring in — ranging from $10 to $10,000! Kennedy got more and more people to join Liam’s Lucky Charms and he inspired them to raise more and more money to fight MS.

At this year’s Cape Cod Getaway, June 28-29, Liam’s Lucky Charms had 148 riders who raised more than $325,000. That brought Kennedy’s total fundraising for the National MS Society to more than $1.2 million. 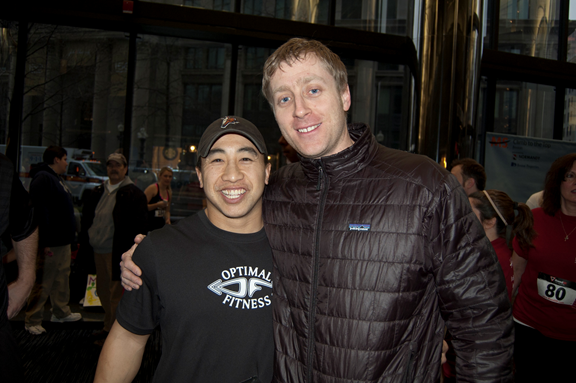 It has become a tradition for his team to congregate at the final rest stop 11 miles out and ride in together across the finish line. Kennedy led the way, as a DJ announced their arrival over the loud speaker and congratulated the team for breaking the one million dollar mark.

Kennedy’s family and friends cheered, as well as riders from the other teams. It was clear everyone wanted to share in the triumphant moment. 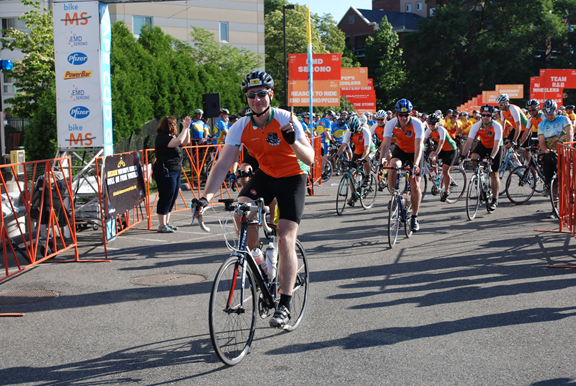 Once Kennedy got off his bike, he began a long stretch of high fives, hugs, backslaps, and fist bumps; the captain congratulating his team on how far they had come, not just in raising money, but also in raising up each other.

“If I look back at how we started; it’s inspiring, it’s incredible. It’s not something I thought we would ever get to that point. We started as a rag tag group of people just having fun and trying to raise money and now here we are.”

But, unlike a high-powered business deal in a big boardroom., success here, said Kennedy, comes down to just one thing.

“It’s about family, we are the LLC family, Liam’s Lucky Charms family. We brought in a lot of new members to the family and it’s been unbelievable to see them all get here.”

But like a business, success starts at the top, with a great leader.