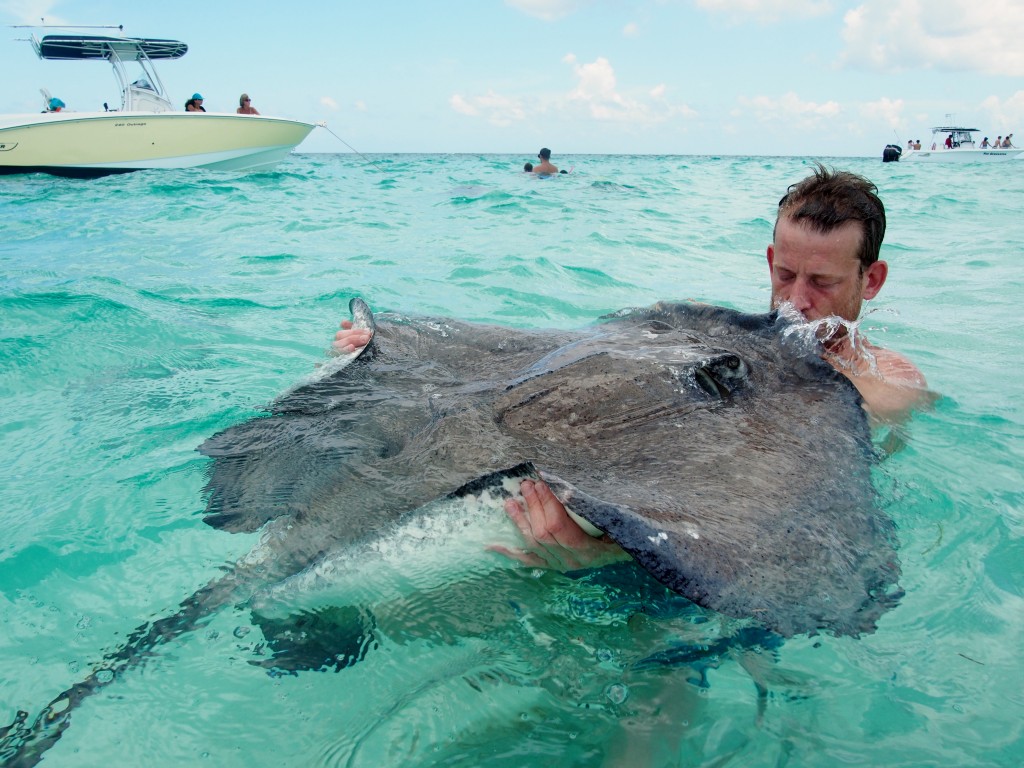 Exhaling, I sink gently to the soft, white sand seabed as a Southern Stingray ripples elegantly past. Scores of tiny, pearlescent Yellowhead Jawfish dart backwards into their little burrows, spitting mouthfuls of sand in apparent disgust as they retreat. Ahead of me, myriad reef fish swarm around the coral stack that rises sharply almost to the water’s surface. Our guide beckons us forward and I scan the tower for some sign of the promised swim through, marveling at the diversity of coral. As I approach, a tunnel opens before me, and, checking the group is with him, our guide sinks into its cavernous maw. The tunnel levels out and, taking care not to damage the fragile orange sea fans all around, we swim towards the dappled light ahead. We emerge onto the wall, a three foot Hawksbill Turtle drifting gently by on slow, powerful strokes of its flippers. It’s awe-inspiring. 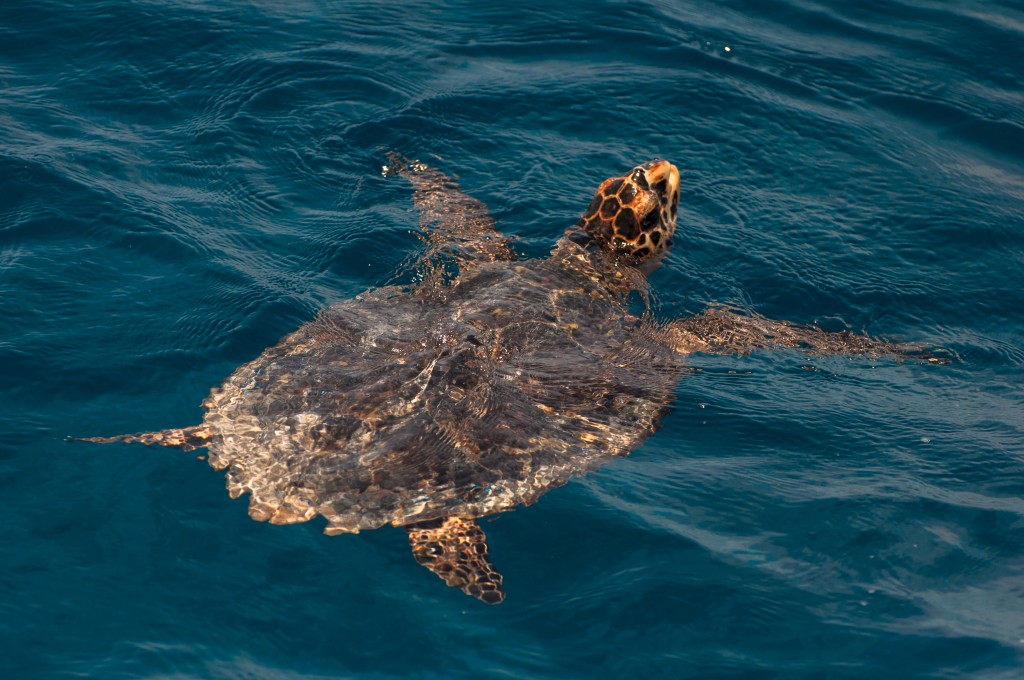 Located in the central Caribbean, the Cayman Islands are not, as one might expect, volcanic but rather the highest peaks of the underwater range that borders the 7.5km deep Cayman Trench that divides the North American and Caribbean tectonic plates. The group comprises three islands: Grand Cayman lies 150 miles south of Cuba and 180 miles west of Jamaica. Largest it may be, but at only 22 miles long and 8 at its widest point, it’s far from huge. Tiny Cayman Brac and Little Cayman (The Sister Islands) are close neighbors and lie 90 miles to the north-east. Grand and Little Cayman are just 35 feet above sea level at their highest points, while Brac’s geography is a little different, with dramatic cliffs on the bluff at the east end and a more recognizably Caymanian flat coastal plain to the west.

The porous limestone bedrock of all three islands allows rainwater to filter through and out to sea at some depth, with no obvious water run off to speak of. This means the sea surrounding the islands maintains its crystal-clear aquamarine color whatever the weather and is one reason for the islands’ reputation as one of the world’s best dive sites. Another is the well policed conservation policy on all reefs around all three islands, as well as, of course, year-round warm water and over 250 separate dive sites, including world-famous wrecks and coral walls. The clarity of water and predictability of conditions also make Cayman an ideal location for novice divers. Learning to dive isn’t what it was: the days of devoting long chunks of your holiday to the classroom are long gone. These days, the theory is done online prior to your trip, with practical skills easily mastered in a couple of sessions at your local pool. I trained with Oyster Diving (www.oysterdiving.com. Once you’ve mastered the basics, you are referred to any local dive center at the destination of your choice – most Cayman hotels either have on-site dive centers or an arrangement with someone nearby – and, after your four qualifying dives in the open sea (witnessed, if my experience is anything to go by, by a profusion of turtles and groupers and the like), your certification is in your hand.

But what of life above the water line? Cayman’s remote location makes it a great stopping point for many migrant birds (accounting for 80% of records) and is also home to 17 endemic bird sub-species and several notable regional endemics. Birds aside, the islands’ unique flora, butterflies and reptiles alone make it worth a visit. Much of the island’s fauna has evolved relatively unmolested and so even rarities are generally easily spotted. The diversity of flora is also extremely rich, with many plants bearing colorful local names: the red birch is known as the Tourist Tree, because its ‘skin’ turns red and peels. A caper plant producing gory looking bone-white fruit in a blood-red pod is known as Bloody Head Raw Bones.

Grand Cayman, with a permanent population of 50,000, is far and away the most developed island and easily earns its first world Caribbean reputation. George Town and its suburbs spread to the north and west and are filled with high end shopping and dining, much of which centers around the new Camana Bay development. Head to the extremities of the island, however, and its wilder side is quickly revealed. West Bay is dominated by the (actually 5.5 mile long) pristine, white sand Seven Mile Beach. At the north-eastern most end of West Bay is Barker’s National Park, home to a good variety of bird species, as well as a favorite destination for horse-riding, where you can have the unforgettable experience of riding a horse out to sea and swimming on horseback (info@ponies.ky). In West Bay itself, the friendly and relaxed Cobalt Coast Dive Resort has partnered up with Divetech, offering excellent diving at two locations – one eastward facing and one westward, both of which, uniquely among GC’s dive locations, have direct shore access to the outer edge of the reef. The dual locations allow for comfortable shore diving, even when wind is kicking up some swell.

Flying over to the Sister Islands is a dramatic affair, with stunning aerial views of azure seas and coral reef. Cayman Brac is the most ‘Old Caribbean’ of the islands, with a permanent population of 2,500, living largely in traditionally built houses. It’s very quiet and very pretty. The island is dominated by a rocky bluff, which forms a spine through the center of the eastern half of the island, ending in dramatic cliffs where Brown Boobies and Magnificent Frigatebirds nest. A large reserve cuts across the bluff to protect the Cayman Brac Parrot, easily spotted despite there being only an estimated 350 individuals left in the wild. There is an impressive wooden walkway across the reserve, allowing you to view the dense vegetation and rocky limestone beneath, without having to hack your way through it, and from which you can easily see two other delightful endemics: the Vitelline Warbler and the Red-Legged Thrush. Tucked into the side of the bluff are several caves, home to roosts of Jamaican Fruit Bat. The flat, western half of the island is characterized by more brackish pools, which support a large population of regional endemic West-Indian Whistling Ducks, among many other species of water-bird.

A short-hop across to Little Cayman and there is another significant iguana to track down. The Sister Islands Rock Iguana is still considered the same species as the Cuban, however momentum is gaining to declare this another endemic sub-species. Certainly the Rocks look very different from their more widespread Cuban cousin. Again, high salinity ponds line the island’s coast and one of these – The Booby Pond – is home to the Caribbean’s largest breeding population of Red-Footed Boobies, in both pale and dark morph, as well as more Magnificent Frigatebirds, Yellow-Crowned Night Heron and Double-Crested Cormorant. With a permanent population of just 250, Little Cayman is also one of the most unspoilt islands of the Caribbean. You are often alone on its long, white beaches and it’s a fantastic place to get away. The Pirate’s Point Resort has earned its reputation as a stand-out dive resort with exquisite food and a uniquely eccentric style. No surprise then that the bulk of guests return. Little Cayman diving is also, for my money, the most spectacular of the Caymanian lot, with the justly famous Bloody Bay Wall taking the well-deserved crown.

There’s a great deal to Cayman that belies its preppy, international banking reputation. The Caymanian Tourist Board offers free guided tours on all islands to any visitor and knowledgeable private guides are available to take things further. With well-established volunteer programs helping to protect everything from plants to turtles, via iguanas and butterflies, it’s also a place where it’s easy to get involved yourself and see your tourist dollar make the difference it so easily can.

3 nights at Pirates Point Resort, Little Cayman including 3 meals per day, some drinks, 2 days diving and a deluxe room

2 nights at Brac Reef Resort, Cayman Brac including 1 day diving and all meals

The cost based on 2 people sharing is from $2,150 per person ($450 discount for non-divers). Oyster Diving also offer a free Scuba Review (refresher course) or trial dive for non-divers on all bookings.

November to April. The British summer months are hotter and more humid, with occasional rain showers, which generally pass quickly. Although not on the main hurricane route, Cayman is rarely caught out.

Grand Cayman is very developed and has excellent pharmacies and other services. The Sister Islands are more basic though, so be prepared with any medical needs ahead of visiting. Good hiking shoes are essential, as is sun-screen, a good mosquito repellent and a hat. Divers should check in with their dive centre and bring necessary certification. Where they occur, hiking trails, such as the Mastic Trail, are clearly marked and well-cleared of any dangers. Avoid hiking off these trails as Cayman is home to several formidable species of plant, including the Maiden Plum and the Manchineel tree, both of whose sap causes painful blistering and, in the latter case, occasionally even blindness. All Caymanian guides are extremely well-versed in these plants and will delight you with horror stories as they teach you what to avoid. For more information visit www.caymanislands.co.uk.  For expert advice or to book guides, the Cayman Islands Department of Tourism mans a UK helpline on +44 207 491 7771 or can be emailed on concierge@caymanislands.co.uk