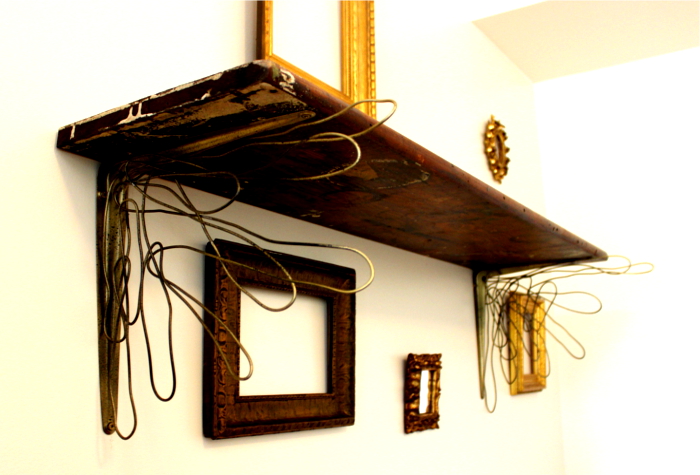 I found this in the filthy basement of my 100 plus year old apartment. It was lying on the ground next to the foundation where water often seeped through the cracks in a pile of dirt. The size and weight of the “shelf” intrigued me, it was quite thick and on the heavier side which led me to believe it was older. After perusing the Anthropologie website and coming across brackets I loved but would never pay for, this was the inspiration to replicate a similar bracket for less than half the cost.

After a heavy duty cleaning with some TSP this “shelf” actually revealed itself to be a stair tread from the original staircase which was ripped out after the conversion of the home from a single family into a two family. The shelf was clearly used as storage for someone’s painting supplies as it was covered in different colors of paint. I liked the aesthetic of the different colors and textures of paint and decided to leave it rather than sand it off. Combined with the nails along the bullnose of the old stair tread a modern rustic look was created. Two coats of semi-gloss polyurethane were added to preserve the paint and color of the wood. 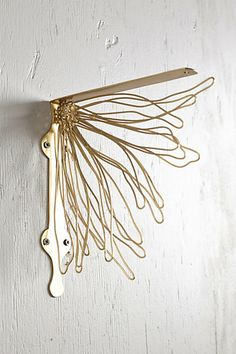 The brackets were already attached to the tread so all that was purchased was chicken wire to mimic the Anthropolgie wire bracket. I drilled holes in the top of each bracket and pulled the wire through evenly on each side. It took a few prototypes to come up with the ones I liked but after bending chicken wire back and forth for a few hours, I came up with the two I found most aesthetically pleasing. The newly created brackets were then sprayed with a matte gold spray paint, once dried I then misted the gold with a black spray paint to dull them down a bit. 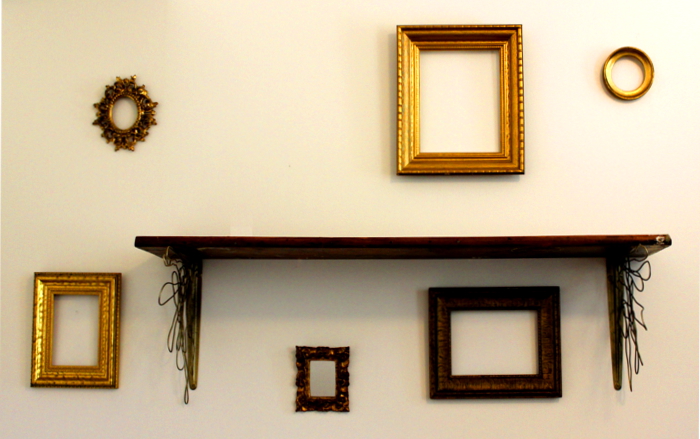 This is a strong, heavy duty shelf with industrial-like brackets most would only see in a garage, but with a little chicken wire and spray paint you now have a statement piece to dress up any bare wall. To tie in the gold on the brackets I hung a collection of antique gold frames around it which are also from the trash. The best part of this piece to me is that I now have a stair tread hanging on my wall that’s over 100 years old and was once rotting in a basement.

Want to see what else I’ve created? Find out here.