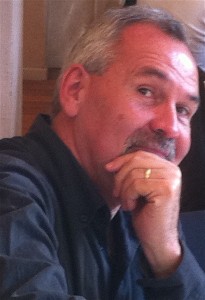 One of Will Shank’s favorite things is to post Facebook self-portraits on Throwback Thursday to remind himself of the good old days when he had hair.  He has no television but was recently riveted to Internet reports about the Scottish vote because of his concern that Catalonia, where he lives, might soon fall off the map of Spain.  He decided to become a conservator of art when the tragedy of the 1966 flood in Florence grabbed his childhood imagination, and that’s what he became when he grew up.  A twist of fate directed him toward modern and contemporary art, and many years later, after restoring Picassos and Rauschenbergs galore at the San Francisco Museum of Modern Art, he grew bored and decided that what he REALLY wanted to do when he grew up was to be a writer. “He loves nothing better than to explain to visitors to the Prado, for instance, (through the Fodors Guide to Spain) what they should see if they only have an hour to spend there…and WHY.” And to eat in the finest restaurants and stay in some pretty swell hotels (although he has recently been spotted exiting some Airbnb flats in Paris, Venice and Santa Fe).  He and his sculptor husband have a beautiful pre-teen daughter who speaks three languages fluently.