AN AUTUMN APPROACH CARS ON THE COMMON

I realize I might bring some of this on myself, but I seriously walked into the dark side this time.

Salt and I were waiting in my car to go into an appearance and I got a ping on my POF profile.  So I read it and it was well written, funny, and seemingly real.  The holy trifecta!  I showed it to Salt, my best girlfriend, to get his opinion.  He had the same thought as me, a normal boy, and we decided to bring it to the program.  Like I said, I might have brought this on myself.  Here is a brief snippet of what he said…

OK Ms Kennedy this must be a joke ! You are witty , talented and extremely HOT and you are on POF ? Either this is a joke or you are handing out the best lottery ticket of all time.

Now lets proceed as if this was a normal response (It isn’t, I hid my pics and profile in case this is a joke) You are an incredibly well spoken woman and have lots of things that should appeal to any man. Sunday paper… OMG , actually like books rather than ebooks… WOW..and you really are so very beautiful. How would someone ever find something new to do with you!!! Have you ever white water rafted on the Dead River in Maine … you should !

I am 5’ 11,  210 lbs , brown Hair and blue eyes, I still stay active in sports and have a very good job here in Boston. I will have lots of free time when the kids head back to school in a couple of weeks. I am a dog lover and thrill seeker, as are you.

I don’t want to write too much. I will send you pics of me if this is real. I certainly hope it is. Good luck in your search.

I responded saying I loved his letter and would love to chat.  We talked about it on air the next day and how I didn’t need to see his picture.  How, it might be nice to start a courtship without the preconceived notions about appearance.  I mean he had done the full Google search on me and I didn’t even know his real name, but again, I brought this on myself.  He – who will for now be called Faceless Joe – “happened” to be listening and called in right away.  Mike, our producer, wanted to get him on air, but he didn’t want to, so what are you going to do.  I figured, maybe we’d meet, see how it goes, you know the drill.  I got another message on POF and he said “I’m going to avoid listening and getting all caught up in the radio stuff”.  This was music to my ears and literally the BEST thing anyone who ever wanted to date me could say.  I was thrilled.  It was short lived.  Because the next break we did on air resulted in a text from Faceless Joe pertaining to what I had just said on air.  So much for staying out of the radio part.  At this point he tells me his whole office wants to call in and talk about him and he indeed gets his admin assistant (so I know he has one) to call in.  That afternoon I had an appearance in the city near to where he worked.  It was a pretty quick event and as I was heading back to my car I get a text saying “you left before your delivery”.  He was having flowers delivered.  But that’s not all.  He was there.  And was standing right next to me. 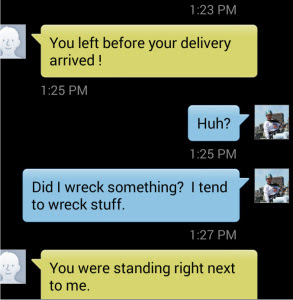 To further his point he sent this. 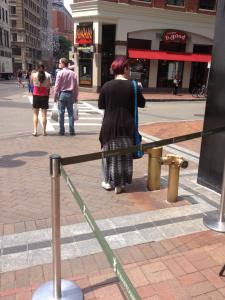 That’s me. That shit is bananas.

We exchnged a few more texts, spoke on the phone once, and I figured this might go somewhere.  Wrong is a not a big enough word.

Friday mornings we have David Wade in studio with us for the 8 O’clock news and he asked me to close my eyes as he entered the studio.  During his news break, he brings up a dozen RED roses.  Where did they come from?  Some guy who was waiting outside.  Yep, Faceless Joe was outside waiting by the door for someone to let him in.  He was standing outside the door of the studio for the entire break.  As he stood in the hallway listening to me lose my mind over some dude sending me red roses and being let in the building he must have thought better of it and left.

Wednesday I thought I had landed a big fish. By Friday the fish just stunk.