THE HOUSE OF NEUMANN 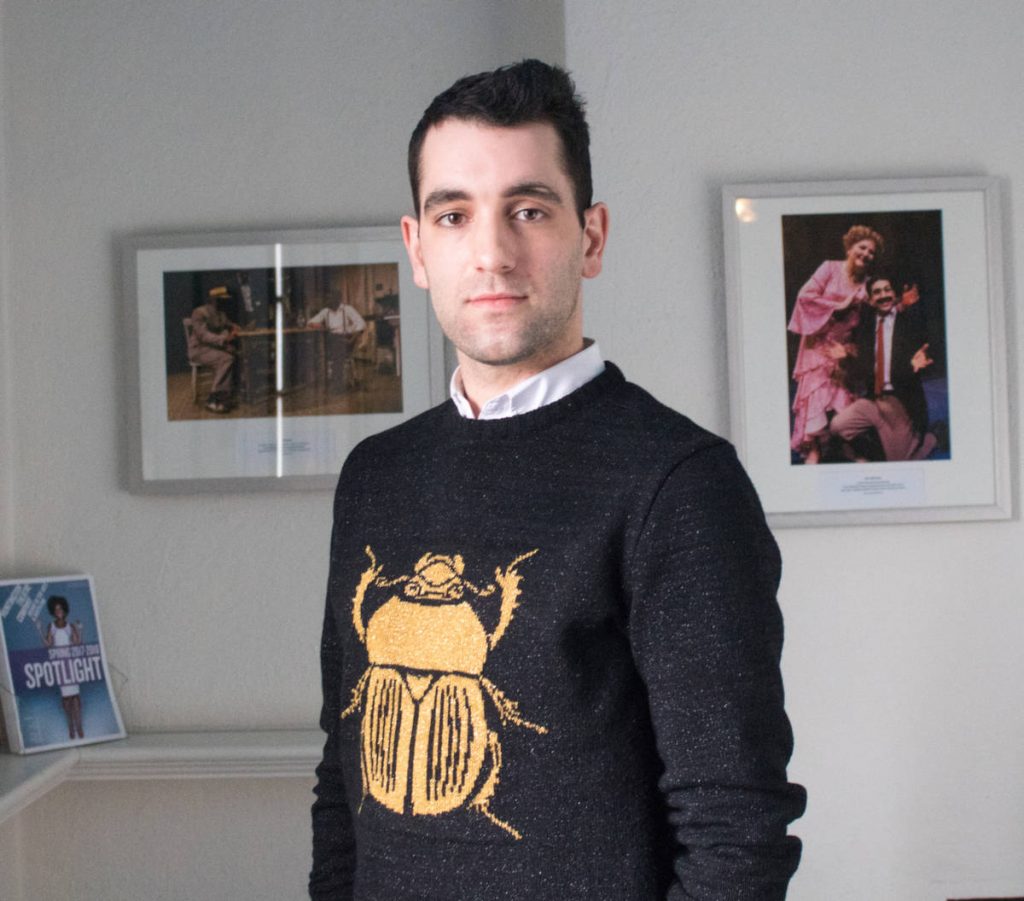 I spent the morning of the dress rehearsal chatting with costume designer Charles Neumann, who was handpicked by director James Darrah of the Boston Lyric Opera to bring the characters to life through his signature costuming. Having known each other from working together at Central City Opera in Colorado upon Neumann’s graduation in 2011, their long history afforded the BLO with a treat in costuming rich in background, design, and story that will be a true delight for the audience in the upcoming production of “The Threepenny Opera” this Friday at the Boston Lyric Opera House. (I’m entranced by the description of one character’s costume, which turns out to be Neumann’s fave as well.) Read more to find out the ins and outs of what goes into developing a costume wardrobe for a full-scale opera production and how a ready-to-wear fashion designer makes the jump from clothing design to costume design.

What is your background in fashion?

I graduated in 2011 from Lasell College in Newton with a BA in apparel design and production and went from graduation to Central City Opera in Central City Colorado for their summer season. I have been working since then on project commission work for smaller opera companies. I do a lot of ready-to-wear, but wanted to transition to costumes.

How would you describe your brand?

Women’s ready-to-wear, separates, mix and match separates, geared towards an “eye on the past”—a weird forward-thinking retrospect. My style details are pulled from fashion and apparel history. I like to use modern silhouettes, mix them. For example, if you had your two favorite people, what would they wear if we were on a date? I came up with long silhouettes with a heavily distorted hounds tooth. I love to create jarring juxtapositions favoring bohemian, or earth wanderer aesthetic. I use lots of hand beading and have a sharp eye for high quality production. It has to be 100 percent perfect. If you were to describe my brand in three words it would be: sharp, nostalgic, bohemian. 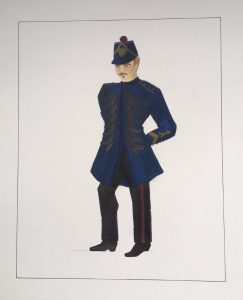 How does this tie in to your costume design choices for the BLO?

James Darrah approached me to do it—I met him at Central City, he was an [artistic director]. He followed my work, and came to me and said I’m doing this opera. Imagine existing in this world where your clothes are the only viable option for these people. I was immediately intrigued. He described this world that exists without a time or place. It feels new, and interesting, but also feels very familiar. It has an eye on the past. When you see the opera you’ll see that it’s my signature brand. There is lots of attention to handwork, mixed materials, lines very similar to what I typically work with.

How would you describe the aesthetic of the costuming for ‘The Threepenny Opera’?

It’s lovely, but it’s NOT lovely. It has a weird back and forth. Everyone exists on the same social level. No one is higher than anyone else. But everyone is scheming and planning to step all over everyone else. Your personal visual can take a step backwards when you have slipped away. The clothes become tattered, thread bare. Imagine a trunk in attic, filled with Victorian clothes, that when you touch they fall apart. You can tell they looked very beautiful at one time. “The Threepenny Opera” costumes feel like “all things forgotten,” melancholic, dark, and sad. Jarring, because the music is sharp and aggressive but also sad, and soft. A great example and signature piece is Lucy’s yellow velvet coat: sharp harsh lines, but contrastingly very organic.

How did you get into the design mode for this opera? What was your inspiration? Did you watch other productions or read the script, listen to the music?

Definitely a combination of all of the above. I read the script 100 times. It was really important for me to think about: Who’s going to wear these garments, what are they like? It’s harder than [ready-to-wear] because clothing is a signifier, a personal billboard to tell people this is how I feel—this is who I am. I had to do this for each of the characters in the show. Who were you? What did you do? How did you get where you are? Psychological profiles of how they see themselves and how they would show others how they see themselves. I watched 1920s versions of the show, as well as ’30s and ’40s. Used some of the elements from notable productions for the main character Mackise. 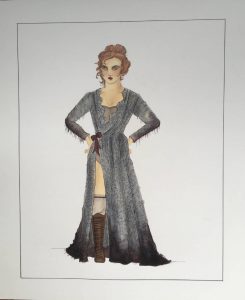 Which character did you relate to the most?

There were two. Jenny Diver, had this long history with Mackise, the villain. She’s sort of removed, aloof, always watching always seeing. She sells him out not once but twice to the Peachums to get him hanged. She has a similar aesthetic to mine, she wears this beautiful lace dress that has been worn and worn the hemline is tattered. She feels nostalgic and melancholic. It’s the main signifier of my look, by aesthetic and brand. The second one is Lucy Brown, the daughter of the chief of police. She’s certifiably crazy. Wearing yellow velvet coat with big portrait collar, sharp angular lines reminiscent of designers Viviene Westwood and Yoji Yamamoto. She’s driven crazy because she fell in love with this person who doesn’t love her back. That’s how I am with my work. 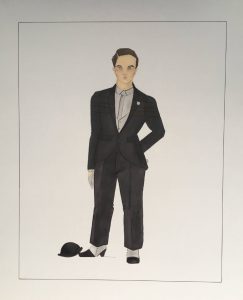 Macheath (aka Mac the Knife)

I know this has been your first large-scale commission for the performing arts following your work with MetroWest Opera. How has it been working for such a large-scale production and what were some of the challenges?

It’s been wonderful. The people at BLO have been a dream to work with. We are all vibrating on the same frequency, the director, lighting, set designer, all existing on the same frequency. What’s been tricky is I’m typically committed to an image, and to a process, but with opera things are always evolving. You get a lot of “This doesn’t work lets change this.” And you have to run with the punches. And, you’re running EVERY second. Like getting a call at 8 p.m. the night before the dress rehearsal (last night) with a “We need XYZ, can you get that?” It’s definitely made me become adaptable to change.

How many people are on your production team?

Quite a few: a project manager, an assistant, Costume Works in Somerville—they are a costume company for BLO, Disney— a patternmaker, and Liz Perlman who owns Costume Works and built and fabricated the yellow coat. It’s a team of about 12 to15 people working with me from fittings, pattern making, assembling, and altering. We’ve been working together for six weeks. Actually, today is the first day we will see all of the clothes living in the set, on the actors and under the lighting. It’s exciting, intimidating, and joyful all at the same time. I’m waiting to see these clothes exist on stage. If anything needs to be altered or changed luckily, there is time before the show opens.

Were there budgetary constraints on the wardrobe?

BLO had a great budget to work with. I had designed the show before I knew what our physical budget was. It was submitted to the costume shop. They did a price breakdown of what it cost. Our principal costumes if they have something specific, those things we build from the ground up. With the supporting and chorus, those are pieces we pulled and bought and altered. It wasn’t a challenge. I’m very thrifty anyways. I’m good at getting a great look for not a lot of money. I do this in my own designs for my clothing line—I don’t think that fashion should be isolating. I feel like it should be accessible.

What is your favorite costume of the show?

A couple. Lucy’s yellow coat. It’s so beautiful. It was a triumph in making it. When I suggested this coat at our initial meetings at BLO everyone was wanting this coat. …When it came to how are we going to make this, Liz Perlman, she was like “I got this.” She was able to take what existed on the page and turn it into reality. It’s super soft, very hard, draped structured. It was an achievement to make this coat. This velvet is covered in all these custom dyed chiffon flowers. I built one dress for the opera—the dress to be worn by Jenny Diver. It’s a chiffon dress with open work on top made of gray lace. It has shine with its asymmetrical bodice. It’s beautiful, very well built, floor length with a small train. I used several bones in the bodice. The whole bottom of the dress is cut away leaving a soft organic hemline. The best part was we submerged the lower half in water and painted into it with browns, grays, blacks, all dirty tones so it really looks like someone was wearing this beautiful dress for years, walking through back alleys and streets. We built and added all those years into the dress by distressing and staining it. It feels beautiful but sad. It is one of my favorite pieces. There is high melancholy in it. A dress with a long history. 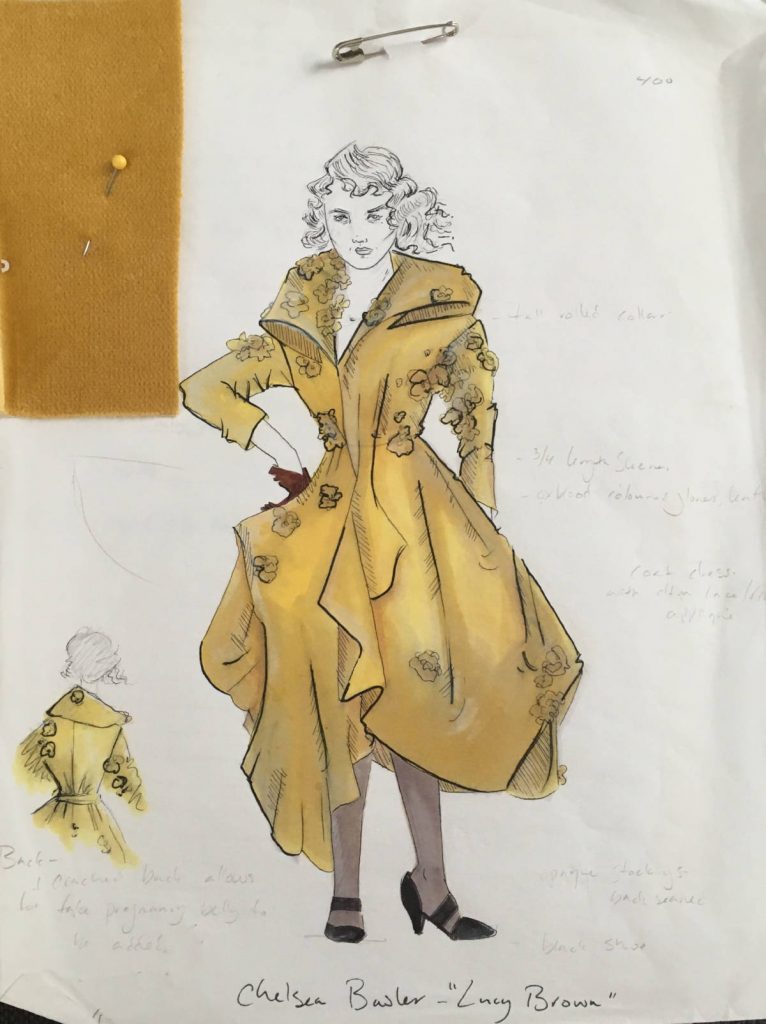 What are the differences between creating costumes for an opera versus designing a collection for fashion show?

It’s really the target audience. When designing a collection for the runway you come in with a concept, create an image. With a runway show, you’re in a tighter avenue. You know who your ideal customer is, your target audience. With an opera you are creating an image aesthetic, but it’s like real life, everyone has their own style, so it’s not necessarily the same, so it becomes harder because you’re trying to work in an overall aesthetic, but be true to each character’s personality. You must do intense psychological breakdowns of each character but be true to this world you created. It’s more involved doing costuming.

What are the plans for the costumes after the show ends?

They will go back to Costume Works. They will be cleaned and get packed away. They go into the BLO stock. For any future shows, they can be pulled. There is an opportunity if BLO is in love with the show, they can freeze the show and the costumes don’t get broken down, and it can get rented to other productions all over the country. In any event, the BLO owns everything.

What is your next project?

I am working on a fall collection inspired by Hypnos, the Greek god of sleep and the image of the world in which he dwells—a cave filled with poppies, where the river of forgetfulness stems, a world without light or sound.

For more information on tickets to the performance go to https://blo.org/the-threepenny-opera