DENZEL, TAKE 2! ‘THE EQUALIZER’ RETURNS TO GIVE BOSTON A CLOSEUP 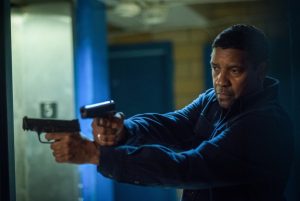 Denzel Washington does it again! In his first career sequel, Washington is back as the retired agent Robert McCall in “The Equalizer 2.”

In addition to Washington, director Antoine Fuqua returned to helm EQ2 as did actors Melissa Leo and Bill Pullman. The film also features Pedro Pascal and Ashton Sanders. Talks of an “Equalizer” sequel started months before the 2014 release of the original. The film follows McCall (Washington) as he sets out “on a path of revenge after one of his friends is killed.”

Filming for EQ2 began in September 2017, with crews spotted in Union Park in Boston’s South End, the North Shore, including Lynn, Larz Anderson Park in Brookline, and Randolph and Marshfield.  In 2017, Darryl’s Corner Bar & Kitchen shared a post its Facebook page about EQ2 — with a photo of  Washington in the South End eatery.

Getting a chance to catch a sneak peek just a few days before the sequel arrives in theaters this Friday, I’ll say this much [without any spoilers, of course]:

Expect a thrilling, at the edge of your seat ride watching Washington reprise his role as the people’s hero. The character that we loved to love the first time around comes back just as vengeful and just as righteous – contradictory character traits that Denzel can genuinely and successful bridge with ease.

But if Washington isn’t enough of a reason for you to add him to your Friday night plans, I’d suggest you go for the eye candy; for the one that looks beautiful from every angle, day or night…

Yes, I’m referring to Boston! You may or may not geek out a little when recognizing some of our streets and neighborhoods on the big screen, but I am certain that you’ll appreciate it.