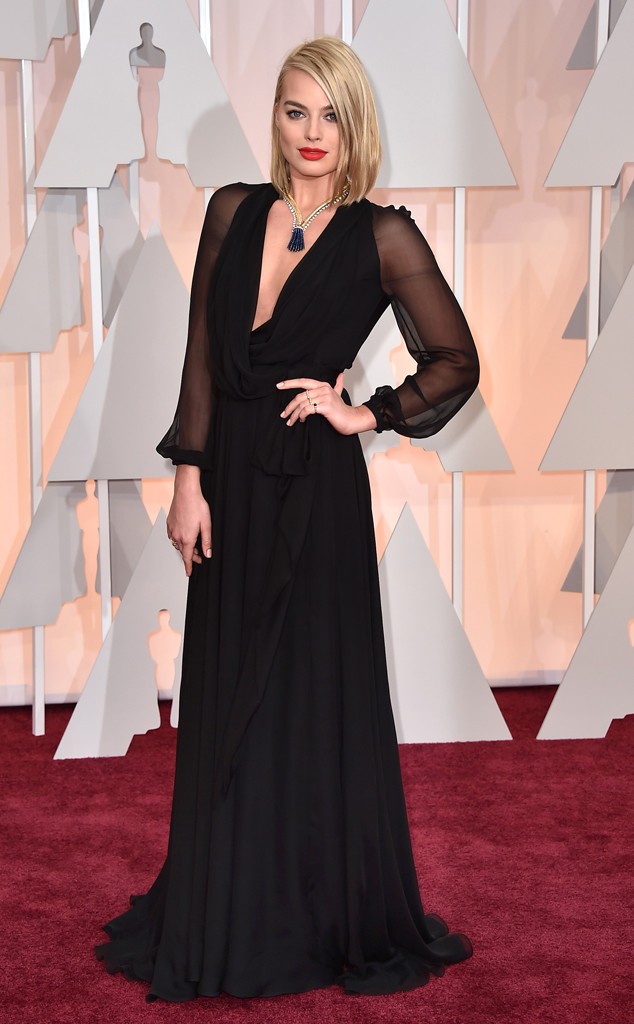 END_OF_DOCUMENT_TOKEN_TO_BE_REPLACED

GOLDEN GLOBES…WHO NAILED IT, WHO DIDN’T

I look forward to the Golden Globes the way football fans anticipate the Super Bowl. It tends to be one of the award shows where people still take risks. However, this year’s gathering proved to be a rather non-risky one. Trends on the red carpet were: for men, velvet for jackets, sharp lines and a throwback to the ’50’s.

Kevin Spacey looked sharp as ever in his Hugo Boss tuxedo. According to his stylist Johanna Argan, who recently got nominated for the CDG Award for Contemporary Design for his show “House of Cards,” she put Spacey in the Hugo Boss shawl collar tuxedo “because they wanted to go for a classic rat pack feel.” It must have been his good luck charm, because after seven years of denial, Kevin went home with his first Golden Globe.

For women, we had some bright pops of white, Kate Hudson, my pick of the night, in Versace, Rosamund Pike in Vera Wang, Emily Blunt, and Sienna Miller to name a few. Kate really brought it home in a deep plunging neckline and crystal straps covering mesh cutouts in a very sexy (and sensual) white gown. There was no mistaking the Versace brand in Kate’s gown–reminiscent of the famous Elizabeth Hurley safety pin gown by Versace many years ago.

Not all starlets were as daring and successful as Hudson. Some played it safe such as Amy Adams with her blue one-shoulder dress and “ho hum” hair. She seemed to be attempting that Hollywood glamour with a unfussy touch, but her hair came off unpolished and not Golden Globe-worthy, it even had a frizzy fly-away look when the light hit it when she was accepting her award—the horror!

TOP LOOKS FROM BEST TO GREAT 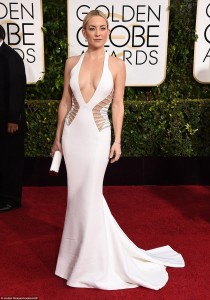 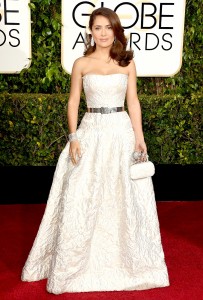 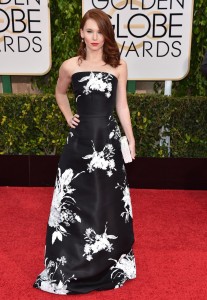 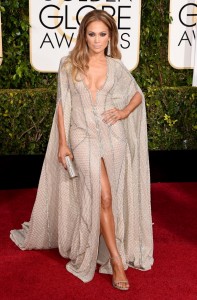 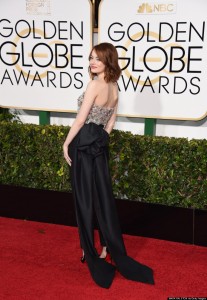 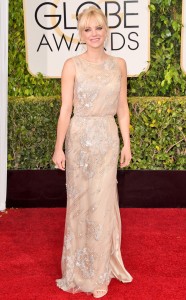 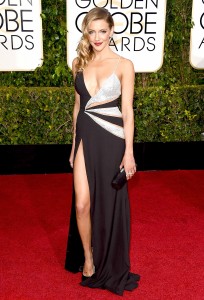 Plunging necklines were a theme, done successfully by Sienna Miller, J Lo, Kate Hudson, and Jessica Chastain. Though I rarely like Jessica Chastain, actress in “A Most Violent Year”, she really successfully pulled off her look, the bronze/black pleated low cut halter dress and old Hollywood deep side hair part came together beautifully.

Allison Williams attempted Old Hollywood hair with a deep side part and a faux bob. Her hairline had a too-pulled-back look that made it seem like she was wearing a wig—not the look I’m sure she was attempting for the Golden Globes Red Carpet. Her red Armani Prive sparkly tiered gown made up for the bad hair. And I must add that her makeup did her no favors either. She’s truly a beautiful girl, just had a hair and makeup FAIL for the Globes.

BOTTOM LOOKS FROM WORST TO BAD: 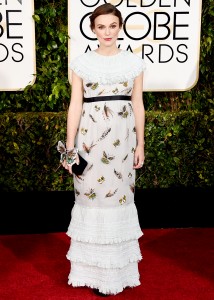 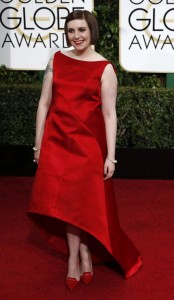 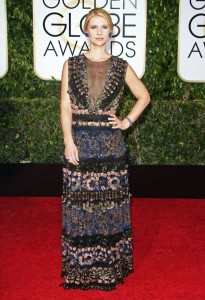 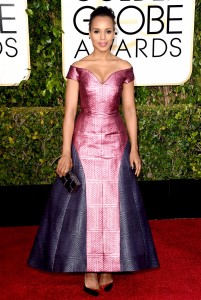 Feathers and sparkle were also ever-present on this Red Carpet. Some ups and some downs: Kiera Knightly for “Imitation Game” had a huge FAIL in Chanel Couture. She bragged about how 30 seamstresses sewed the dress in a week, but I think they should have used less seamstresses and focused on ONE good designer to draft the pattern. The dress was billowy and looked like a couture potato sack with a ruffle top to boot. It did a huge disservice to pregnant women everywhere. We know you can look hot when pregnant, why couldn’t Chanel do something fitted for Kiera? Chanel should have taken some notes from Givenchy if they wanted to do feathers and sparkle. Julianne Moore was stunning in her Custom Givenchy.  But not all feathers won out. Another feathers fail was Claire Danes in Valentino. The “Homeland’ actress’s mesh top with feathers a plenty had horrible fit-it seemed to hang on her lithe top, in a heavy and unflattering way.  Emma Stone was a breath of fresh air in the sparkle category. She wore a relaxed pantsuit with a sparkle strapless top cropped cigarette pant legs and a huge obi type black satin bow in the back.

Other relaxed looks of the night, some successful and some not so successful were: Ruth Wilson yes, Melissa McCarthy no, Katie Cassidy yes, Kristin Whig no, Lena Dunham no. Apparently Zac Posen was a former babysitter of hers and dressed her. I think he was skimping on the tailoring, maybe because her parents only paid him $4.75 an hour for his services back in the ’90’s. Lena prides herself in not caring about her looks. But please, if you are going to go to the Globes hire a makeup artist.