BOSTON – 500 guests turned out for the Breast Cancer Research Foundation‘s 14th annual Boston Hot Pink Party, which raised more than $2 million for breast cancer research. The BCRF has awarded more than $8 million in grants this year.

The swanky gala recognized New England Patriots Coach Bill Belichick and his girlfriend, Linda Holliday, with the organization’s Carolyn Lynch Humanitarian Award for their commitment to breast cancer research that stretches back to several years. This year’s Hot Pink Party was held on Tuesday, April 23, 2019 at the InterContinental Boston hotel.

The BCRF was founded by Evelyn H. Lauder in 1993 and she served as the organization’s chairman until her death in November 2011. In 1989, Mrs. Lauder initiated the fundraising drive that established a state-of the-art breast and diagnostic center at New York’s Memorial Sloan Kettering Cancer Center. That facility is known as the Evelyn H. Lauder Breast Center.

She and her husband, Leonard A. Lauder, who attended this year’s Hot Pink Party in Boston, were committed to providing the most innovative clinical and translational research for breast cancer in the world. Styleboston’s Terri Stanley spoke with Mrs. Lauder at the Hot Pink Party in Spring 2010 about the BCRF and her many roles with The Estée Lauder Companies, Inc., including serving as senior corporate vice president and head of fragrance development worldwide until her passing.

At this year’s Hot Pink Party at the InterContinental Boston, the stars turned out to honor Coach Belichick and our styleboston colleague Linda Holliday.

Gov. Charlie Baker told TV station WHDH that the recognition is well-deserved. “I certainly think if you’re looking for a symbol of excellence over time, which is in many respects what this foundation has been all about, they’re not going to find a better one than what Coach Belichick has accomplished.”

Recently retired (it kills us to write this) Patriots player Rob Gronkowski was on-hand to celebrate his former coach, including taking a turn at the DJ table. Gronk brought along his lady friend, the model Camille Kostek. Breast cancer survivor Paqui Kelly and her husband, Notre Dame football head coach Brian Kelly, presented the award to Linda and Bill.

OFF THE FIELD | TOM BRADY

There’s been a lot of negative coverage lately around Tom Brady but no matter what anyone thinks about Deflategate, he’s a stand up guy when it comes to Best Buddies. He’s been involved with this charity for years and just hosted another successful event in Hyannisport this past weekend. He’s generously given his time and money to support the organization, so he’s a touchdown as far as we’re concerned. We were lucky enough to talk to Tom after a previous race, check out Linda’s Off The Field.

The event honored actress Elizabeth Hurley, a longstanding advocate and The Estée Lauder Companies’ Global Ambassador for Breast Cancer Awareness, as well as ABC News Anchor and breast cancer survivor Amy Robach and her husband, Andrew Shue. Also in attendance were designers Tommy and Dee Hilfiger and Fidelity’s Peter Lynch. The 10th Anniversary of the annual gala featured a special performance by Broadway star Megan Hilty as guests celebrated their local commitment to the global health issue of breast cancer, upheld by the night’s theme: “Pink Locally, Act Globally.” styleboston’s Zoey Gulmi was there and has all the interviews you want to hear… 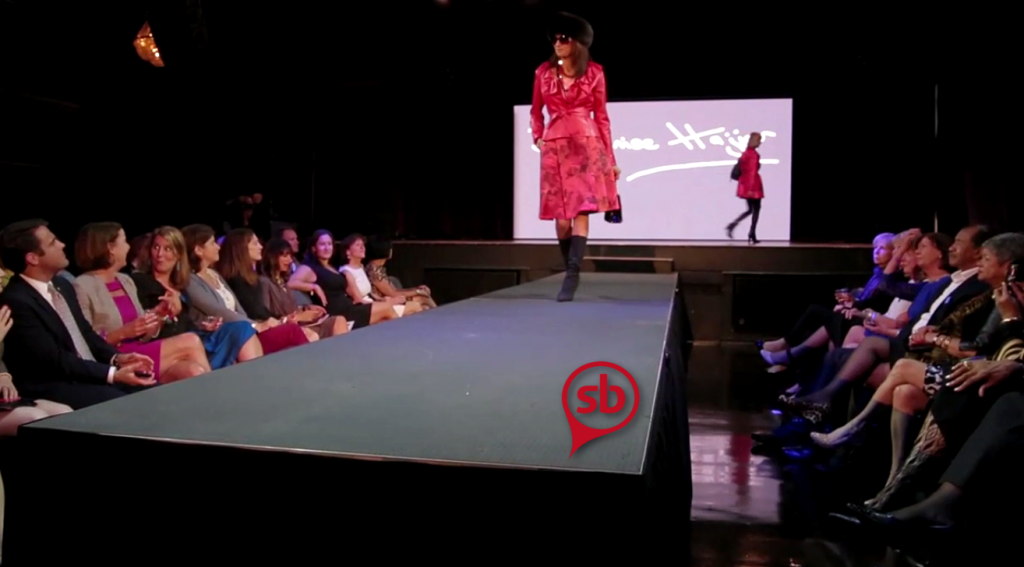 Styleboston was at Royale nightclub to show our support for the Dress for Success Boston event featuring designer Denise Hajjar. Headlining for the 6th year in a row, Denise had some of Boston’s most fashionable women participating in the evening, raising money and awareness for disadvantaged women looking for a fresh start in the workplace. We chat with Linda Holliday, Janet Wu and Yolanda Cellucci, who all walked the runway wearing the designer’s latest collection, as well as Denise Hajjar and the co-founder of Dress for Success, Nancy Schneider.