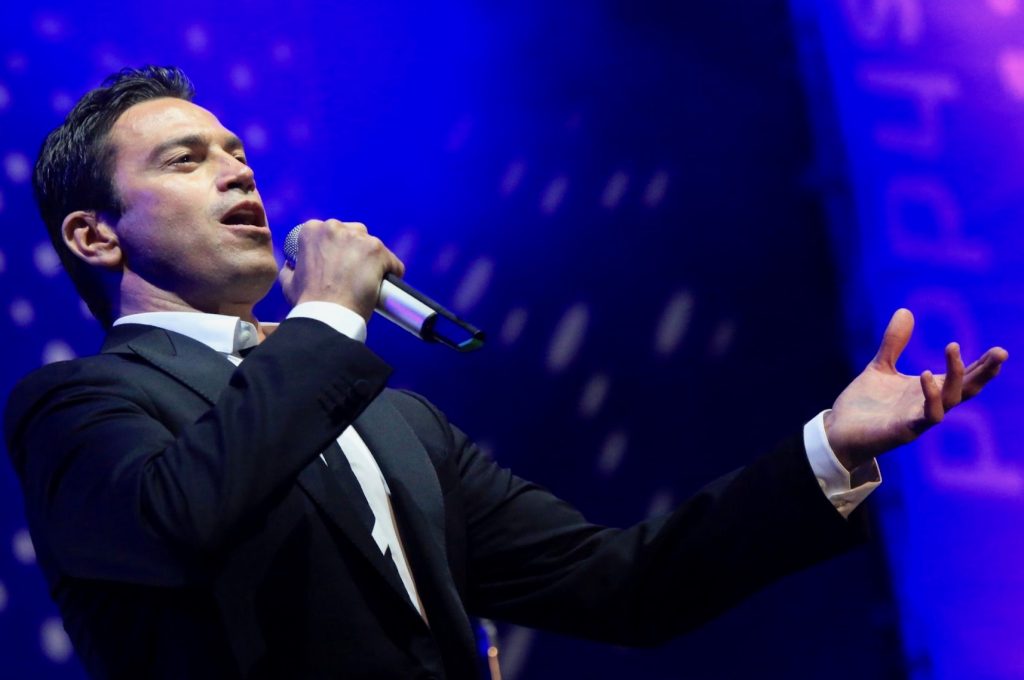 There’s no mistaking when Mario Frangoulis takes the stage. The only thing that is crisper than his clothes is his remarkable voice. A sterling tenor that has taken this singer-actor to some of the world’s greatest stages and allowed him to perform in opera, classical theater and popular West End musicals. Born in Africa and raised in Greece, Frangoulis was trained at London’s Guildhall School of Music and Drama where he was discovered by legendary Broadway creator Sir Cameron Mackintosh. His “Mario Frangoulis: Sing Me An Angel” tour launches on Saturday, March 25th at the Sanders Theatre at Harvard University in Cambridge. The concert starts at 8 p.m. Tickets are still available. (https://www.mariofrangoulis.com/concerts)

STYLEBOSTON: Classical performers, particularly tenors, are known for being put together (tux, tails), but traditionally haven’t been known as fashion-forward trendsetters (those tux, tails). And then there’s you. You have made headlines for your “style.” Where does your sense of style come from?

MARIO: I have always cared about fashion and how it is influenced by the various changes in our society, the political climate, the style of music and the arts. In so many ways, styling itself gives an “identity” to an artist, “signature” clothes, and one’s own style. I have been extremely lucky to meet great designers at such a young age in my life and career. Donna Karan, for example, dressed me on my first album “Sometimes I Dream.” Valentino designed my first tuxedos early on in my career and let me launch his Red Label tuxedos. Giorgio Armani designed all of the suits, costumes and clothes for the movie “De Lovely” starring Kevin Klein and Ashley Judd in which I wore a great Shakespearean period costume designed by Armani himself! He was also a very cool person to meet. Lately I have been dressed exclusively by Ermenegildo Zegna.

STYLEBOSTON: Do you have a favorite designer? A favorite piece in your wardrobe?

MARIO: I had the chance to meet the unique Ralph Lauren at an exclusive party at Bloomingdales and I have to admit that his casual-wear clothes are the best! Very comfortable and all time classic. I have many jackets by Ralph Lauren that I also wear with jeans for press conferences and casual smart occasions. One of my very favorite designers these days is Tom Ford. His tuxedos are incredible —especially the great thick and old-fashioned but contemporary lapels. Tom Ford’s tuxedo has to be my favorite piece in my entire wardrobe! 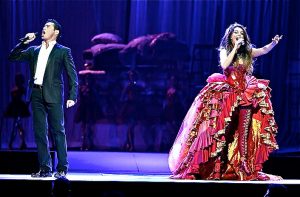 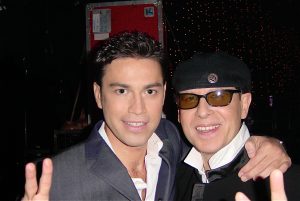 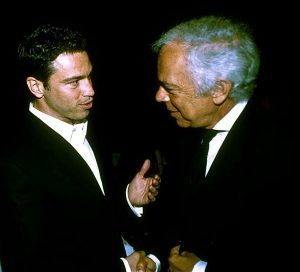 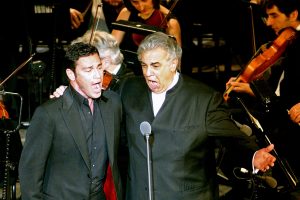 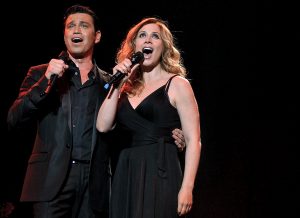 STYLEBOSTON: Just as you have made an impression for your style, you are known for your versatility on stage. Do you prefer traditional opera over Broadway or West End musicals? How does traditional Greek music fit into your repertoire?

MARIO: Opera is my first love. West End musicals, however, especially “Les Miserables” was my first big adventure on stage. The costumes were actually designed by the Greek-Cypriot English costume and Tony Award-winning designer Andreane Neofitou. Playing Marius, the romantic lead, gives me so much theatrical and stage experience.

As you said in your question, I truly enjoy being versatile on stage, and this really represents who I am. I enjoy being different in every role I play: from Raoul in “The Phantom of the Opera” to Tony in “West Side Story” at Teatro Alla Scala to the King in “The King and I” and so many leading roles in ancient Greek drama, like “Prometheus Bound,” a Titan who defies the gods and gives fire to mankind, acts for which he is subjected to perpetual punishment. Achilles was a great role for me in the ancient theatre in Epidaurus in the year of the Olympic games in 2004. It was the first time this great Ancient Greek play was presented after 2,500 years. It is a trilogy by the great dramatist Aeschylus and was so full of great adventures, heroic battles and fate itself which one cannot escape from. Dionysus, however in “The Bacchae” was the most challenging of all roles. Dionysus, the protagonist of Euripides, “Bacchae,” is one big contradiction. The character embodies many of the dualities that we see throughout the play. First of all, in some ways he represents both human and god. Dionysus definitely has all the powers of a god. He summons earthquakes, lightning, and has a knack for getting into people’s heads, driving them insane!

Another interesting duality is that Dionysus is foreign and Greek at the same time. He was born in Greece, but his religion, for some reason, first spread in Asia. Another contradiction is that Dionysus in some ways represents both male and female. Yes, he is a male god, but the mortal form he takes is said to be quite effeminate. Dionysus also had a strange birth. The play itself is full of dualities and that is what I love about it!

Perhaps the play is trying to say that everything that exists is also its opposite at the very same time—more specifically, that we as human beings are inherently contradicted. We’re all both rational and irrational. All humans are animals, but there’s also something special that undeniably separates us from the rest of Earth’s living creatures.

Though we all (or at least most of us) belong to one gender or another, there are things about all of us that don’t quite fit into the role that society prescribes to specific sexes. Even though everybody is from somewhere, we’re all a foreigner somewhere else. Sometimes we even become foreigners in our own homes. Lastly, even though we’re certainly mortal, maybe, just maybe, some part of us is eternal and divine. It seems to us, that in the character of Dionysus, Euripides captured many of the amazing contradictions that make up every human being. 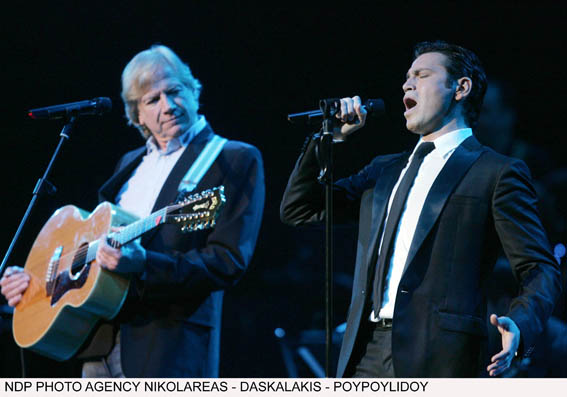 In music and in theater, I must be flexible, adapting to what’s happening around me, and experimenting with new and unique combinations of music and acting skills—this also translates to my sense of personal style. Life is a mosaic of experiences that make up who we are—there is no one “right” way to do anything…everything I do has to do with my truth, my feelings and my identity. That is why Greek music is always part of my repertoire—not only because of the beauty of the language, but also because it is core to who I am and my identity as a human being. I can’t imagine a performance without Greek music…my style is the same way… in everything I do I strive for simplicity… I was trained to respect simplicity in my voice/singing, I was raised to admire simplicity in my personal life, and my aesthetic reflects this value.

STYLEBOSTON: Do you have a favorite stage to perform on or favorite venue to perform in? A favorite performer to appear with? Or, symphony to perform with? (No pressure to say Symphony Hall or the Boston Pops…)

MARIO: I love Keith Lockhart and the Boston Pops! Symphony Hall in Boston is an amazing venue and acoustically one of the best in the world. We did an “epic” show there in 2012 that aired on public television across the country and I will never forget it. I have performed in Boston many times. It is one of my favorite cities to perform in. I love the combination of history with young energy (all the students). It has a European feel to it, and it is next to the ocean, which is so beautiful. Of course performing in venues like Milan’s La Scala and my favorite Herod Atticus at the foot of the Acropolis in Athens is tough competition! But Boston is certainly up there!

I have had the pleasure of performing with such a huge range of talented artists—from Placido Domingo and Jose Carreras to Justin Hayward and Klaus Meine to Lara Fabian and Sarah Brightman to Natalie Cole, Tina Arena and Smokey Robinson. The list goes on and on!

What I have enjoyed so much about Boston are the fantastic young and talented musicians, many of them from Berklee College of Music. I have a passion for supporting young musicians and I love to walk the halls at night when we are rehearsing and feel the energy of all of that great young talent ready to take over the world.

STYLEBOSTON: How did it come to be that Boston was the first location on this US tour?

MARIO: We have been talking with my team for a while about returning to one of my favorite venues in Boston—the Sanders Theatre at Harvard. That theatre is amazing and the acoustics are fantastic. We’ve always performed great shows on that stage full of amazing positive energy. I always get so much energy and love from this city and have many friends here who I can call my family. We decided that since WGBH has been such a supporter over the years, and we got a great date to start the 2017 concert series here, why not “come home” to Boston?

STYLEBOSTON: Do you have any favorite haunts, places or stops in Boston?

MARIO: Of course I love to walk around the Boston Common and Newbury Street; Harvard Square and brunch at the Charles Hotel is always a great favorite! Lobster and crab at Legal Sea Foods on the Harbor is great as well. There is a long list and it, of course, includes Symphony Hall, and also Harvard Yard. I love to walk in Boston. Bostonians have a certain casual sophistication that makes me feel very at ease.