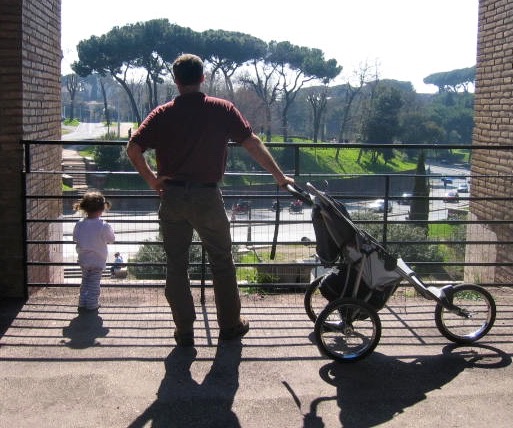 Among the many pearls of wisdom shared with us as we were packing to leave San Francisco for a six-month stint at the American Academy in Rome a decade ago was this: leave behind that dainty McLaren stroller that your one-year-old has been so happy in, and invest in a jogging stroller.  In fact, the average American toddler vehicle is no match for the ancient stone streets of Rome.  Although little Stassa still had to survive some bone-rattling tours through the Eternal City while hanging onto her bottle for dear life, the sturdy jogging stroller (which we had picked up second-hand before leaving northern California) survived our half-year stay in Rome, and then some.  We subsequently had a ceremony to say goodbye to it in a dumpster on the Greek island of Crete, after it had admirably served its purpose. 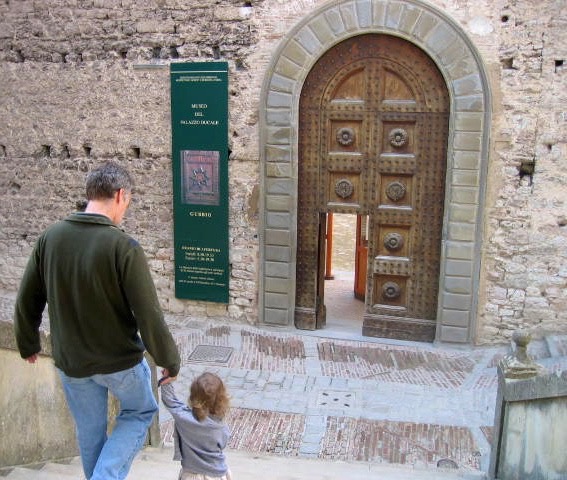 Stassa and U.B. touristing in Urbino when she was one-and-a-half. The other parent is running laps around the inside of this museum!

One great frustration for us new parents as artists and art historians was having to sacrifice the leisurely strolls through museums that we had cherished in our early years together.  U.B. and I had chosen to raise infant Stassa ourselves, and we didn’t even employ a nanny until we arrived in Rome when she was a year-and-a-half old, and then only for a few hours on alternate mornings.  So usually when we set off to discover Borromini, or Caravaggio, or Bramante, our toddler daughter was with us.  A strategy that worked for us, mostly, was to take along a favorite outdoor-kind-of-toy (Stassa’s was a plastic geodesic kind of ball–a gift from a dear friend in Napa–which didn’t roll very far or bounce at all).  Then, when we set off for a baroque church or an ancient history museum, this was the routine:

PARENT ONE: Entertain junior in the cloister of the church or the piazza in front of the museum, by kicking and tossing the ball back and forth for as long as you can stand it, alternating with a game of peek-a-boo behind the cypress trees, or, if there’s a fountain, play Let’s Get Daddy Wet.  (But not too wet.)

PARENT TWO: Make a mad dash through the galleries or the historic building, making mental or written notes on the highlights to share with Parent One.

When these activities are exhausted, PARENT ONE and PARENT TWO change roles.

A hint that I almost hate to admit to: dash into the gift shop first and quickly review the postcard rack, which inevitably features the “greatest hits” paintings and sculptures on view in the permanent collection galleries, and seek them out first.

This “treasure hunt” strategy has taken a slightly different turn in more recent years since we’re occasionally able to coerce Stassa into spending an hour or so with us inside a museum.  Even for grown-ups, including artistically inclined grown-ups like us, a visit to the Louvre or the Uffizi can seem overwhelming almost from the moment you pass through the entrance.  (If the queues are long enough, it can seem overwhelming BEFORE you go through the front door!)  We have devised some unofficial treasure hunts that are best implemented if your kid has a friend with her to “compete” with.  Recently upon entering the newly re-opened Musée Picasso in Paris, we let Stassa know that her job was to find a goat, a sculpture of a bull’s head, and a painting of Picasso’s son dressed as a harlequin (we might have misguided her on that one).  It kept her somewhat occupied and mostly focused, at least long enough for her parents to enjoy an untroubled hour with the new hanging of the permanent collection in the beautiful Hotel Salé in the Marais, which we had really missed on our last few trips while it was closed for renovations.  At the Louvre, armed with the maps provided at the admissions desk, she and a friend went on a mission devised by their parents to find the route toward five masterpieces: Théodore Géricault’s “The Raft of the Medusa,” the Winged Victory of Samothrace, the Venus de Milo, Jacques-Louis David’s “The Coronation of Napoleon,” and of course, the Mona Lisa, barely visible–from their ten-year-old perspective–over the heads of a zillion visitors taking pictures with their iPhones of a distant portrait behind a couple layers of glass. 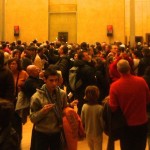 Entering the Mona Lisa gallery is simply a happening, not an art experience…but they found it! 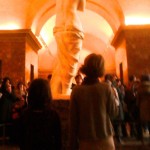 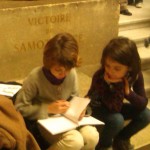 And the equally zaftig Victory of Samothrace 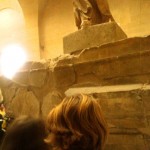 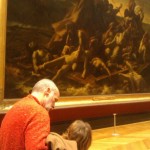 With daddy, a first look at The Raft of the Medusa 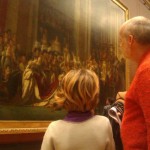 The Coronation of Napoleon

It’s too bad scooters aren’t allowed in the Louvre, as we’ve found our lives radically altered by the fairly modest purchase of three two-wheeled vehicles that we use to zip around the flatter parts of our home city, Barcelona.  Since we live in the Gothic Quarter, where few cars can fit through the narrow stone canyons, the scooter provides a terrific alternative to walking.  We’ve found that by rolling rather than walking, the family can cover a lot more ground before the moaning about when-are-we-gonna-get-there begins.  Local sporting goods stores like the French Decathlon sell adult scooters for as little as 79 euros, a small investment equal to a couple of taxi rides.* 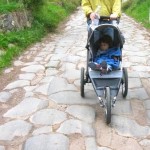 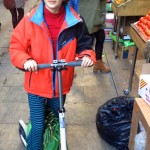 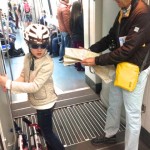 Tourists on Barcelona’s metro, with their map and their scooters! 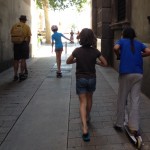 Our family and friends on scooters in Barcelona, “Wheels are faster:” 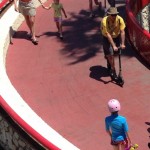 When we do take road trips (and we do!) we’ve been amazed at our daughter’s powers of concentration if an audio book is playing on the car speakers.  Assuming you can pry her iPad away from her, the magic provided by listening to a fictional (or non-fictional) tale that somehow relates to the countryside that you’re traveling through, is immeasurable.  We played “The Little Prince” and some tales from Jules Verne for Stassa on a drive from Spain toward Bordeaux.  And on road trips in the USA, a place that she likes to visit, but doesn’t really relate to culturally, she has delighted in hearing the adventures of Laura, Mary and Baby Carrie in “Little House on the Prairie” (voiced by actress Cherry Jones in the version that we bought on line).  Steinbeck’s “Travels With Charley” was less successful; maybe we’ll save that for next time.  We’ve just bought both “The Yearling” and “The Old Man and the Sea” for an upcoming trip to Florida, but we’re not sure that either of us drivers will be able to see to navigate through our tears.  Maybe we’ll just let her watch “The Deathly Hallows” on our way to Harry Potter’s Wizarding World…

Here is a link to Decathlon’s webpage that shows a range of adult scooter prices.